DELUXE | PRIVATE-GUIDED: This short vacation through Cambodia leaves a lasting impression. First, explore the capital, Phnom Penh, and visit nearby historical landmarks, including Oudong. Then connect to Siem Reap to spend several days exploring the Khmer temples of Angor Wat, some of the most impressive temples in the world. 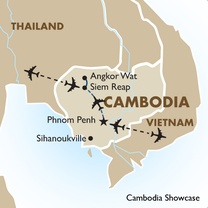 This 6-day Cambodian vacation takes you to the capital, Phnom Penh, as well as Siem Reap to explore the temples of Angkor. It features deluxe accommodations and private tours.

Your journey begins in Phnom Penh, the capital of Cambodia and the seat of the royal family. Once considered the most beautiful French-built colonial city in Southeast Asia, Phnom Penh’s beauty has faded over time, but it’s still home to some of the most distinct landmarks in the country. While based in Phnom Penh, head into the countryside to explore the various temples and palaces of the abandoned royal capital of Oudong. After a walking tour of the old capital, you’ll take part in a traditional ceremony and receive a blessing from a Khmer monk, bidding you good fortune for the coming year. The following day, explore Phnom Penh itself on a half-day city tour. You’ll visit the Royal Palace, which consists of four compounds, including the Silver Pagoda, which captures the opulence of original Khmer architecture with its 5,000 silver tiles. Afterwards, visit the National Musuem to see the country’s best collection of historical artifacts.

Fly to Siem Reap, the charming resort town that serves as the gateway to Angkor Wat. Get settled upon arrival before heading out the next day for a full-day tour of temple sites. Start at Angkor Thom, the former capital city of the Khmer Empire and a series of impressive temples, most stunning of which is the Bayon that lies in the centre and is decorated with massive stone faces carved onto the towers. Later, continue far north to Ta Prohm, one of the last temples to be rediscovered and a temple that is still largely covered by jungle growth and massive banyan trees breaking through ruined temple walls. End the day at Preah Khan, a monastery complex stretching over 56ha. Another day, visit the red temple of Banteay Srei, dedicated to the Hindu god Shiva and known as the citadel of women. You’ll also visit nearby Banteay Samre before reaching Tonle Sap Lake, the largest freshwater lake in Southeast Asia and the heart of the Cambodian fishing industry.

On your final day in Siem Reap, rise early to see the light of morning hit the temple of Angkor Wat, the largest and most impressive temple in the Angkor complex. This Khmer masterwork was built as a Hindu shrine, but you’d almost mistake it for a castle, with its large moat, thick walls, and intricated tower edifices. It’s a masterwork unlike another other temple on the planet.

At the end of your stay, you’ll connect to the airport in Siem Reap for your departure.

French colonial elegance greets guests in each step of their experience at Sofitel Phnom Penh Phokeethra an inspired 5-star hotel located in close vicinity of modern government offices businesses embassies and the charms of the riverfront. Hardwood floors and a colonial-influenced aesthetic evoke a timeless refinement in each luxury hotel room and suite. Guests enjoy a riverside setting minutes from landmarks and attractions like the Royal Palace, National Museum and Sisowath Quay.
Hotel features 201 rooms including 36 suites

Depart early this morning to visit the Royal Palace, built in 1866 by King Norodom. The Palace is made up of a number of structures within a pagoda-style compound, one of which is the Silver Pagoda. The Silver Pagoda takes its name from over 5000 silver tiles and the building itself holds a number of national treasures. The most notable treasures are perhaps the life-sized gold Maitreya Buddha, decorated with 9584 diamonds and weighing 90 kg and also the small 17th century Emerald Buddha, made from baccarat crystal. Continue on to the National Museum, a Khmer temple-inspired building that houses the world's largest collection of Khmer art sculptures, ceramics and bronzes from different periods of Cambodia's history. Over 5000 objects are on display including Angkorian era statues, lingas and other artifacts, most notably the legendary statue of the 'Leper King.' Though the emphasis is on Angkorian artifacts, there is also a good collection of pieces from later periods, including a special exhibition of post-Angkorian Buddha figures. Finish the morning with a local shopping experience at Toul Tom Pong Market (also known as the Russian Market) where you can find silk, silver and countless souvenirs. Stop for lunch at a local restaurant (included) and in the afternoon visit the Toul Sleng Genocide Museum and Cheung Ek. During the Pol Pot regime, Toul Sleng, formerly a high school, was converted to a detention centre known as S21. After interrogation and often torture, prisoners were transferred to the 'Killing Fields' where they were often tortured again and brutally killed. Visit Cheung Ek, it was a Chinese Cemetery before it became the Khmer Rouge's best known Killing Field. The remains of almost 9,000 bodies have been excavated from mass graves in this area. Today Cheung Ek is a Memorial site for Cambodians and visitors from all over the world to pay their respects for the lives that were lost. A memorial stupa has been erected and displays over 5,000 human skulls, bones and clothes of the victims. During the Khmer Rouge years, thousands of Cambodians were tortured and imprisoned in detention centres around the country; the visit is a profoundly moving but also depressing experience.

Today you visit the abandoned Royal Capital of Oudong 'The City of Past Kings'. Oudong was capital of the Khmer Empire from 17th Century until 1866 when it was moved to Phnom Penh. Several temples and religious structure dot the ridgeline and stupas containing the remains of several great Khmer Kings such as King Monivong and King Ang Duong can be found here. These hills were also the site of some of the Khmer Rouge's most prolonged resistance against the encroaching Vietnamese army in 1979. The summit of Phnom Oudong offers spectacular views of the surrounding countryside and is a favourite picnic spot for residents from Phnom Penh.

After walking tour you will receive a personal blessing by the monks in which they will perform an traditional ceremony by sprinkling water and flowers over the group while chanting for about 5 to 10 minutes. It is believed that this traditional Khmer blessing ceremony cleanses bad spirits from the past and brings good luck for the coming year. You will feel surprisingly renewed and relaxed after this memorable experience. After the blessing ceremony you will receive a small string for their wrist from the monks.

Sofitel Phokeethra Royal Angkor is set among tranquil landscaped gardens on tree lined Charles de Gaulle Avenue and is the closest hotel to the ruins of Angkor Wat. The resort is near traditional markets, local tourist attractions and only 15 min drive from the airport.
Combining French and Khmer architecture to provide elegant accommodation, the hotel features 238 rooms with balconies.

This morning, you will visit the monumental magnificence of Angkor Thom, last capital of the Khmers, with its Elephant Terrace, the Terrace of the Leper King and the stunning Bayon temple. This 12th century masterpiece lies at the very centre of Angkor Thom and is an archaeological wonder of symmetry and grandeur. The exterior gallery walls have extensive bas-reliefs but the highlight is the 'faces', more than 200 of them, silent but with the famous half-smile playing on their lips. PJ de Beerski wrote of them; godliness in the majesty and the size, mystery in the expression.

This afternoon, you will visit Ta Prohm, the temple that has been left largely in its natural state since its rediscovery by French explorers. Surrounded by jungle, its labyrinth of stone hallways is overgrown with the roots and limbs of massive banyan trees, which envelop the stone like tentacles. It is one of the largest temples at Angkor, dedicated in 1186. Historians have noted its mystical charm. Continue to Preah Khan "The Sacred Sword", an extensive monastic complex covering over 56 hectares built by the Khmer King Jayavarman VII as a monastery and teaching complex. It is one of a group of temple complexes situated on a small 'Baray'.

This morning, you drive to Banteay Srei; the citadel of women - a tiny, enchanting temple, which is one of the jewels in this remarkable city. Built of red sandstone in the tenth century and dedicated to the Hindu god Shiva, the carved male and female figures in the niches are exquisitely executed in both style and proportion. This is the most Indian of all the temples in Angkor and in the words of H.W. Ponder, is a fairy palace in the heart of an immense and mysterious forest. Continue to Banteay Samre, is built under Suryavarman II and Yasovarman II in the early 12th century, it is a Hindu temple in the Angkor Wat style. Named after the Samré, an ancient people of Indochina, the temple uses the same materials as the Banteay Srei. This afternoon, drive to a development project teaching young adults, stone carving, wood carving and lacquer application, Les Artisans d' Angkor is a heart warming reminder that progress in Cambodia can go hand in hand with traditional crafts. Then continue to Ton Le Sap Lake, the largest fresh water lake in South East Asia, is the lifeblood of the Cambodian fishing industry. The Mekong River, from as a far away as Phnom Penh, reverses the direction of the Ton Le Sap river to bring an overflow of water and silt to support both rice growing and the breeding fish of many sizes and varieties. Hopping on board small shaded vessels and moving between the floating homes and small fish farms you will experience close up, daily lake life.

This morning, you will visit to Angkor Wat, the largest temple in the world, with a volume of stone equalling that of the Cheops pyramid in Egypt. It is unlike all the other Khmer temples in that it faces west, and is inspired by 12th Century Hinduism. Conceived by Suryavarman II, Angkor Wat took an estimated 30 years to build. It is generally believed to have been a funeral temple for the king. Intricate bas reliefs surround Angkor Wat on four sides. Each tells a story. The most celebrated of these is the Churning of the Ocean of Milk, which is located on the east wing. In it the Naga serpent, is twisted by demons and gods to spurt out the elixir of life.