Discover the temples, hill tribes, and night markets of Northern Thailand on this journey to Chiang Mai and Chiang Rai. During your week-long vacation, you’ll delve into Chiang Mai’s culinary scene, visit the Golden Triangle at the borders with Laos and Myanmar, and meet with hill tribe villagers in the countryside. 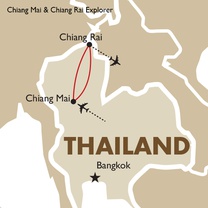 This 7-day Thailand vacation takes you to Chiang Mai and Chiang Rai in the north of the country. It features first-class accommodations, private tours, and is a great add-on to a stay in Bangkok.

Your journey begins in Chiang Mai, the nation’s unofficial northern capital, known for its good food, quiet atmosphere, and wealth of beautiful temples left over from the Lanna Kingdom during the Middle Ages. You’ll tap into the city’s religious history with a half day temples tour, which takes you to many of the most notable temples in the city. Along with your guide, you’ll see Wat Chiang Man, the oldest temple, Wat Phra Sing, known for its intricate woodcarvings at Lak Kham Chapel, Wat Chedi Luang, with its massive pagoda, and Wat Suan Dok, which was a royal garden in the past and now houses one of the city’s famous monk schools. The next day, delve into the city’s culinary scene with a trip to Chang Purk Market, where you’ll have a chance to try some delicious local foods, including noodles, soups, spicy meats, and desserts. Once the sun is down, head to the night market to try your bargaining skills with vendors selling handicrafts and Thai silks.

From Chiang Mai, head northwest to Chiang Rai, one of the hidden gems of Thailand, which is known for its temples and gorgeous architecture. While based in Chiang Rai, you’ll spend a day meeting the hill tribes of the northwest. Start with a visit to Akha and Yao tribes in the mountainside, who trace their heritage back to Tibet and are among the poorest minorities in the country. Continue to Chiang Saen, the crossroads market town on the Mekong River, where you can gaze out over the Golden Triangle that connects Thailand, Laos, and Myanmar. End the day at Mae Sai on the Thai-Myanmar Border, where you can catch a glimpse of life in Myanmar and peruse some flea markets before returning to Chiang Rai. You’ll have another day at leisure in Chiang Rag to tour its temples such as Wat Phra Sing and What Phra That Chedi Luang, or gaze upon the elaborate, bizarre stylings of Wat Rong Kun, the dragon-scaled, whitewashed temple known as the White Temple.

At the end of your stay, head to the airport to connect to your onward destination.

We bring you cool and funky at the very center of town.

Whether you wish to experience Thailand's legendary northern slow life or venture through hip and exciting activities, we have it all.

Discover the blend of big city decor and luxurious nature - this innovative architectural concept features a vertical garen and salt water pool area but feel free to go and explore the old town or the legendary Doi Suthep.

Today you will explore some of Chiang Mai's most notable temples including Wat Chiang Man, the city's oldest temple and famed for a Chedi supported by rows of elephantine buttresses; Wat Phra Sing home to the beautiful Lai Kham chapel with its exquisite woodcarving and northern style murals; Wat Chedi Luang and its enormous Pagoda (which was partially destroyed by an earthquake in 1545); and last, Wat Suan Dok, which dates back to the 14th century when it served as gardens to the Thai Monarchy. Nowadays Wat Suan Dok contains the ashes of the Chiang Mai Royal family and also houses one of the most famous Monk Schools in Chiang Mai. Continue onto to see Chiang Mai's old city walls, moat and gate, and local market.

Pick up from hotel in the evening then drive to Chang Purk Market where you will find delicious traditional Thai market fare. Various vendors will be lined up selling dishes including soups, noodles, pork, seafood and Thai desserts. Sample some of the food items for a light dinner. Then visit the Night Market to browse the array of wares on offer, and try your hand at bargaining for goods. Admire handcrafted wares, Thai silk, or Asian silver jewelry. Return to your hotel later in the evening.

Chiang Rai Province provides a mountain break that enables your clients to enjoy stunning natural beauty and fascinating History, and, staying in the beautiful The Legend Guests will be able to enjoy 7 acres of lush, sub-tropical riverside parkland and a true "back to nature" experience, whilst being located only a leisurely 20 minute stroll from the centre of Chiang Rai.

The Legend is built alongside the River and within nature, rather than replacing nature. With no building taller than a tree, The Legend is home to a myriad of trees and plants and visited by many birds and butterflies.
In spite of our beautiful, natural location, we have arguably the two best restaurants in Chiang Rai.

A visit to the Akha and Yao tribes allow visitors to experience life in the villages of people who are originally from Tibet. Among the poorest Thailand's ethnic minorities, they've preserved influences and traditions from China. We will then go to Chiang Saen, a small crossroads town on the bank of the Mae Khong River to explore some of the ruins of the area and to enjoy a stunning panoramic view of the Golden Triangle. We will finally reach Mae Sa, which is the northernmost town of Thailand and Burma. Visitors will be given some time to explore the many flea markets before driving back to Chiang Rai.