DELUXE | PRIVATE-GUIDED: The perfect introductory China itinerary for the independent traveller includes three of the most important cities, Imperial Beijing, Ancient Xian and the city of the future, Shanghai. 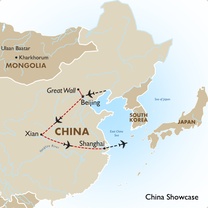 China, known as the Middle Kingdom by the ancient Chinese as the centre of the universe, is the 3rd largest country in the world. It is surrounded by 14 other nations and has 5 different time zones. A visit to China offers the opportunity to view the development and progress of this country with its modern skyscrapers and contemporary designs but at the same time, it is also the world’s oldest continuous civilization and this can be seen everywhere you travel.

You will see in a 360 degree glance, Mao Tse Tung’s Mausoleum, the Great Hall of the People, China’s seat of government, the National Museum of China and the Forbidden City (also known as the ImperialPalace). You will then step into the Forbidden City immediately being transported back to the time of the great Dynasties who ruled here. Next stop will be the Temple of Heaven where China’s Emperors once worshipped. You will marvel at the beauty of this architectural gem. You then head out to the opulent SummerPalace, a complex of pavillions and temples where the Emperors and their families went to escape the summer heat. The Marble Boat moored on the man-made lake here is something that is not only unusual but has a fascinating story involving the Last Empress of China!

Your next day in Beijing includes a visit to the world famous Great Wall of China nestled in the mountains approximately 80 kilomteres/50 miles north of the city.  No one on seeing this phenomenal landmark has ever been disappointed. Once stretching some 6300 kilometres/3900 miles across China, there are only a few remaining parts available for visitors to see how the wall looked some 2000 years ago. This particular section of the wall is well preserved. You can walk along it as far as time allows. Your final stop on the way back to Beijing is at the Ming Tombs where some of China’s past Emperors were buried.

Fly next to the ancient capital of China, Xian, an old walled city which was the ancient capital of China and has over 3000 years of history. This is evident in its many historic monuments and ancient archaeological sites. The most famous is the site of the Terra Cotta Warriors just outside the city with its three tombs of 2000 year old life size army of soldiers, each one different. When you think of the age and size (6000 figures) of this fairly recent archaeological discovery, you are experiencing something very extraordinary.  Nearby is the tomb of the first Emperor of China, Qin Shi Huang.

A visit to the BanpoMuseum will reveal many of the Neolithic treasures found in the area.

Then fly to Shanghai, a city which has been described as futuristic due to the amazing recent developments to its infrastructure and architecture. However, although these developments will be found fascinating, the traditional side of the city still exists in its neighbourhoods. A walk down pedestrian Nanjing Road will show a side of the city which has long been in existence with its small stores including a number of emporiums selling a variety of antiques. The legendary Bund or riverside boardwalk reveals examples of the British and French late 19th Century, early 20th Century architecture for which Shanghai is famous.

Visits to the atmospheric Jade Buddha Temple and the traditional extensive Yu Yuan Gardens will remind you of a bygone era that should never be forgotten.

The Fairmont Beijing Hotel brings unprecedented luxury and hospitality offering guests a distinctive stay right in the heart of China's modern capital business centre. Located in the central business district, the distinctive collection of comfortable and contended guest rooms, top-end spa treatments, gym facilities and award-winning restaurants allow our globe-trotting guests to enjoy opulence from all aspects, while on their journey in China's capital.

Pick up from hotel, walk through the Tian’an Men Square and head to the gate of the Forbidden City, the abiding symbol of imperial China. Truly one of the great achievements of civilization, its construction employed hundreds of thousands of workers between 1406 and 1420. Marvel at its expansive architecture, magnificent imperial gardens, and many museums of Chinese antiquities and treasures. Head to the Summer Palace, which is the best-kept existing royal garden in Beijing, a complex of pavilions, temples, and galleries set among beautifully landscaped grounds, situated on Kunming Lake. After a Chinese lunch at local restaurant, explore the Temple of Heaven, one of the finest creations of the Ming dynasty. This stunning architecture realizes the eternal Chinese desire to incarnate heaven in material form and represents the most advanced principles of mechanics and geometry of the time. Late afternoon, transfer back to hotel.

Today you will visit the magnificent Badaling section of the Great Wall of China, located approximately one and a half hours northwest of Beijing. The Badaling section was built in 1505, along with a military outpost reflecting the location's strategic importance. This section is one of the best preserved and most visited areas of the Great Wall. Enjoy stunning views as you stroll along this seemingly endless piece of history, which winds its way far into the distance. After lunch, visit the Ming Tomb, one of 13 Imperial tombs from the Ming Dynasty, before returning to Beijing.

Pick up from hotel, today begins with a viewing of the extraordinary 2,300 year old terracotta warriors in the tomb of China's first emperor, Qinshihuang. The warriors still stand at the original site where farmers discovered them in 1974. After Chinese lunch at local restaurant, visit the Banpo Museum, as the first museum at the prehistoric site, it was built at the base of the excavations of the Banpo site and opened to the public formally in 1958. The Banpo Site is a typical Neolithic matriarchal community of the Yangshao Culture dating back about 6,000 years. After visit the Art Ceramics Factory, where you will have chance to learn how to make a pottery figure. Late afternoon, transfer back to hotel.

Proud, legendary and lavish, the luxury Fairmont Peace Hotel, overlooking Shanghai's Huangpu River, boasts a history that overshadows that of any other hotel in the Far East. With its origins dating back more than eight decades, this beloved landmark served as a glamorous playground for the elite of Shanghai, where every night was an extravagant gala event and veritable Parisian fashion show. Truly the social heart of Shanghai, the hotel has been the coveted site of the city's most exciting and opulent events: quite simply, the most desirable place to see and be seen. The restored Fairmont Peace Hotel ushers in a new era of elegance and comfort for discerning travellers to Shanghai. No matter what brings you to this landmark hotel on in Shanghai, your every need will be graciously met.