FIRST-CLASS | TAILOR-MADE: Get the best of both worlds on this city and beach getaway. On this Thailand vacation, you’ll explore the cultural highlights of Bangkok before heading to Phuket to soak up the beach atmosphere and enjoy the warm waters of the Andaman. 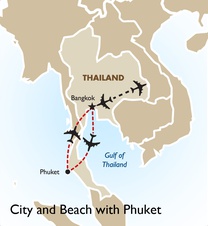 This 9-day Thailand vacation combines the bustle of Bangkok with the charming beachside idylls of Phuket.

Your Thailand vacation begins in Bangkok, the capital of Thailand and the most-visited city on the planet. Upon immediate arrival, you’ll realize that Bangkok is a city of contrasts. Massive skyscrapers sit beside wooden huts. Luxury malls jostle for baht alongside bustling farmers' markets. No one side of Bangkok is all-defining; it takes both to capture what makes this city so invigorating. Make sure to see the landmarks like Wat Pho and the Grand Palace, and ride the Skytrain if you need to get around the city in style. During your Bangkok tour, you’ll also head on an excursion to the Damnoen Sanduak Floating Market, where you’ll see dozens of vendors on boats selling fruits and vegetables. In the evening, you’ll zip through the streets of Bangkok on a tuk tuk, experiencing the city in the most authentic way imaginable. On your night journey, you’ll stop off at the night markets to see local vendors sell food and flowers and have a chance to buy some for yourself.

From Bangkok, continue your Thailand vacation by zipping down to Phuket, the popular beach resort on the Andaman Sea. With its white-sand beaches, lush mountains, and magnificent coves, it’s no wonder that Phuket is one of the world’s most famous beach getaways. Staying in one of the pampering resorts on the island, you’ll have multiple days to enjoy the gorgeous climate and lazy atmosphere. Swim in the warm waters of the Andaman or take a guided walk to spot animals and fascinating plants in the nearby wilderness. Relax with a good book on the beach or engage in some wellness detox at the many health spas in the area. Or take a deep-dive into Thai culture with a cooking class or by learning Thailand’s traditional martial art, Muay Thai.

This Thailand vacation combines the bustle of the big city with the relaxing tempo of the beach. It’s a great way to engage with two essential parts of Thai culture.

Tower Club at lebua is a five-star all-suite hotel with award-winning restaurants and unrivaled dedication to personalized and engaged service, where every moment is memorable and simply exceptional. Occupying floors 51-59 of the State Tower, each of the spacious suites offers breathtaking balcony views of Bangkok and the Chao Phraya River and luxury amenities, complemented by the myriad thoughtful touches that reflect the personalized, intuitive service available throughout the hotel.

Crowning the hotel is The Dome at lebua, a collection of world-renowned award-winning restaurants and bars, where stunning settings, exquisite cuisine and bespoke service elevate the dining experience.

Start the morning with a trip to Wat Pho, arguably Bangkok's most enchanting temple. Arrive just as the resident monks gather for their morning chants. Witness this deeply spiritual ritual and gain a better sense of Thailand's Buddhist heritage. After the chants, take a walk around Wat Pho and see the vast collection of religious treasures on display.

The tour then continues to the nearby Grand Palace, which has served as the seat of Thailand's revered Royal family for more than two centuries. Take a walk around the vast grounds, stopping in to explore the various temples, throne halls and museums within the compound. Visit the Emerald Buddha, the most revered Buddhist image in Thailand, and hear about its mysterious origins.

Take a break for lunch in a riverside restaurant, enjoying delicious Thai food with fabulous views. Then continue onwards to visit Wat Trimitr, on the edge of Chinatown, which houses the world's largest solid gold Buddha.

Afterwards take a long-tail boat and move away from the high rises of the city and venture through the quiet canals upon which the city was originally built. Catch glimpses of the olden days, passing by charming neighbourhoods built on the water's edge. Return to the main waterway, the Chao Phraya River, to visit Wat Arun and admire its incredible decoration with ceramic tiles depicting figures of Chinese soldiers and animals.

After a full day of exploring Bangkok, you'll be returned to your hotel in the late afternoon.

Bangkok by Night with Dinner

Bangkok is a city that truly comes to life after dark. Spend an evening exploring the vibrant streets and tranquil temples with a local guide, getting a different perspective of the capital.

You'll be met in the lobby of your hotel by your guide and will start the evening with a BTS Skytrain or tuk-tuk ride to the central pier. From here, continue onwards by longtail boat sailing up the Chao Phraya River to Wat Arun. See all the buildings and temples lit up and see passing river cruises with lots of lights. Disembark at Wat Arun pier, spending time there before crossing the ferry to a local pier. Walk through the market down to Riva Arun Hotel to enjoy a refreshing cocktail. Enjoy dinner at a great local restaurant on the banks of the Chao Phraya River. With the majestic Wat Arun glittering in the distance, you'll enjoy a delicious traditional Thai meal. Following dinner, take a stroll to the temple grounds of Wat Pho to soak up the beauty of its glittering chedi at night.

Then hop on a tuk-tuk and traverse through the city's historic quarter for a visit to Pak Klong Talad. One of the country's largest fresh markets, the site is busy 24-hours a day with wholesale vendors and local shoppers. Explore the stalls where orchids, flowers, vegetables and other items spill over the crowded stalls.

This unforgettable evening tour ends with a transfer back to your hotel.

The Surin Phuket is an exclusive beach retreat for discerning travellers, families and couples seeking relaxation and indulgence in a serene beachfront setting. The Surin Phuket is located on the tranquil Pansea Beach on the west coast of Phuket Island. The hotel offers a total of 103 hillside and beachfront cottages and suites all discreetly built into a carefully conserved landscape, amidst coconut trees and gently sloping down to meet a small coral reef. The Surin, Phuket offers a contemporary Thai experience in timeless simplicity and modern sophistication.

Escape to a quieter, more natural side of southern Thailand with this day trip from Phuket. Travel by speedboat across the Andaman Sea to the six scenic Phi Phi Islands. The journey to Phi Phi takes around 45 minutes, passing by spectacular limestone karsts that jut out from the blue seas. Sit back and relax, enjoying the views as the boat cruises closer to paradise. Cruise by Maya Bay, arguably one of Thailand's most beautiful places. The bay is stunning and was used as the setting for the famous Hollywood movie 'The Beach'.

Continue around the islands, Phi Phi Lay Cove and Monkey Beach. Each of these stretches of island boasts swaying palm trees and white sands. There are also calm, clear waters brimming with fish for those who wish to discover Thailand's underwater beauty.

During the day, lunch will be served at Tonsai Bay. This southern stretch of Phi Phi Ley Island offers sweeping views of the surrounding sea. The afternoon is spent cruising to Bamboo Island and possibly other islands nearby, for more chances to snorkel and swim in the Andaman Sea.

After a spectacular day cruising the Phi Phi Islands, it is time to return to Phuket. Transfer back by boat and car, arriving at your hotel early this evening.

Cap off a day in the tropics with a memorable dinner cruise in Phuket. You'll be met at your hotel and transferred to the Yacht Haven Marina Pier where you'll board the June Bahtra. Designed to resemble a traditional junk-rigged schooner, the ship is the perfect vessel for a sunset excursion. Cruise onto the waters through Koh Naka Yai and take a short longtail boat to disembark there to enjoy swimming and sunbathing on the white sandy beaches. Continue further to the Phang Nga Bay and reach a scenic spot in time for sunset and watch the sky change colours from blue to vibrant hues of oranges, pinks and reds. With an unobstructed view from the June Bahtra's deck, admire the beauty of the southern seas while enjoying a homemade buffet dinner onboard. Cruise back to the Yacht Haven Marina before being transferred back to your hotel.