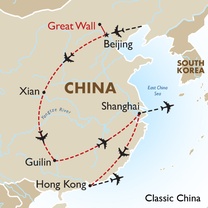 The perfect itinerary for the first time independent traveller to China. In two weeks, get to know this country by visiting some of the most important destinations each with its own wealth of attractions.

The capital, Imperial Beijing, is where one is immediately exposed to the colourful history that China is so proud of. Start in Tian An Men Square, the world’s largest public square after which enter the Imperial Palace complex also known as the Forbidden City and find yourself back in the days of former Dynasties. The Great Wall of China is something once seen, never to be forgotten. After a short walk on the wall, more history is revealed at the Ming Tombs, the burial grounds of former Emperors.

Fly next to the ancient capital of China, Xian, an old walled city. It is also home to the 6000 life size famous Terra Cotta Warriors who are now 2000 years old and a fairly recent archaeological discovery.

Guilin in sub tropical Southern China is one of the country’s most scenic cities with its riverside location. A cruise on the Li River takes you through a landscape which will simply amaze you. Pinnacles of rock tower above the banks of the river as you cruise through rice paddies and lush countryside.

Shanghai is something to behold and has been described as the city of the future with its contemporary infrastructure and architecture. Yet it still retains its old charm which can be seen strolling through neighborhoods.

The last stop is Hong Kong called the city of life as it never appears to sleep. A visit to Stanley Market allows you to do some inexpensive but serious shopping. Victoria Peak will give you a breathtaking panoramic view of Hong Kong’s harbour and Kowloon. There is also time to explore this vibrant metropolis and discover so much more.

Days Inn Forbidden City Beijing is a courtyard-style establishment, surrounded by thousand year old trees. The hotel has retained its old-world charm, but at the same time, merged it with contemporary architecture and designs. The hotel caters to both the business and leisure travellers, focusing on clean and comfortable accommodations while providing high-quality service and amenities at a competitive price.

Pick up from hotel, walk through the Tian’an Men Square and head to the gate of the Forbidden City, the abiding symbol of imperial China. Truly one of the great achievements of civilization, its construction employed hundreds of thousands of workers between 1406 and 1420. Marvel at its expansive architecture, magnificent imperial gardens, and many museums of Chinese antiquities and treasures. Head to the Summer Palace, which is the best-kept existing royal garden in Beijing, a complex of pavilions, temples, and galleries set among beautifully landscaped grounds, situated on Kunming Lake. After a Chinese lunch at local restaurant, explore the Temple of Heaven, one of the finest creations of the Ming dynasty. This stunning architecture realizes the eternal Chinese desire to incarnate heaven in material form and represents the most advanced principles of mechanics and geometry of the time. Late afternoon, transfer back to hotel.

Today you will visit the magnificent Badaling section of the Great Wall of China, located approximately one and a half hours northwest of Beijing. The Badaling section was built in 1505, along with a military outpost reflecting the location's strategic importance. This section is one of the best preserved and most visited areas of the Great Wall. Enjoy stunning views as you stroll along this seemingly endless piece of history, which winds its way far into the distance. After lunch, visit the Ming Tomb, one of 13 Imperial tombs from the Ming Dynasty, before returning to Beijing.

The Grand Mercure On Renmin Square is located inside the Ming Dynasty Wall of the ancient city of Xi'an, surrounded by quiet courtyards and elegant gardens, emanating the unique rich historical breath of the famous "cradle of Chinese civilization". 194 guest rooms and suites in spectacular style reflect 50 years of historical soul of the Renmin Building.

Pick up from hotel, today begins with a viewing of the extraordinary 2,300 year old terracotta warriors in the tomb of China's first emperor, Qinshihuang. The warriors still stand at the original site where farmers discovered them in 1974. After Chinese lunch at local restaurant, visit the Banpo Museum, as the first museum at the prehistoric site, it was built at the base of the excavations of the Banpo site and opened to the public formally in 1958. The Banpo Site is a typical Neolithic matriarchal community of the Yangshao Culture dating back about 6,000 years. After visit the Art Ceramics Factory, where you will have chance to learn how to make a pottery figure. Late afternoon, transfer back to hotel.

The Guilin Bravo Hotel is located in city centre, and surrounded by some of the most popular shopping areas. The Guilin Bravo Hotel is one of the quintessential hotels in Guilin that is ideal for both business and leisure travellers. The city centre and night market are both within a 10 minute walk. There are 480 tastefully decorated guest rooms, lake view rooms and suites.

Pick up from hotel, be driven to pier for Li River Cruise. A double-decker river boat is waiting for you. The landscape from Guilin to Yangshuo is truly a masterpiece of nature. The crystal waters, straight-out-of-a-painting mountains, peaceful farm fields, hard-working-but- ever-smiling fishermen and wandering water buffaloes inspire poetic musings of Guilin's charming life. Under the blue sky, your river boat transports you in an unending daydream. After cruising for about four and a half hours, the one-thousand-year-old Yangshuo Town comes into sight. Yangshuo is a small oriental but Western-influenced town with a history of 1000 years. The West Street in the town earns its name since almost every one in West Street can speak fluent English and every restaurant or bar offers menus in several languages. After that, transfer back to Guilin.

Sunrise On The Bund

Located in the heart of the Kowloon Peninsula, the BP International is close to the lush, calming greens of Kowloon Park as well as the flourishing business district. From the moment you step into BP International, you'll be impressed by its refreshingly modem design. Simple elegance combined with inspired artistry creates a spacious and comfortable environment where discerning guests will feel right at home. Equipped with modem facilities and dedicated staff, BP International will give guests a pleasant and memorable stay. Shopping and leisure opportunities are also found close to the hotel including, the Nathan Road, Park Lane Shopper's Boulevard, Harbour City on Canton Road and China City.

This tour reveals some fascinating Hong Kong heritage and starts with a visit to a charming parkland setting for a Qing Dynasty fort The Kowloon Walled City Park. The Park sits on the very site of the former Kowloon Walled City, remembered today as a haven of crime and debauchery. Throughout the 20th century, fugitives and other criminals flocked to the lawless enclave. In 1987, with the agreement of China, the colonial government finally took control of the no-go area, resettled its inhabitants, and replaced the slum with a park.

You will then visit one of Hong Kong's most popular temples, Wong Tai Sin, which specializes in fortune-telling. The temple's claim to 'make every wish come true upon request' might have something to do with its popularity. Home to three religions (Taoism, Buddhism and Confucianism), its natural setting and beautifully ornamented buildings make it as much a scenic attraction as an important religious center.

Next be amazed by the Tang dynasty-style Buddhist temple, the Chi Lin Nunnery. This Buddhist nunnery is stunning with its monastery complex having been renovated as a piece of Tang dynasty architecture. The grand and elegant complex will surely become one of China's great cultural attractions in the years to come. There are other halls containing a treasure trove of religious relics as well as restful lotus ponds and an array of well-manicured Bonsai trees. Finally, you will visit the Avenue of Star on the Tsim Sha Tsui waterfront; it has more than a hundred newly designed celebrity hand prints to take you on a dazzling 'journey to the stars'. The glamorous movie theme is complemented perfectly by the splendor of Victoria Harbour and the Hong Kong skyline, of which the promenade also offers spectacular views.