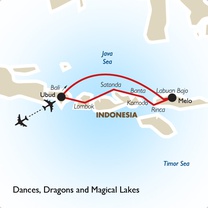 This 8-day cruise through the magical islands of Indonesia invites you to immerse yourself in a wide variety of cultures, and walk in the lands of the world’s last true dragons. It can be taken in either direction.

If you’re departing from Labuan Bajo, you’re right at the doorstep of Komodo National Park. You’ll have the chance to snorkel or swim before spending the night on land, then meeting your sailing ship for your 7-night voyage. Your first stop is the village of Melo, known for its traditional ‘whip fights’ before visiting the famed ‘sea gypsies of Kukusan.

On to Rinca Island, and a ranger-led trek in search of Komodo dragons. Besides the famous reptiles, Rinca’s beautiful landscape is blessed with deer, monkeys, and buffalo, along with over 1000 species of fish. You’ll then have a chance to go snorkelling on Siaba Island. The following day, drop anchor off Komodo Island and go ashore for another dragon trek, Again, the wildlife – including birdlife – is plentiful. In the afternoon, the Makassar Reef impresses with its snorkelling, potentially in the shadow of majestic manta rays.

Play on the white sand beaches of Banta Island and enjoy some superb snorkelling. Here you can climb to the surrounding peaks that are about 300 metres high. We will land on the 18,00 metre high volcano of Sangean, where you’ll also meet the locals and learn about the island’s ambitious boat building project of a traditional pinisi boat. On the island of Satonda, see the coral gardens and sunken crater lake, formed at the site of the largest volcanic eruption in human history. Spend the rest of your day visiting local villages, learning about local folklore and exploring the tranquil pools and waterfalls of Satonda.

A final dinner with the crew under the stars brings your Indonesian adventure to a memorable close before disembarking in Bali, the sole Hindu dominated island in Indonesia. Known as the Island of the Gods, Bali may tempt you to stay longer with its idyllic beaches, abundant cultural activities, and friendly people.

Upon arrival at Komodo Airport, you will be escorted to your hotel where you can relax by the pool, swim in the sea, and have a chance to brush up on your snorkelling skills with your SeaTrek tour leader.

Gather at sunset for evening cocktails before sitting down to an Indonesian buffet dinner as you get acquainted with the rest of your fellow guests who will be joining you on the cruise ahead.

In the morning we will take a short drive to a traditional local village high up in the hills, where we will be witness to the fast and imposing 'caci' whip dance by the local villagers. Here we will enjoy their hospitality with coffee, betel nut and a highly potent local 'arak' before (not for the faint hearted), before being be treated to a selection of traditional dances by their men and women.

By late morning we will be on the boat, and as we enjoy a buffet lunch we will cruise out into the Komodo National Park where we will have our first snorkel amongst the corals.

In the early evening at cocktail hour we will anchor off Kalong Island to see thousands and thousands of fruit bats emerge from their mangrove homes and fill the sky as they head off to the mainland in search of food.

Visit Rinca Island and go on a trek in search of the more Komodo dragons. See monkeys, dear, pigs, buffalo, and myriad birds as we walk through the forests and savannahs of this large island.

Swim with schools of manta rays as they feed on the current and circle the so-called cleaning stations, where small fish remove parasites from their skin. Hover above these giant and noble beasts for as long as you like.

Snorkel at Siaba Island, a favourite hangout of sea turtles, where we will have a chance to swim with these gentle reptiles as the cruise along the shallow water of the reef.

Spend the morning on Gili Banta, a deserted island with a beautiful white sand beach. Explore the magnificent coral gardens, hike to the crest of the surrounding hills for a view of the surrounding islands, swim, paddle, kayak and play.

Cruise across the sea as we get the sails up and set course for Sangean Island, where local villagers are in the process of building a fifty-plus metre, traditional wooden pinisi boat, with the same pedigree and history of SeaTrek's very own ships. Walking around this small village, get a feel for their simple way of life, chat with the locals and maybe buy some handmade textiles as a momento.

Snorkel on a vibrant coral reef just off the shore filled with fish and marine creatures from all shades of the colour spectrum, including a meadow of hundreds of glass eels.

Wake up off Satonda Island, an extinct volcano with a brackish lake at its heart, where we will swim, snorkel, kayak, paddle board and explore the surrounding forest if you wish. The lake was created when it the crater was flooded by a tsunami caused by a massive volcanic event from the nearby Tambora Volcano, which in 1815 was the largest eruption in recorded history.

Set sail for Moyo Island and take a walk through a village to a jungle waterfall and play with local kids as they take the lead on a rope swing above a cool, deep jungle pool to show us how it's done.

Wake up early in Saleh Bay, where we will hopefully swim with a group of whale sharks that congregate off fishing platforms, where local fishermen catch small baitfish and keep them suspended in nets, which attract the sharks.

Spend the afternoon on a nearby beach where we will snorkel, paddle, kayak and explore our jungle surroundings.

Visit a village of the famous Bajao 'Sea Gypsies' of Southeast Asia, and see how they live their lives so close to, on and in the water.

Another relaxing afternoon awaits as we land on a nearby uninhabited island, where once again we will relax and enjoy snorkelling, kayaking and paddle boarding.

Enjoy Indonesian hospitality as your crew host a beach barbeque in your honour this evening. On offer is plenty of good food, music, cocktails dancing and frivolity as we dance and sing the night away next to a bonfire under a clear tropical night sky.

Wake up at anchor off the coast of Bali under in the shadow of Bali's active volcano Mt Agung, the mother mountain of all Balinese people, and the most imposing figure on the whole landscape of Bali. Enjoy an early morning swim or snorkel before we say goodbye to the crew and start our tour back to the south of Bali.

Along the way, experience the best that East Bali can offer with a tour of East Bali with its deep culture and glorious landscapes. Visit water palaces, ancient villages, see lush rice terraces and jungles and the islands volcanic peaks, and dine on some of Bali's freshest and most delicious traditional cuisine.