FIRST-CLASS | PRIVATE-GUIDED: Discover the exciting region of Malaysian Borneo on this journey to towering mountains, remote villages, and modern cities. Explore Kota Kinabalu and the base of Mt. Kinabalu, recharge at a luxury resort on Gaya Island, spot orangutans in Semenggoh, and venture to an Indigenous longhouse near Sri Aman. 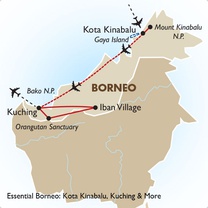 This 11-day Malaysian vacation takes you across the Malaysian part of Borneo to explore mountains, cities, and villages. It features first-class accommodations and private-guided tours.

Discover the Malaysian region of Borneo, a massive island shared between Malaysia, Indonesia, and Brunei. The region is divided into two states: Sabah, and Sarawak. Begin in the capital of Sabah, Kota Kinabalu, a city known for its beautiful sunsets and modern infrastructure. A city tour will showcase some of its cultural landmarks, including Po Toh Tze Buddhist Temple, the Sabah State Museum, and the State Mosque. The rest of your time in the city is at leisure to stroll along the waterfront, get some fresh food at the fish market, and enjoy the attractive atmosphere. From Kota Kinabalu, you’ll connect into Kinabalu National Park, where you’ll trek through a forest of orchids and rhododendrons to explore the base of Mount Kinabalu and the mountain garden.

From Kinabalu, you’ll connect to Gaya Island to spend three nights relaxing on the beautiful resort island. Enjoy the pampering comforts of your island resort and spend your time as you wish. Recharge with a day at the spa, hike the trails along the island, visit the marine centre to head on an excursion onto the water, or kayak through a mangrove forest. After your several days on the resort island, you’ll connect back to the mainland and Kuching, the capital of the state of Sarawak.

A city tour will introduce you to Kuching’s blend of Malay, Chinese, and Indian cultures, best exemplified by the spice streets and temples of the old town. You’ll visit an old Malay Village, see the State Mosque, and enjoy the views of Kuching Waterfront, where you can gaze as Astana, the former “White Rajah Palace.” While based in Kuching, you’ll head into Bako National Park to explore the oldest park in the region. Explore a forest landscape of mangrove trees that’s populated by proboscis monkeys, long-tailed macaques, and monitor lizards.

Return to Kuching and connect onwards to Sri Aman. Along the way, you’ll stop at Semenggoh Nature Reserve to see Borneo’s most beloved inhabitants: orangutans. Learn about the conservation efforts to save these great apes and watch them during scheduled feeding times. Continue along to Sri Aman and stop off at Indigenous markets, rice fields, and pepper plantations before reaching Lachau, a small country Chinese village, where you’ll enjoy lunch. Reach Sri Aman, where you’ll head on a guided stroll through the old town and alongside Fort Alice and the century-old Tze Yin Khor Chinese Temple. While based in Sri Aman, you’ll spend time visiting an Iban longhouse, a traditional communal home of the Iban Indigenous people. Ride a longboat into a remote region to reach the longhouse and enjoy a song and dance performance as well as a traditional lunch served on the riverbank.

Then return to Kuching to spend a final night before departing back home the following day.

You will be met at the airport by a Goway representative and transferred to your hotel. The remainder of the day is at leisure.

This morning enjoy a city tour and introduction to Kota Kinabalu, the capital of Sabah. Visit the Po Toh Tze Buddhist Temple, the Sabah State Museum and the magnificent State Mosque (closed on Fridays). The remainder of the day is free for you to continue exploring Kota Kinabalu on your own. We suggest a walk along the waterfront tonight and a visit to the lively fish market.

Depart for a 2-hour drive to Kinabalu National Park, nominated by UNESCO as a World Heritage site. Enjoy the spectacular mountain scenery as you drive through the Crocker Range to the Park Head Quarters. You shall stop at a fruit and handicraft stall along the way. Kinabalu National Park is home to Mt. Kinabalu, the highest mountain in Malaysia which towers majestically at 4095 m (13431 feet). It is a botanist paradise - home to over a thousand varieties of wild orchids, rhododendrons, insect eating plants and much more, many of which are endemic to the park.
At the park, join a trail walk in the mountain rainforest to get a first-hand impression of the park and its flora before visiting the Mountain Garden with its collection of orchids and plants that are unique to Kinabalu. Enjoy lunch at the park's restaurant and return to Kota Kinabalu in the afternoon.

After breakfast, check-out and transfer to the jetty in Kota Kinabalu to take a scheduled shared boat ride to nearby Gaya Island (approx. 20-minute transfer). The rest of day is free at leisure to relax at your resort. There are a variety of optional activities offered by your resort (not included). Choose to visit the Gaya Island Marine Centre, take a nature trail walk, go kayaking in the mangrove forest, schedule a spa appointment or simply relax by the sea.

Enjoy a full day at leisure to enjoy the facilities at your resort.

Enjoy a full day at leisure to enjoy the facilities at your resort.

Return to Kota Kinabalu by boat and then transfer to the airport for your regional flight to Kuching. Meet, greet on arrival in Kuching and transfer to your hotel.
In the late afternoon, depart for a Kuching city tour. Kuching has been a melting pot of cultures for hundreds of years. Combined with a unique history, which sounds almost like an adventure fairy tale with its rebellions and piracy, the headhunting tribes and the era of the "White Rajahs", Kuching has become a truly special place. See all the different facets of the many cultures combined in Kuching, like Malay, Indian and Chinese culture, and learn about the history of Sarawak on this city tour. Highlights include the Gambier spice streets, India street, Urang Sarawak Gallery, the oldest Chinese temple in Sarawak, the photo gallery at Kuching South City Hall (closed weekends), as well as the Brooke Gallery at Fort Margherita. You will also get to see a Malay Village, the old State Mosque and the Civic Centre with the Chinese graveyard. Not to be missed of course is a stop at the Kuching Waterfront with a view of the Astana, the former "White Rajah Palace", and other colonial buildings.

Take a full day excursion to Bako National Park, the oldest national park in Sarawak. The park is located at the northern tip of the Muara Tebas peninsula, accessible by a short 30-minute drive and then a 20-minute boat ride. Bako's mangrove forest is home to the odd-nosed proboscis monkey, found only in Borneo. Other wildlife species found here are the long-tailed macaques, silver leaf monkeys, monitor lizards and bearded pigs. There are a number of hiking trails you can take to explore this fascinating park with your guide. Return to Kuching in the afternoon.

After breakfast, check-out of your hotel and transfer to Semenggoh Nature Reserve (approx. 30-minute drive). The entire facility occupies an area of 740 acres and acts as a sanctuary for orang utans that have been rescued from captivity and young orphaned primates. These animals are trained or re-trained to survive in their natural habitat. They learn how to forage for natural food and build nests in the trees. Many have been returned into the surrounding area of the nature reserve. But there are few that will never re-learn their natural skills due to long association with and dependence on humans. There are daily scheduled feeding times. However, sightings of these primates during feeding times are not guaranteed due to the fact that they are roaming freely within the nature reserve.
From here, depart to Sri Aman (approx. 3.5-hour drive). Along the way, visit the native market in Serian, pass by rice fields and visit a pepper plantation (if time is not permitting, this will be done on the return from Sri Aman). The last stop before arriving in Sri Aman will be Lachau, a small country Chinese village, where you will stop for lunch. Upon arrival at Sri Aman, check into your hotel. In the afternoon take a guided stroll of Sri Aman town. Visit Fort Alice (closed on Mondays) and the century old Tze Yin Khor Chinese temple. Dinner included at a local restaurant.

Early morning breakfast at your hotel and then depart to visit an Iban longhouse, the traditional communal home of the Iban indigenous people who only reside in the state of Sarawak. The drive is approx. 1-hour to Lemanak River jetty from where you will board a native longboat for a 45-minute ride to the longhouse. Upon arrival at the longhouse, meet the native people and their families. The Ibans will sound their gongs and perform their traditional war dance in full ceremonial regalia. One is often invited to join in... don't be shy... it can be fun... even if you don't understand their language. Make sure you try tasting their own rice wine "tuak". A traditional Iban lunch will be served either by the riverbank (if weather permits) or in the longhouse before you say goodbye and then take the journey back to Kuching (approx. 5-hour drive).

Breakfast at the hotel. Free at leisure until check out and transfer to the airport for your departure flight.

* It is also possible to overnight at the Iban longhouse for 1 night instead of at the hotel in Sri Aman. Please ask your Goway expert for more information.