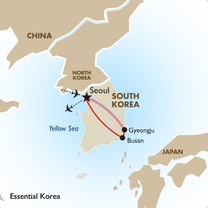 Korea is often referred to as the "Land of the Morning Calm”. This independent itinerary is perfect for those who are looking to experience true Korean culture as Korea has 5,000 years of unique cultural history.

Seoul , the capital of South Korea, is a city of contrasts where the new and the old co-exist in perfect harmony. Ancient palaces combine with modern cultural facilities and popular shopping districts. Seoul offers shoppers a wide variety of merchandise at large department stores, duty-free shops and at open air markets and arcades.

During your stay, visit Gyeongbokgung Palace which was rebuilt in 1868. Situated in its grounds is the largest museum in the country, the National Museum of Korea as well as the Korea NationalFolklore Museum. Also visit "Bukchon Hanok Village. This Village is home to hundreds of traditional houses, called hanok, that date back to the Joseon dynasty. Bukchon, which was the central residence of nobles and bureaucrats during the Joseon Dynasty, is a place called a city street museum because of its many historic sites, cultural assets, and folklore materials.. Then it is time for shopping at the open-air South Gate Market and the shopping street, Insa-dong, famous for its antique stores.

Leave for Gyeongju by morning train. For 1000 years until the 10th century, Gyeongju was the capital of the Silla Dynasty. Now, almost 1000 years later, Gyeongju is an open-air museum with the remains of temples, tombs, shrines, palaces, gardens and castles. Start your sightseeing in the centre of town with RoyalTumuliPark, a huge walled area with 20 royal tombs. Nearby is Cheomseongdae, one of the oldest observatories in Eastern Asia. There will be time to go to the Gyeongju National Museum with its collection of mainly Silla relics and Anapji Pond, an artificial lake surrounded by buildings which were part of the palace complex of ancient Silla.

The next morning, see the finest example of Silla temple architecture, Bulguksa, a magnificent temple built on a series of stone terraces just outside Gyeongju. High above the temple, a seated Buddha gazes over Gyeongju from the Seokguram Grotto, also visited. This is followed by the Arts and Crafts Centre and the Silla Millenium Park, a theme park focusing on the Silla period.

Next stop is Busan reached by road, South Korea's largest port and second largest metropolis. En route there, stop at Korea’s largest temple, the impressive Tongdosa Temple. During your stay in Busan, take in the view from the BusanTower in Yongdusan Park and go to the Jagalchi Fish Market. Also visit Nampodong shopping street, one of the favourite haunts of the locals.

The following morning, visit Haeundae Beach, the Nurimaru APEC House, an imposing and beautiful meeting centre located on an island, the Busan Aquarium and the UN Memorial Cemetery located in a serene park which honours soldiers from 16 countries killed during the Korean War. Then one more stop at the unique YongungsaSeasideTemple.

The next day is farewell to this interesting part of Korea as you head back to Seoul by express train.

Upon arrival at Incheon International Airport, you will be welcomed by your local driver, please look out for your name on their welcome board. Transfer to your hotel for an overnight stay. Remainder of the day is at your leisure.

This morning, you'll be met by your guide in the lobby of your hotel to begin your full-day exploration of South Korea's vibrant capital city. Begin with a visit to Gyeongbokbung Palace, where you'll witness the Palace Royal Guard changing ceremony and the palace. Built-in 1395, Gyeongbokgung Palace was the first and largest of the royal palaces built during the Joseon Dynasty (1392-1910). Next visit to "Bukchon Hanok Village." This Village is home to hundreds of traditional houses, called hanok, that date back to the Joseon dynasty. Bukchon, which was the central residence of nobles and bureaucrats during the Joseon Dynasty, is a place called a city street museum because of its many historic sites, cultural assets, and folklore materials.

After enjoying lunch at a local restaurant, visit "National Museum of Korean Contemporary History" to see the history of South Korea from the late 19th century to the present. Tour will continue on to visit Insadong Arts and Crafts Street. Insadong Street is one of the most popular areas in Seoul and represents the focal point of Korean traditional culture and crafts. Stores in Insadong specialize in a wide variety of goods that can only be purchased or appreciated in Korea: hanbok (traditional clothing), hanji (traditional paper), traditional teas, pottery, and folk crafts. Today's tour will end at "Gwangjang Market". This historic market opened in the early 20th century and is home to a number of clothing and food stalls, offering tourists a taste of traditional Korean cuisine. Starting with 'Mayak gimbap', one of Koreans' all-time favorite snacks, and Nokdu-jeon (Mung Bean Pancake), visitors can sample a range of Korean delicacies. Other traditional treats such as Tteok-bokki (Stir-fried Rice Cake) and eomuk (Fish Cake) are also available.

Following your tour, you'll be transferred back to your hotel for the remainder of the day and evening at your leisure.

Seoul to Andong to Gyeongju

This morning, you'll be met by your tour guide in the lobby of your hotel and transferred to Cheongryangri Station where you'll have your first experience on South Korea's KTX high-speed trains as you travel 2hours to Andong. Upon arrival at Andong Station, you'll transfer to a local restaurant for lunch.

After lunch, you will visit a historical "Hahoe village" where Korean beauty and tradition come alive.

Afterwards, you will start the tour of Hahoe Village. Hahoe is a representative single-clan village where the members of Ryu family which originated from Hahoe Village have lived together for 600 years from the Joseon Dynasty (1392-1910).

This village, where tiled and thatched-roofed houses have been preserved well for quite some time, has been registered as a UNESCO World Heritage Site because it retains many cultural heritages that show traditional Korean living culture and ancient architectural styles. Before starting the Hahoe Village tour, first, go up to "Buyongdae Cliff" where you can have a panoramic view of Hahoe Village. "Buyong" is a Chinese character meaning lotus, and it is derived from the fact that the shape of Hahoe Village is like a lotus floating on water. Buyongdae is the best place to see the entire view of "Hahoe Village".

Next, visit "Byoengsan Seowon" (Neo-Confucian Academy) which is said to be the highlight of Seowon architecture for its beautiful harmony of nature and architecture. Seowon is a private educational institution established by local Neo-Confucian Literati from the mid-16th century to the mid-17th century during the Joseon Dynasty.

Following your tour, you'll be transferred to Gyeongju and check-into your hotel.

This morning, you'll be met by your guide in the lobby of your hotel to begin another full day of exploration in Gyeongju. Start with a visit to Seokguram Grotto located on Tohamsan Mountain. It is the main stone temple of Korea. The official name of Seokguram, National Treasure No. 24, is Seokguram Seokgul. Designated as a World Cultural Heritage Site by UNESCO in 1995, it is an artificial stone temple made of granite. Continue on to visit the iconic Bulguksa Temple, the representative relic of Buddhist culture from the Silla Kingdom in Gyeongju which used to be the capital of Silla Kingdom (BC57-AD935). Along with Seokguram Grotto nearby, Bulguksa Temple was designated as a UNESCO World Cultural Heritage site in 1995.

Afterwards, visit the National Museum of Gyeongju. This is a fantastic place to uncover the cultural history of Gyeongju with earthenware, art &amp; craft works, and many galleries exhibiting everyday household goods dating back to life in the Royal Court during the Silla kingdom. Next, visit Cheomseongdae, the oldest existing astronomical observatory in Asia. Afterwards, continue on to the Daereungwon Tomb Complex where large ancient tombs of kings and nobles of the Silla Kingdom can be explored.

Conclude your tour with a visit to Anapji Pond, designed as a park for royalty. Following your tour, you'll be transferred back to your hotel for the remainder of the day and evening at your leisure.

This morning, you'll be met by your guide and transferred by road to Busan (approximately 1 hour). On the way, you'll visit Tongdosa Temple which is a head temple of the Jogye Order of Korean Buddhism. Tongdosa is famous as there are no statues aside from Buddha at the temple because the "real shrines of the Buddha" (relics) are preserved here. Afterwards, visit Haedong Yonggungsa Seaside Temple. This superb attraction offers visitors the rare chance to see a temple along the shoreline as almost all temples in Korea are located in the mountains. Haedong Yonggungsa Temple was first built in 1376 by the great Buddhist teacher known as Naong during the Goryeo dynasty. Continue on to Dongbaekseom Island (Island of Camellias) which is an island located off one end of Busan's famous Haeundae Beach. You'll also have time to visit APEC House Nurimaru and Haeundae Beach before being transferred to your hotel to check-in. Enjoy the remainder of your day and evening at leisure.

This morning, you'll be met by your guide in the lobby of your hotel to begin another full day of exploration in Busan. Your tour includes a visit to the UN Memorial Cemetery where South Korea honors UN soldiers from 16 countries and UN aids from five countries that were killed in battle during the Korean War from 1950-1953. Next, visit Youngdusan Park (Busan Tower) in downtown Busan which is one of Busan's three famous mountains. Continue to Gukje Market, which has a history of over 70years, is a representative traditional market in Busan. Following the Korean War, refugees who fled to Busan set up stalls in order to make a living by selling smuggled or imported products, which developed into Gukje Market (gukje meaning "international" in Korean) of today.

Then visit one more market called Jagalchi Fish Market located on the shoreside road in Busan's Jung-gu, which is Korea's largest seafood market, selling both live and dried fish. After the Korean War, the market solidified itself as a fish market.

Today's tour ends with a visit to Songdo Yonggung Suspension Bridge. This suspension bridge is 127m long, 2m wide, and made of wire mesh, people can see the blue ocean under their feet and feel the thrill of walking on the sea and at the same time enjoy the refreshing view of the sea.

Following your tour, you'll be transferred back to your hotel for the remainder of the day and evening at your leisure.

Enjoy time at leisure until you check out and are met and transferred to Busan station for your KTX high-speed trains as you travel 2 hours and 30 minutes to Seoul.

Upon arrival at Seoul station, you'll be met by your local driver who will be holding a signboard with your name on it. From here, you'll be transferred to Incheon International Airport for your onward flight.