FIRST-CLASS | PRIVATE-GUIDED: Explore the vivid flavours of China on this journey throughout the country’s most notable culinary capitals. Taking you from Beijing to Xian, Chengdu, and Shanghai, this tour includes several private foodie tours, first-class accommodations, and a chance to experience the mouth-watering flavours of the Middle Kingdom. 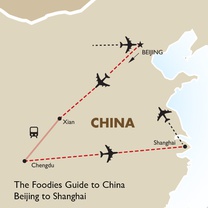 This 10-day Chinese vacation showcases the flavours of Chinese cuisine in Beijing, Xian, Chengdu, and Shanghai. It includes first-class accommodations, private tours, and is perfect for luxury travellers wanting to explore Chinese cuisine and the great cities of China’s north.

Your trip to China begins in Beijing, the Chinese capital and gateway to the Great Wall. On your first full day in Beijing, explore the landmarks of Tiananmen Square and the Forbidden City, the resplendent former palace of the Chinese Emperor, before heading through the historical neighbourhood of Hutong on a private pedicab tour. That afternoon, join a private cooking class to visit a local market and learn to cook some Northern Chinese specialties. The next day, head north to connect to the Mutianyu section of the Great Wall. Stroll along the guard towers built during the Ming Dynasty and enjoy breathtaking views along this rugged section of the wall. On your final morning in Beijing, tour the Temple of Heaven and take a foodie tour of Beijing’s popular snacks before flying to Xian.

Xian is the former imperial capital and the home of the Terracotta Warriors. It was also a key city on the Silk Road that connected Europe and Asia. As such, it’s a city with a blend of cultures and some delicious culinary specialties. Start with a foodie tour through the Muslim Quarter, where you’ll try some of the most delectable Chinese cuisine in the world. In the afternoon, visit the massive Xian City Wall before heading to the tomb of China’s first emperor, Qin Shi Huang, where you’ll see the Terracotta Warriors. These ancient statues have protected the emperor’s tomb for over two millennia and are among China’s greatest treasures.

Continue your Chinese vacation to Chengdu, the Sichuan capital and home to the Giant Panda Breeding Center. On your first day in Chengdu, you’ll attend a Sichuan Cuisine Museum Cooking Class to learn about the history of Sichuan cuisine and its famous spiciness, and cook some of the food for yourself. The next day, visit the Chengdu Giant Panda Breeding Centre to observe giant pandas in their natural habitat and learn about Chinese conservation efforts for these beloved mammals. Later in the day, explore the People’s Park and the ancient streets and courtyards of Kuan Zhai Xiang Zi before enjoying a hot pot dinner.

Close out your trip in Shanghai, China’s largest city and financial hub. Defined by the glittering skyscrapers of the Pudong district, including Shanghai Tower and the Oriental Pearl TV Tower, Shanghai is China’s city of the future. However, it’s also filled with landmarks of the past. Get a taste for the city’s historical side with a stroll down the Bund, where you’ll see Art Deco buildings and enjoy postcard views of the skyline across the river. Then dig into the city’s culinary culture with a foodie tour all about Xiaolongbao, delicious soup dumplings. That evening, attend the Shanghai Acrobatic Show to marvel at feats of athletic prowess from Chinese acrobats.

On the final day of your trip, head to the Shanghai Urban Planning Museum to learn about the construction of new Shanghai before attending a private cooking class to learn to make dim sum, and climbing Shanghai Tower for some final views of the spectacular skyline. After a farewell dinner at a Michelin-starred restaurant on your final night, you’ll head to the airport the following morning for your flight back home.

Upon arrival in Beijing, transfer to your hotel for check in. Remainder of the day is free at leisure.

This morning walk through the Tian'an Men Square and head to the gate of the Forbidden City, the abiding symbol of imperial China. Truly one of the great achievements of civilization, its construction employed hundreds of thousands of workers between 1406 and 1420. Marvel at its expansive architecture, magnificent imperial gardens, and many museums of Chinese antiquities and treasures.

After a Beijing flavor lunch at a local restaurant, you have an afternoon Hutong Tour, where well-preserved courtyard homes and narrow hutong alleys border tree-lined lakes, tour the district by "pedicab" for a closer and more engaging experience of traditional Chinese life.

Then enjoy a Private Cooking Class including a visit to the local colorful market with your chef, and be introduced to some of the wonderful fresh produce and spices that make cuisine so delicious. Enjoy a cooking demonstration featuring some Chinese favourite regional specialties. Help with the preparation of these dishes and then enjoy them for dinner.

Today starts with a morning excursion to the Great Wall of Mutianyu with cable car access, this is a rugged section of the Wall that offers less crowded access and a more striking perspective as the Wall climbs and winds over the surrounding hills. Here the Great Wall of China presents a visual experience that consistently exceeds visitors' expectations. Scholars estimate that the Wall, averaging 25 feet in height and nearly as thick, once stretched for 3,700 miles, passing through sixteen provinces. Have a country lunch at a local famer's restaurant at foot of the Wall

Drive back to downtown and enjoy a Peking Duck Dinner.

This morning visit the Temple of Heaven, one of the finest creations of the Ming dynasty, where can see the locals doing morning exercises, such as Tai chi, Shuttlecock Kicking, etc. This stunning architecture realizes the eternal Chinese desire to incarnate heaven in material form and represents the most advanced principles of mechanics and geometry of the time. Afterwards, enjoy a Foodie Tour to try the various Beijing local snacks.

In the afternoon transfer to the airport for flight to Xian.
On arrival in Xian, transfer to your hotel for check-in. Have a Xian Flavor Dinner at a local restaurant.

You have a morning Xian Foodie Tour through the Muslim Quarter where you can find traditional Chinese Islamic cuisine, shops, and merchants.

Visit the ancient City Wall with a bike or buggy ride on the Wall, and then continue to a viewing of the extraordinary 2,300-year- old terracotta warriors in the tomb of China's first emperor, Qinshihuang. The warriors still stand at the original site where farmers discovered them in 1974.

This morning take the high-speed train to Chengdu. On arrival in Chengdu, transfer to your hotel for check-in.

Have a Chengdu local snack lunch followed by a visit to Sichuan Cuisine Museum Cooking Class at the Museum. At the Museum, you will not only realize the history of Sichuan Cuisine, but also have chance to watch the whole procedure of cooking and practice cooking Sichuan food. Dinner is your own creation!

This morning visit the Chengdu Giant Panda Breeding Centre, which is beautifully landscaped with lush plants and lakes. Meet with 20 some pandas and their caregivers. The highlight is to see the panda cubs at the kindergarten where they play with each other, climbing up and down trees, rolling and pushing and kicking like Kungfu masters. Also, visit the Small Red Panda Center with 40 small pandas in residence who roam freely.

After a Sichuan Flavor Lunch at a local restaurant, visit People's Park with its Bonsai Garden, the park also where throngs of locals gather to practice Taiji, fly kites, or do synchronized dance. Then head to Kuan Zhai Xiang Zi, the major buildings in this site are courtyards and ancient style streets, wander the surrounding area, immersing in traditional shops and local activities.

Lunch is on your own. Stroll along the famous Bund/Waterfront and to visit the 400 year's old Yu Garden. Yu in Chinese means pleasing and satisfying, and this garden was specially built for Pan's parents as a place for them to enjoy a tranquil and happy time in their old age. Outside the garden, is the famous Chen Huang Miao - an area of shops, restaurants and recreation facilities. A Shanghai Foodie Tour for local snacks including the famous "Xiaolongbao" (soup dumplings)

Start the morning by visiting the Shanghai Urban Planning Exhibition Center. The focus of the exhibit is a large-scale model of the entirety of urban Shanghai, showing existing buildings and approved future buildings. Other exhibits relate to Shanghai's history and planned development, including smaller scaled models focusing on particular areas of interest such as the Bund.

Tonight you have a farewell Shanghai Flavor Dinner at a Michelin-starred restaurant.

Departure transfer for your onward flight.