FIRST-CLASS | PRIVATE-GUIDED: A scenic delight, this tour visits Darjeeling and Gangtok both offering gorgeous views of the Himalayan mountain peaks as well as tea plantations, forests, and old Buddhist monasteries. 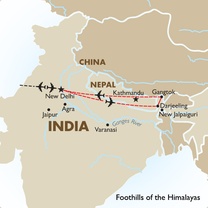 Darjeeling , located in West Bengal, which is internationally acclaimed as one of the best hill stations in the world at 2050 metres/6700 feet, is covered with pine trees and orchids as well as tea plantations and surrounded by magnificent mountain scenery.

Tucked away in the foothills of the Himalayas, Sikkim is a Himalayan wonderland with its lovely views, exotic orchids and its forest-trails. It is a virtual Shangri La overlooked by Mt. Kanchenjunga, the world's third highest peak. Buddhism is the predominant religion here, with many fine old monasteries rich with frescoes and religious paintings In Gangtok, the delightfully quaint capital, are pagoda like roofs of many buildings and the presence of crimson robed monks in the bazaars.

Start off with arrival from Delhi at Bagdogra airport and travel by road to Darjeeling. The next morning brings a full day of sightseeing in Darjeeling including the Himalayan Zoo with its good collection of animals, the Himalayan Mountaineering Institute created by Sherpa Tensing of Everest fame, the Museum of Everest Expedition, the Tibetan Self Help Centre for Tibetan refugees, the Emporium of Tibetan Handicrafts and after lunch, the Ghoom Monastery with its 15 feet high statue of Buddha.

The next day drive north to Gangtok, once the capital of the independent state of Sikkim, now part of India situated at 1800 metres/5800 feet. The afternoon is at leisure. The next morning, visit the Enchey Monastery built in the 1840’s, the Deer Park, The Government Institute of Cottage industries and the Research Institute of Tibetology established in 1958 involving research into Buddhism and Tibetan culture. After lunch, travel outside Gangtok to the Rumtek Monastery established in the 16th Century with the world’s largest collection of Buddhist books and manuscripts and the largest monastery in Sikkim with its community of monks.

Travel back by road to Bagdogra airport the next morning for the return flight to Delhi.

This morning you will board your flight to Bagdogra, a small town in the Darjeeling which is surrounded by lush tea gardens. The area in which Bagdogra is situated is commonly called the Dooars at the foothills of the eastern Himalayas. Rich in natural beauty it has abundant exotic flora and fauna. There are several tea gardens and fruit orchards too in the region. The Teesta is the main river flowing through here, and is the base of whitewater rafting and angling.

Upon arrival you will be met and escorted to Darjeeling The queen of the Hills! Welcome to Darjeeling nestling amidst towering snow-capped mountains, dominated by the mighty Kanchenjunga - King of the Mountains. Said Mark Twain of Darjeeling: "The one land that all men desire to see, and having seen once by even a glimpse would not give that glimpse for the shows of the rest of the world combined."

Situated at an altitude of 2,135 m this town was laid out by Lord Napier of the Royal Engineers. This picturesque town has numerous tea gardens and a lush green landscape of fir and pine trees, along with over 4,000 different types of flowering plants and more than 300 types of ferns including the rare tree fern. Bounded by Sikkim on the north, Bhutan on the East and Nepal on the West, Darjeeling is set amidst its snowy sentinels. Invisible to the eye at dawn the snowy peaks gently turn pink, mauve and as the sun slowly rises over the horizon the vista bursts out into a fiery orange.

The pedestrian town centre is dominated by Chowrasta Mall, where you can stroll around and mingle with large Nepali and Tibetan populations mixed with Victorian colonial mansions. Darjeeling has several British-style public schools, which attract students from many parts of India and neighboring countries. Nearby Tiger Hill offers a breathtaking view of the Himalayas which are particularly spectacular at sunrise.

Arrive and proceed to your hotel where the rest of the day is at leisure.

This morning you will visit the Padmaja Naidu Himalayan Zoological Park, which was built to preserve, study and conserve Himalayan fauna this zoo was established in 1958. Amongst the many animals that are housed in this Zoo are the rare Siberian Tigers, Red Panda and the Tibetan wolf. Other animals like the Himalayan black bear, Panther, Snow Leopards and Pandas and Deer can be seen roaming in their natural habitat.

Continue onto the Himalayan Mountaineering Institute. When the invincible virgin peak of Mt. Everest was conquered by Sir Edmund Hilary and his Sherpa guide Tenzing Norgay on 29th May 1953. The Queen bestowed a knighthood on Edmund Hillary, whilst in India the grateful nation built the gallant Sherpa, an institute where he could impart his skill to other enthusiasts who climb mountains. The foundation stone of this institute in Birch Hill Park and it is open to climbers from all over the world. The institute also displays a rich collection of Himalayan flora and fauna.

The institute has a mountaineering museum containing mountaineering gear and the specimens of Himalayan flora and fauna. The Everest Museum at Darjeeling HMI exhibits the history of attempts on the great peak. The museum also exhibits equipment used by Tenzing Norgay (who lived in Darjeeling) and Edmund Hillary on their way to Mt. Everest and a letter written by George Mallory, the British climber who was lost while climbing Mt. Everest and whose body was found just a few years back. Promoting mountaineering both as a science as well as a sport the institute museum displays the equipment used in the victorious attempt.

You will also visit the Tibetan Refugee Centre, which was established in 1959 to rehabilitate displaced Tibetans who had followed his holiness the Dalai Lama to India that year. The center has a home for the old, an orphanage, school, hospital and craft workshops which produce carpets of pure Ladakhi wool, intriguing Tibetan handicrafts, woodcarving, leather work and wool items. Here you can watch the people weaving, dyeing and carving wood.

This afternoon you will visit the Ghoom Gompa or Monastery, which is also known as Yogachoeling Gompa, this is probably the most famous monastery in Darjeeling and is about 8 km south of Darjeeling and enshrines an image of the Maitreya Buddha. Foreigners are allowed to enter the shrine and take photographs. As Ghoom is frequently shrouded with mist, making the monastery is cold and dark, it is also known as the Gloom monastery.

This morning you depart Darjeeling and enjoy a scenic drive through semi tropical forests, cardamom plantations and small villages to Gangtok, the capital and largest town of Sikkim. It is located in the Eastern Himalyan range at an altitude of 5,800 ft. Here you will find an interesting mix of cultures and various ethnicities such as Indian-Nepalis, Lepchas and Bhutia. MG Marg, the main street of Gangtok town is the main hub and is the country's first litter and spit free zone with no vehicular traffic is allowed into the area.

Arrive and proceed to your hotel where the rest of the day is at leisure.

This morning you will visit Enchey Monastery, meaning solitary temple, it was built in 1909 and is a 200 year old monastery. The monastery is built on the spot, which is believed to be blessed by Lama Druptab Karpo, a tantrik master who was known for his flying powers. The monastery is also an important seat of the Nyingma sect of Tibetan Buddhism.

According to a legend, it is believed that Lama Druptab Karpo constructed a small hut on this site, where he landed after his return from Maenam Hill. However, the present structure of the monastery was constructed in the shape of Chinese Pagoda during the reign of Sikyong Tulku (1909-1910).

On the top of the monastery is a shining golden cupola. The walls of the monastery and the prayer hall have paintings and murals of four religious kings. In addition, paintings of idols of the four cardinal directions along with the galaxy of Mahayan Buddhist can also be seen on the walls. The monastery also houses 90 monks along with a large collection of masks, which are used during the annual ritual rites.

You will also visit the Deer Park, which was established in the 1950’s and is home to different species of deer and red pandas. The park enshrines an icon of the Buddha and provides an excellent view of the green hills and valleys. Continue onto visit the most prestigious Namgyal research Institute of its kind in the World, Institute. Founded by ruler of Sikkim of that time, the 11th Chogyal Tashi Namgyal in 1958 and it is a treasure of vast collection of rare Lepcha, Tibetan and Sanskrit manuscripts, statues and rare Thankas (Colorful tapestries used in Buddhist liturgy). Apart from an attractive museum, it has over 200 Buddhist icons and other artifacts. As far as its collections are concerned, it is only one in India, other two are in Institute of Peoples of Asia in Moscow and Toyo Bunko, in Tokyo.

Return to your hotel.

This morning you will return to Bagdogra where you will connect with your flight onto Delhi.