DELUXE | PRIVATE-GUIDED: Head to the southwestern coastline of Sri Lanka for a combo city and beach getaway. Start in Galle, where you’ll see The Fort and its other historical landmarks. Then head to a deluxe beachside hotel to soak up the sun and enjoy the warm waters and sandy beaches along the Indian Ocean. 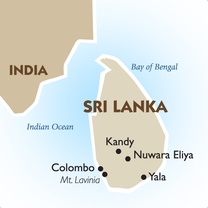 This 6-day Sri Lankan vacation takes you to Galle to explore its history before soaking up the beaches on the southwestern coastline. If features deluxe accommodations, independent touring, and is perfect for people who want to explore a bit of history while enjoying a beach escape.

Your trip to Sri Lanka connects you to the capital, Colombo, before heading south along the coastline to Galle, an old Dutch trading port that has become one of Sri Lanka’s historical highlights. Staying in a deluxe hotel with a great view of the city, you’ll have a full day to explore some of Galle’s many landmarks, from The Fort, a colonial fortress built by the Portuguese in the 16th century, the 18th-century Dutch Reformed Church, and the Galle Lighthouse. After exploring Galle, head up the coastline to a 5-star hotel where you’ll have a full day on the beach. Take a surfing lesson, snorkel through the coral reef to spot turtles and tropical fish, or simply lie back on the sand and enjoy the views of the Indian Ocean.

At the end of your stay, connect back to Colombo to continue to your onward destination.

With foundations dating back over three centuries, the property was originally a Dutch mansion and warehouse, and as such the 18th century doors and windows on the building's facade are perhaps the best examples of their kind within the Fort. Rescued from neglect and decay, and lovingly and painstakingly restored in 2003; the property retains its historical value and authenticity while also boasting some modern creature comforts. In 2007 UNESCO awarded the hotel the Asia Pacific Heritage Award of Distinction, calling it 'a masterpiece of cultural heritage and conservation'.

The Taj Bentota Resort &amp; Spa is a discerning traveler's sandy gem. This quieter, more stunning luxury beach resort offers uninterrupted beach views from the majority of rooms, the ineffable scent of ocean mist, and the humbling, rhythmic sound of the waves caressing the shore.

Please note that Goway is able to assist with alternate beach locations such as Weligma Beach, Hikkaduwa Beach, Mirissa Beach and more. If interestest, please inquire with your Goway destination specialist.