FIRST-CLASS | PRIVATE-GUIDED: Experience the Golden Triangle as a tantalizing introduction to India. Walk the streets of bustling Delhi, visit the breathtaking Taj Mahal in Agra and end your trip in colourful Jaipur with its sprawling markets and stunning Amber Fort. 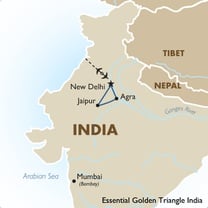 Perfect for the first time traveler to India, this tour takes you along India’s Golden Triangle, linking three of the most important cities in the northern states of Haryana, Uttar Pradesh and Rajasthan.

Begin in India’s second largest city, Delhi, a massive metropolis full of historic ruins and looming skyscrapers built side by side. The city is divided into two distinct cities, Old Delhi, with its wealth of historical architecture, and New Delhi, the nation’s modern capital. Walk through the winding streets of Old Delhi and enter the imposing Purana Qila or Old Fort, standing on the banks of Lake Delhi. Pay your respects to the liberator of modern India by visiting Raj Ghat, the cremation site of Mahatma Gandhi. Also be sure to visit the Jama Masjid Mosque, one of India’s greatest mosques. In New Delhi, pass through the India Gate and visit the Presidential Palace. Be sure to try some of Delhi’s distinct Mughlai cuisine before you move on to your next destination.

In Agra, visit the iconic Taj Mahal. The Taj Mahal was built as a grand demonstration of Shah Jahan’s love for his deceased wife, Arjumand Banu Begum or Mumtaz Mahal. It remains the planet’s most impressive mausoleum. No matter your expectations, the Taj Mahal will exceed them. However, Agra boasts more than the Taj Mahal. The Agra Fort is a historian’s dream, recounting the region’s fascinating history of empire, war, and reconstruction.

Walk the ghost city of Fatehpur Sikri, which lies between Agra and Jaipur. Built in the late sixteenth century in fulfillment of a prophecy, the city was promptly abandoned shortly after construction due to the area’s scant water reserves. What remains is one of the finest examples of Mughal architecture left in the world.

Explore the former capital of Amer just outside the walls of Jaipur. Amer is famous for its Amber Fort, a red sandstone and marble fortress first built in the tenth century. The fort’s imposing exterior gives way to a lavishly designed interior. Inside Jaipur’s city limits, stop for a photo op at the famous Hawa Mahal or Palace of Winds and the City Palace. And remember, no trip to Jaipur would be complete without a rickshaw ride through the local bazaars.

This brief but fulfilling tour of India will build lasting memories and instill a deep-seated desire to return to this vibrant nation in the years to come.

On arrival, you will be met and escorted to your hotel. The remainder of the day is at leisure. Delhi is the showcase of India and has been the centre of political activity for decades. The ancient fortress, majestic buildings and historic ruins find their modern counterparts in the tall skyscrapers, diplomatic enclaves and well-planned townships of New Delhi.

In the morning, visit the bustling, busy area of winding back streets and colourful ambience of Old Delhi. Afterwards, visit The Red Fort, Jama Masjid and Raj Ghat, the cremation site of Mahatma Gandhi. In the afternoon, visit New Delhi with a drive down the main avenue and see the impressive India Gate, the Qutub Minar, the Presidential Palace and the 16th Century tomb of Humayun.

Depart by road for Agra. On arrival, check into your hotel. In the afternoon, visit the unconquered Agra Fort followed by a tour of magnificent Taj Mahal - surely the most extravagant expression of love ever created. The balance of the day is at leisure.

In the morning, you will continue the tour and depart for Jaipur. En-route explore Fatehpur Sikri, the deserted red sandstone city built by Emperor Akbar as his capital in the late 16th Century. Upon arrival in Jaipur, check into your hotel and the remainder of the day is at leisure.

Today begins with a visit to the Amber Fort which sits on top of a rugged hilltop and overlooks Lake Moata. The Fort is unique in that it's outside, an imposing and rugged defensive structure, is markedly different from its inside, an ornate, lavish interior influenced by both Hindu and Muslim styles of ornamentation. Return to the base of the fort by jeep. This afternoon explore the city including a photo stop at Hawa Mahal (the Palace of Winds) as well as visit to the City Palace, museum and the Jantar Mantar Observatory. Later, board a cycle rickshaw to explore Jaipur's famous local markets.

Following a leisurely breakfast you will be transferred back to Delhi or Delhi International airport to board your flight back home or onward destination.

Daily (order of sightseeing will be arranged to accommodate Taj Mahal and Red Fort closure days).