FIRST-CLASS | PRIVATE-GUIDED: Wide boulevards, a legacy from the French, interesting architecture, historic sights and Ho Chi Minh’s home and mausoleum all add up to provide a well worth visit to Vietnam’s capital. 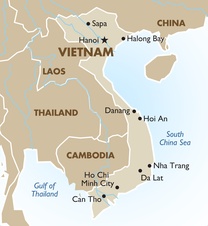 Hanoi is Vietnam’s capital and second largest city in the north of the country. It offers a unique blend of the east and the west. The western flavour is due to the influence from the lengthy French occupation. This influence is also apparent in the city’s wide, attractive boulevards.

Start your Hanoi experience with a visit to Ho Chi Minh’s mausoleum where his embalmed body lies in state.  Also visit the nearby museum to learn more about the man.

See the Governor’s Residence restored and built with a French architectural influence.  In the afternoon, visit the charming and lovely One Pillar Pagoda, originally constructed in the 11th Century and made of wood to resemble a lotus blossom, the Buddhist symbol of purity, the Temple of Literature also dating back to the 11th Century and the uniquely designed Opera House.  Visit the picturesque Hoan Kiem Lake in the centre of the city also named The Lake of the Sword. Finally, take a stroll through the ancient quarter called the 36 Streets all traditionally named after artisans and craftsmen.

InterContinental Hanoi Westlake offers contemporary style in a luxurious setting on the waterfront. It overlooks the 800 year old Golden Lotus Pagoda on Hanoi's largest lake, Ho Tay Lake. The historic city centre is within a 10-minute ride, as are a wide range of shopping and cultural venues. The hotel is just 40 minutes by taxi from Noi Bai International Airport. There are 359 spacious guestrooms and suites that are gracefully appointed and come with all the contemporary amenities.

Visit Ba Dinh Square where silent sentries guard the marble mausoleum in which Ho Chi Minh lies in state. Subject to opening hours, the interior of the mausoleum may be visited. Continue to the modest stilted wooden bungalow where Uncle Ho lived and worked, before visiting Ho Chi Minh Museum. Dedicated to the 'father of the country', the museum chronicles the evolution of Vietnamese independence.

French architecture features prominently in Hanoi and the nearby former Governor's Residence is a fine example. Continue to the One Pillar Pagoda, a Buddhist pagoda with a history steeped in folklore. The final stop is the Thang Long Royal Citadel, a UNESCO World Heritage Site built in the 11th century during the Ly Viet Dynasty. This important historical site served as the capital of Vietnam for eight centuries.

Enjoy lunch at a local restaurant before continuing your exploration of the city, resplendent with French colonial architecture including the exquisite, Opera House. Pass Hoan Kiem Lake, also known as the 'Lake of the Restored Sword' after the legend that surrounds it, en-route to one of the city's many fascinating museums: choose from History Museum, Military Museum, Hoa Loa Prison or Fine Arts, depending on your personal interests. Continue to the Temple of Literature, a serene retreat from the busy streets outside. Built in 1070 and dedicated to Confucius, it became Vietnam's first university.

The best way to experience Hanoi's Old Quarter is on foot and next, take a walking tour through an area of the city known as '36 Streets'. The oldest continuously developed area of Vietnam, this densely populated section of Hanoi was once an important centre of commerce where goods were sold on the street name of a particular guild. The labyrinthine alleyways are perfect for exploring on foot with names such as Sugar Street, Tin Street and Paper Street.