FIRST-CLASS | PRIVATE-GUIDED: Situated between India and Tibet, is the Kingdom of Nepal; the country of Mount Everest and the Shangri-la of the East. The rich cultural and artistic heritage of Nepal is synthesized in Kathmandu, the capital city which lies in a circular valley. Here you can visit its durbar square, the famous Swayambhunath "monkey temple" and nearby Bhadgaon, the "city of devotees." 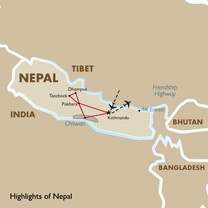 Also see Chitwan, Nepal's first national park, where you can enjoy an elephant safari, canoe ride and jungle trek. Visit the scenic and peaceful town of Pokhara, the gateway for trekking expeditions with stunning panoramic views of the Himalayan ranges. Embark on a comfortable trek in the foothills of the Annapurna's. See local villages, stunning subtropical forests and incredible mountain views.

You will be met and transferred from the airport to your hotel. Situated between India and Tibet, the Kingdom of Nepal is the country of Mount Everest, known as the Shangri La of the East. Kathmandu is the capital and largest city of Nepal and is rich with temples. Its festivals exceed the number of days in a year. The valley has seven sites that have been enlisted in cultural World Heritage Site list. The city uniquely blends culture with the modern world - it is the administrative capital of the country but yet is a treasure cove of history. This evening you have the option to explore Thamel, a colourful mixture of craft shops, boutique cafes, trekking gear, and rainbow prayer flags. Its clean narrow streets are full of mushrooming lodges and budget hotels. At night, Thamel is a twinkling mass of coloured lights, paper lanterns and neon restaurant signs.

Today starts with a visit to Swayambhunath (also known as the "Monkey Temple"). Swayambhunath is a 2000 year old world famous Buddhist Stupa and UNESCO World Heritage Site. Its lofty white dome and glittering golden spire are visible for many miles from all sides of the valley. Painted on the four-sided base of the spire are the all-seeing eyes of Lord Buddha. Above each pair of eyes is the 'third eye' signifying the wisdom of looking within. Continue on to Kathmandu Durbar Square (an UNESCO World Heritage Site). Durbar Square (or "meeting place") is the centre of old Kathmandu, a gathering of temples and shrines with intricate carvings. You willl see the temple of Kasthamandap, believed to have been made from the timber of a single tree, the three storied Akash Bhairav (God of the sky) Temple, and Hanuman Dhoka, the old royal palace named after the monkey god. From the entrance gate of the Hanuman Dhoka you can enter the Nasal Chowk courtyard. Continue on to the Temple of the Living Goddess, or Kumari House where you may catch a glimpse of the "Kumari" at one of the open windows overlooking the inner courtyard. Kumari is a tradition in Nepal of worshiping young girls as manifestations of the divine female energy (or "Devi") in Hindu religious traditions.

After lunch (included) drive to Patan, one of the oldest Buddhist cities in the world, also known as Lalitpur, or the city of fine arts. Patan is one of three royal cities in the valley and is filled with wood and stone carvings, metal statues, ornate architecture, including dozens of Buddhist and Hindu temples, and over 1200 monuments. Your tour ends with a visit to the Tibetan Handicraft Centre. Established in 1960 with the aid of the Red Cross and the Swiss Development Corporation, the aim of Tibetan Handicraft Centre is to help provide Tibetan refugees with job opportunities. Here you can observe how traditional carpets, and handicrafts like prayer wheels are made and sold in souvenir shops.

This morning explore Bhadgaon, the "city of devotees". Found in the 9th century, is the home of medieval art and architecture. Here you can visit the Durbar Square, with its array of temples, and the Palace of 55 Windows. This Palace is the best example of the Pagoda style of architecture and stands on five terraces, on each of which stands a pair of figures - two strong men, two elephants, two lions, two griffins and two goddesses. Continue on to the UNESCO World Heritage Site: the Pashupatinath Temple. This is one of the most significant Hindu Temples of Lord Shiva in the world. The richly ornamented pagoda houses the sacred linga, or phallic symbols, of Lord Shiva. It stands as a symbol of unity bringing together the different sects of Hinduism under a single fold. It is situated on the bank of the sacred Bagmati River. Please note: Non-Hindus are not permitted to enter, but can view the temple from a special vantage point. Devotees can be seen taking ritual dips in the holy Bagmati River, a sacred place of cremation and where thousands of pilgrims from all over the world come to pay their respects. Before returning to the hotel, visit Boudhnath, one of the largest stupas of it's kind in the world. It stands with four pairs of eyes in the four cardinal directions, keeping watch for righteous behavior and human prosperity. It is built on an octagonal base inset with prayer wheels.

Early this morning, drive to Chitwan (approximately 6 hours). Chitwan is Nepal's first national park, established in 1962 by the late King Mahendra, as a rhinoceros preserve. Prior to this, Chitwan was the venue for many a grand hunt to which the royalty of Europe, India and the top brass of the British Raj were invited. The Royal Chitwan National Park has been praised as being one of the most visually spectacular and animal rich wildlife sanctuaries in Asia. Arrive and proceed to your resort where the rest of the day is at leisure.

After breakfast at the hotel, embark on a morning Elephant Safari. This afternoon go on a canoe ride to Crocodile (Ghadiyal) breeding centre and go for a walk through the jungle. This evening you can enjoy a Tharu cultural dance.

This morning, drive to the scenic town of Pokhara (approximately 5 hrs). Pokhara is a remarkable place of natural beauty with stunning panoramic views of the Himalayan peaks. Situated at an altitude of 900m, the town is known as a center of adventure as the base point for many treks. The serenity of lakes creates a peaceful ambience. Arrive and proceed to your resort where the rest of the day is at leisure.

The day is at leisure to relax, shop and enjoy the town. You can go for a walk or the more daring can embark on one of the adventure activities available

You will be picked up from your hotel in Pokhara and transferred to the trekking starting point, Naya Pool (about a 1 hour drive). You will have a briefing with guides and porters before you begin your walk along a ridgeline in the lower foothills of the Annapurnas. Enjoy the surrounding views of the Pokhara Valley. This route then drops to the Modi River Valley, where Ker and Downey's Sanctuary Lodge is located. Later today explore the local village of Tanchok. There will be a talk at a local house, now made into a museum. The contents of the house illustrate how the local people live, together with the tools and implements of day to day traditional village life. There will also be a visit to the local school.

This morning start out trekking through the unspoiled village of Patlekhet. Your walk takes you through subtropical forests that include tree orchids, rhododendrons and magnolias. Along the way, stop at the village of Pothana where many Tibetan traders live and sell their souvenirs. After about 3.5 hours, arrive at the Basanta Lodge. From the lodge, you will enjoy sweeping views of the entire Annapurna Range. Enjoy an optional walk through the old village of Dhampus.

Dhampus to Pokhara to Kathmandu

After breakfast, trek along the ridge and descend through the wooded hillside and terraced farmland to the valley floor. (Trekking time 1.5 hours.) Arrive into Phedi and drive back to Pokhara. Board your flight from Pokhara back to Kathmandu (included). Arrive into Kathmandu early afternoon where you will be transferred to your hotel. Remainder of the day is at your leisure.

Today you will be met and transferred from your hotel to the airport.