FIRST-CLASS | TAILOR-MADE: Discover the magic of Istanbul and the Maldives on this convenient vacation. Start in the Turkish capital to explore a city that straddles two continents. Then jet to the Maldives for a week at a luxury resort relaxing on white-sand beaches and snorkelling through crystal-clear waters. 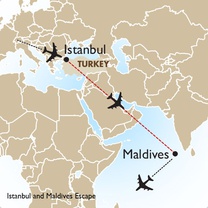 This 12-day Asian vacation takes you Istanbul before jetting to the Maldives for a beach vacation. It features first-class accommodations and private tours.

Your journey begins in Istanbul, the capital of Turkey and the only national centre that straddles two continents. Known as Constantinople during antiquity, the city has long been one of the world’s greatest centres of arts and culture. You’ll get a taste for its magnificent cultural life during your three-night stay. A classic tour will take you to many highlights from throughout the ages, starting at Hippodrome Square, where chariots used to race during Byzantine times, continuing to the cultural and religious monuments of the Blue Mosque, Hagia Sophia, and Topkapi Palace, and closing out at the open-air markets of the Grand Bazaar. You’ll have another day at leisure in Istanbul to cruise the Bosphorus, which separates Asia from Europe, visit some of its museums, and feast on its delectable Turkish cuisine.

From Istanbul, fly to the Maldives to spend seven nights at Kuredu Island Resort & Spa. This 4-star resort located on Lhaviyani Atoll boasts gorgeous thatched bungalows and villas on its 3km stretch of white-sand beaches and turquoise lagoons. You’ll have six days at leisure at the resort to take advantage of the beautiful environment and well-appointed amenities. Book an excursion out to some of the excellent dive sites to explore coral reefs teeming with sea turtles and barracudas. Enjoy a romantic veli dinner on a private stretch of beach or book a luxury cruise aboard a sailboat at sunset. Go fishing for big-water catch or swim alongside the turtles that live off the resort reef. Tee up for a round of golf or unwind with wellness treatments at the Duniye Spa. Throughout it all, you’ll have access to the many on-site restaurants and pristine white-sand beaches of the resort.

At the end of your stay, you’ll connect back to the airport to return home.

Istanbul was once the imperial city of Constantinople which was, for almost a thousand years, the last outpost of the Roman Empire. Conquered by the Ottoman Empire in 1453, the city became the military centre for many campaigns that helped the empire to expand.

By the middle of the 16th century, the population of Istanbul had grown to nearly half a million developing into a major cultural, political and commercial centre remaining under Ottoman control until the First World War. Despite Ankara being named the capital of the newly formed Republic of Turkey in 1923, Istanbul continued to grow becoming an incredibly popular tourist destination.

With its long history, many ancient monuments date back to the Roman, Byzantine and Ottoman periods and as such, the historic areas of Istanbul became a UNESCO World Heritage Site in 1985. Such monuments include Hagia Sophia, a former Orthodox patriarchal basilica which has been turned into a museum and the Topkapi Palace which houses important holy relics from the Muslim world. While rich in history, Istanbul also offers an exciting nightlife and is very fashionable and progressive making the city a true blend of ancient and modern.

On arrival, you will be transfer to your hotel.

Istanbul to the Maldives

Following breakfast, transfer to the Istanbul Airpport for the flight to the Maldives (flight not included in price).

The Maldives is one of the world’s most beautiful island destinations, dotting the Indian Ocean like a natural string of pearls.

On arrival at you will be met and transfered to your resort.

The Maldives is home to some of the best beaches in the world, and those tempting sands are located on almost every one of the country’s islands. They can seem so consistently perfect, with whiter-than-white powder sand and the bright turquoise sea, creating a contrast found almost nowhere else on earth. In area, the Maldives consists of 99% sea and 1% land. So naturally, the sea provides most of the best natural attractions. The country is made up of 26 natural atolls with channels that are used for navigation. All the islands are surrounded by a lagoon with crystal-clear waters. These islands are protected by coral reefs, sustaining a spectacular array of underwater life.

For divers, there are around 70 incredible dive sites to experience in the Maldives. The southern atolls are renowned for coral and lots of channels for spotting sharks and barracudas. The northern atolls have interesting reefs in shallower waters. The sea here is home to 1100 species of fish, five species of sea turtles, and 21 species of whales and dolphins. There are a number of wrecks dotted around where ships have floundered. Snorkeling is open to everyone who can swim.

Following breakfast, transfer to the Male airport for your onward flight.