MODERATE | RAIL: Take advantage of a 7-day Japan Rail Pass to explore the highlights of the Japanese island of Honshu. Experience futuristic Tokyo and visit the famous shrines of Nikko before connecting to Kyoto, Hiroshima, and Nara to visit historic temples, medieval castles, and landmarks from World War II. 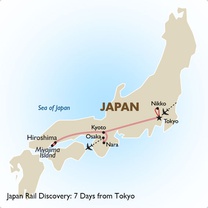 Your Japanese rail journey begins in Tokyo, the nation’s capital and largest city. There are futuristic cities and then there is Tokyo, a mind-blowing showcase of state-of-the-art technology, world-class transit, and looming skyscrapers all next to ancient temples and remnants of the imperial past. Spend two nights exploring the city, seeing grand temples like Senso-ji or the Meiji Shrine, or experience a taste of futuristic Japan at Shibuya Crossing, Shinjuku, or Akihabara “Electric Town,” where manga, video games, and pop culture reign supreme. Spend a day in Nikko to the north, a city of shrines and temples that culminates in Toshogu, which is dedicated to the founder of the Tokugawa shogunate and the most lavish shrine in the entire nation.

Ride the rails to Kyoto, the former imperial capital and Japan’s loveliest city. Spend the rest of the day after arrival seeing a few of its many temples and imperial sights, from Nijo Castle and the Kyoto Imperial Palace to the golden pavilion of Kinkaku-ji and the thousand vermillion torii gates of Fushimi Inari Shrine, which climbs a mountain in the city’s east. Take a day to connect southwest to Hiroshima, the city forever in the shadow of the atom bomb. Visit the Atom Bomb Domb and the Peace Memorial Park, dedicated to the memories of the victims of the atom bomb that detonated over the city in 1945 to close World War II. Then ride the ferry to Itsukushima, the small island to the city’s south that is more popular known as Miyajima, where you’ll see the nation’s most famous red torii gate, which is partially submerged by the tide each day.

On your final full day in Japan, head to nearby Nara, the nation’s first permanent capital and a historical gem of UNESCO World Heritage Sites within a very walkable city core. See the statue of the Giant Buddha at Todai-ji before strolling through Nara Park to befriend the partially-domesticated deer that have lived there for over a millennium.

At the end of your stay, connect to the airport in Osaka for onward travels.

On arrival at the airport, please make your way to the Japan Rail Pass counter to activate your rail pass. Once you have your pass, you can use it to travel by train from Narita or Haneda airport to your chosen hotel.

Japan has one of the most extensive, comfortable and modern rail systems in the world. The Japan Rail Pass offers foreign visitors the opportunity to travel on the extraordinary network of the JR Group at an economical price. The JR Pass allows travel on most JR trains, including Shinkansen bullet trains, limited express, express, rapid and local trains, as well as some local JR buses and the ferry to Miyajima island (near Hiroshima).

Today is free for you to explore Tokyo. With such a great rail system and easy access to taxis it is a very easy city to navigate. We can prearrange a guided tour if you prefer, just chat with our Asia experts to add it to your program.

Nikko is a town at the entrance to Nikko National Park and only 2 hours and 40 minutes from Tokyo. It is most famous for Toshogu, Japan's most lavishly decorated shrine and the mausoleum of Tokugawa Ieyasu, the founder of the Tokugawa shogunate.

Nikko had been a center of Shinto and Buddhist mountain worship for many centuries before Toshogu was built in the 1600s, and Nikko National Park continues to offer scenic, mountainous landscapes, lakes, waterfalls, hot springs, wild monkeys and hiking trails.

Nikko and the Okunikko area around Lake Chuzenji, in particular, are well known for their beautiful autumn colors (koyo). Return to Tokyo for your overnight.

Leave Tokyo today for Kyoto which is an approx. 2 hour and 30 minute bullet train journey. Kyoto served as Japan's capital and the emperor's residence from 794 until 1868. It is one of the country's ten largest cities with a population of 1.5 million people and a modern face.

Over the centuries, Kyoto was destroyed by many wars and fires, but due to its exceptional historic value, the city was dropped from the list of target cities for the atomic bomb and escaped destruction during World War II. Countless temples, shrines and other historically priceless structures survive in the city today.

In the early morning, travel from Kyoto to Hiroshima by bullet train which is an approx. 2 hour train journey. When the first atomic bomb was dropped over Hiroshima on August 6, 1945, the city became known worldwide for this unenviable distinction. The destructive power of the bomb was tremendous and obliterated nearly everything within a two kilometer radius.

After the war, great efforts were taken to rebuild the city. Predictions that the city would be uninhabitable proved false. Destroyed monuments of Hiroshima's historical heritage, like Hiroshima Castle and Shukkeien Garden, were reconstructed. In the center of the city a large park was built and given a name that would reflect the aspirations of the re-born city: Peace Memorial Park. We suggest you visit the Peace Park before continuing on.

Depending on the time you have left in the day, it is suggested you visit Miyajima this afternoon. It is most famous for its giant torii gate, which at high tide seems to float on the water. The sight is ranked as one of Japan's three best views. While officially named Itsukushima, the island is more commonly referred to as Miyajima, Japanese for "shrine island". This is because the island is so closely related to its key shrine, Itsukushima Shrine, in the public's mind. Like the torii gate, the shrine's main buildings are built over water. There are also wild deer on the island that have become accustomed to people. In the day the deer wander around the same sites as the tourists, and in the evening they sleep along the walking paths.

Return to Kyoto for overnight.

Today is free for you to explore Kyoto and possibly even take the train to nearby Nara. We can prearrange a guided tour if you prefer, just chat with our Asia experts to add it to your program.

Today, leave Kyoto and make your own way by train to either Kansai or Itami airport in Osaka for your onward flight. If you would like to extend any part of your stay, please inquire with our team.

Our Asia Experts can assist with adding any excursions you wish to this itinerary. Click here for a sample of some of the day trips on offer.  Don't worry, if what you are looking for is not listed, we are able to assist with any request.

Please chat with our Asia Experts about upgrading your rail pass to the green pass which allows for some extra benefits. Green cars offer larger seats, more foot space and enhanced board service, and they tend to be less crowded than ordinary cars. They are available on most shinkansen and limited express trains and on a small number of local trains. Many travelers find the size and foot room of ordinary seats sufficient, but those who wish to have additional luxury, should go for the green car.

The pass is valid on almost all trains operated on the nationwide network of JR (Japan Railways), including shinkansen, limited express, express, rapid and local trains. Below is a map showing the major train lines that can be used with the pass. 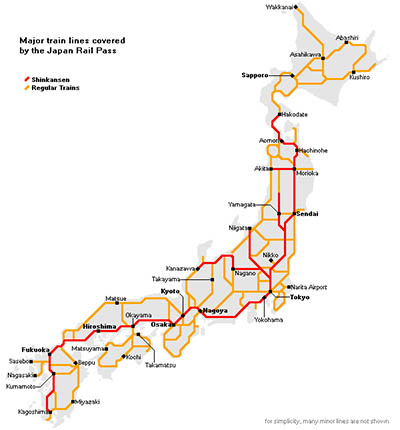