FIRST-CLASS | PRIVATE-GUIDED: Experience the colourful capital of Nepal famous for its traditional Buddhist temples and architecture. Shop for Nepalese handicrafts made by local artisans and wander around interesting markets. 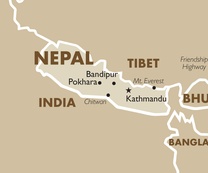 Kathmandu will make you feel like you have stepped back in time. Divided into three areas in the KathmanduValley, Kathmandu itself has as its centerpiece, Durbar Square with its medieval atmosphere, the former residence of the Nepali royal family with the RoyalPalace in the heart of the square surrounded by many interesting temples.

Sightseeing in Kathmandu is to Swayambunath in the nearby Kathmandu Valley., It is the most sacred Buddhist site in the country and an important pilgrimage centre with a mixture of shrines and temples plus an interesting museum. Nearby Patan, across the river, has a rich cultural heritage and a wealth of Buddhist and Hindu temples where one can view wonderful carvings. It is also the perfect place to purchase local arts and handicrafts especially at the Tibetan Handicraft Centre.

Hotel Himalaya is distinguished by its 180 degree panoramic view of the majestic Himalayas from where it draws its name, an intimate sense of luxury and an address near the business district. The hotel is strategically situated at the gateway to the ancient city of Patan nestled against the backdrop of the commercial hub of the Capital. Hotel Himalaya is the leading 4 star deluxe hotel in Nepal offering a resort atmosphere ideal for both business and leisure travellers just a stone throw away from the Patan Durbar Square the ancient palace of the Malla Kings and a world Heritage Site. The hotel offers 125 well-appointed spacious modern rooms available in executive and deluxe categories.

Half Day City Tour Including Swayambhunath and Museum

Your half day city tour begins at Kathmandu Durbar Square (an UNESCO World Heritage Site) which is located in the heart of the old city. There are around 50 temples in the vicinity. Durbar Square (or "meeting place") is the centre of old Kathmandu, a gathering of temples and shrines with intricate carvings. You willl see the temple of Kasthamandap, believed to have been made from the timber of a single tree, the three storied Akash Bhairav (God of the sky) Temple, and Hanuman Dhoka, the old royal palace named after the monkey god. From the entrance gate of the Hanuman Dhoka you can enter the Nasal Chowk courtyard. Although the courtyard was constructed in the Malla period (between the 12th-18th Centuries), many of the buildings around the square are later Rana constructions (the Rana dynasty ruled the Kingdom from 1846 until 1951). During that time Nasal Chowk was used for coronations, a practice that continues to this day. Continue on to the Temple of the Living Goddess, or Kumari House where you may catch a glimpse of the "Kumari" at one of the open windows overlooking the inner courtyard. Kumari is a tradition in Nepal of worshiping young girls as manifestations of the divine female energy (or "Devi") in Hindu religious traditions. Afterwards, drive to Swayambhunath (also known as the "Monkey Temple" due to the numerous holy monkeys living by the temple). Swayambhunath is a 2000 year old world famous Buddhist Stupa and UNESCO World Heritage Site. Its lofty white dome and glittering golden spire are visible for many miles from all sides of the valley. Painted on the four-sided base of the spire are the all-seeing eyes of Lord Buddha. Above each pair of eyes is the 'third eye' signifying the wisdom of looking within. Swayambhunath occupies a central position; it is probably the most sacred among Buddhist Pilgrimage sites.

Half Day Tour Of Patan And A Handicraft Center

Drive out to explore Patan, one of the oldest Buddhist cities in the world, it is also known as Lalitpur, or the city of fine arts. Located on the southern side of the Bagmati River, Patan is one of three royal cities in the valley. Here you will visit Patan's "Durbar Square" and a UNESCO World Heritage Sites including the Royal Palace and museum and here' you will see a golden window where the king would make public appearances. Marvel at the temple of Taleju, in the palace complex. The large Taleju Bell , hanging between two stout pillars, was erected by King Vishnu Malla in 1736. An earlier bell, erected in 1703, was then moved to the Rato Machhendranath Temple. Petitioners could ring the bell to alert the king of their grievances.
After you enter Durbar Square, the third temple you reach is the Krishna Mandir, which was built by King Siddhinarsingh Malla. With its strong Mughal influences, this stone temple is clearly of Indian design, unlike the nearby brick-and-timber, multi-roofed Newari temples. You will also see the statue of Yogendra Malla, the Sati Temple, and the Golden Temple (Hiranya Varna Mahavihar), built in the 12th Century by King Bhaskar Verma. This three-roof Buddhist monastery is adorned with a golden facade, four large gateways, a clock tower, and two lion sculptures. Inside are golden images of Buddha, wall carvings, and a prayer wheel.
Patan is filled with wood and stone carvings, metal statues, ornate architecture, including dozens of Buddhist and Hindu temples, and over 1200 monuments.
Your tour ends with a visit to the Tibetan Handicraft Center on the outskirts of Patan. It was established in 1960 with the aid of the Red Cross and the Swiss Development Corporation to help Tibetan refugees by providing them with job opportunities. Here you can observe how traditional carpets, and handicrafts like prayer wheels are made and sold in souvenir shops. This centre also aims to restore and promote the age-old art of carpet weaving and designs.

Prices are "from" per person based on twin/double share accommodation and for travel in low season. Seasonal surcharges and blackout dates may apply. Limited seats, subject to availability. Rates for single or triple travellers are available on request - please inquire.