Discover the history and flavours of colourful Korea on this tour, combining all the highlights with the country's lesser known stars. 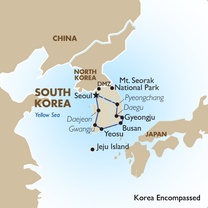 A fascinating culture dating back over 4000 years, Korea is an essential piece of the East Asian mosaic. This 9 day round trip from Seoul lets you experience this unique and beautiful country.

Set out for Gongju, capital of the ancient Baekje Kingdom and home to 1500 year old Gongsan Fortress. Here, visit Yeonguensa Temple, where you’ll partake in a traditional tea ceremony. You’ll also visit the Tomb of King Muryeong, who ruled the Baekje during the early 6th century.

Enjoy an authentic taste of Korea in Jeonju, where you can visit the Hanok Village and try on a traditional costume. See the temple complex of Tapsa and its intriguing Stone Pagodas. Go on to Boseong, famous for its green tea plantations. Then explore the wetlands of Suncheon Bay Ecological Park.

Busan is an excellent city for shopping, containing the world’s largest department store. Just outside it, see Jinjuseong Fortress, which played a pivotal role during the Japanese invasion of 1592. Gyeongju is one of Korea’s most historically significant cities, having served as the capital of the Silla Kingdom for almost a thousand years. Afterwards, visit the Bulgaksa Temple, which includes seven of South Korea’s ‘national treasures’.

Declaring itself Korea’s spiritual capital, Andong has much to offer the visitor, including Hahoe Village, designed to preserve traditional architectural styles. Try can even try your hand at making Hanji, traditional Korean paper.

Experience the organized chaos of Gangreung fish markets, before taking a short hike at Jujeongol, admiring spectacular scenery. Depart from Seoul, or take an extra few days to explore the South Korean capital.

Welcome to Seoul, where the new and the ancient co-exist in perfect harmony for everyone to enjoy. On arrival you will be met by a local driver, then transferred to your hotel by private vehicle.

Remainder of the day is at leisure.

Meet your tour guide at the hotel. Depart for Gongju, the ancient capital of Baekje Kingdom (18BC-660AD). Experience meditation and conversation over tea with a monk at Magoksa Temple, a representative temple surrounded by mountains and rivers in Chungnam Province. Next, visit Tomb of Muryeong King and continue to Gongsanseong Fortress, a mountain castle which was established during the Baekje Period. You will enjoy an archery experience there.

Transfer to Daejeon, the hub city of Korea which is famous for its hot springs. After hotel check-in, the rest of the day is at leisure.

You will explore Gyeonggijeon Shrine which was erected in 1410 and contains the portrait of King Tae-jo, the founder of the Joseon Dynasty. Afterward you will have Jeonju Bibimbab lunch and taste Makkolli (Korean traditional Wine) at a local restaurant.

Then, visit Tapsa Temple in Jinan, famous for the over 80 stone pagodas built by Lee Gapyong, a retired scholar. Then travel to Gwangju located in the southwest corner of Korea.

This morning, visit Boseong Green Tea Plantation, a beautiful green tea field. You will have the chance to taste Boseong Green Tea. Next, visit Suncheon Naganeupseong Folk Village and then explore Suncheonman Bay. Stop by Yongsan Observatory to see the bay's beautiful view. Finally, move to Yeosu, one of the country's most picturesque port cities especially at night.

Today, take Yeosu Marine Cable Car offering the safe yet thrilling experience with the gondola to operate over seawater. Enjoy the scenery of downtown Yeosu and the archipelago around the old seaport. Next, visit Jinjuseong Fortress which is historically linked to the Japanese invasion in 1592. Afterward, transfer to Busan and enjoy the rest of the day on own after dinner.

Rest of the day is free for you to explore Haeundae Beach known for its modern feel. You may spend fantastic night time at cafes and pubs. Also you can enjoy watching busking along the shoreline as well as Haeundae Market.

This morning, visit Nurimaru APEC House, it means "a house where the world summits gather together for an APEC meeting." Located on Dongbaekseom Island, which is noted for its beautiful, natural landscape accented by dense camellia and pine trees.

Next, head to Gyeongju and explore Bulguksa Temple, the representative relic designated as a World Cultural Asset by UNESCO in Gyeongju. And then visit Gyeongju National Museum. Its holdings are largely devoted to relics of the Silla kingdom, of which Gyeongju was the capital.

Continue to visit Daereungwon Tomb Complex. This park has more than 20 large and small tombs from the Shilla period and has been designated Historic site. The tombs are presumed to be those of kings and court officials.

The last stop for today, Cheomseongdae Observatory which is the oldest existing astronomical observatory in Asia. Constructed during the reign of Queen Seon-deok (r. 632-647), it was used to observe stars in order to forecast the weather.)

A morning tour will introduce you to Andong Hahoe Village, home to descendants of the Ryu clan of Pungsan and well-known for its traditional houses. Hahoe Village boasts exquisite scenic sights: the elegant Nakdong River flowing around the village, the magnificent Buyongdae Cliff, endlessly unfolding sandy beaches, and lush, ancient pine trees.

Hahoe Village was added to the UNESCO World Heritage List under the category of "Historic Villages in Korea" on July 31, 2010. Next, visit Hanji Theme Park where you can get a chance to experience the Hanji making process. A short transfer will bring you to your hotel in Pyeongchang.

This morning, visit the Ski Jump Tower Observatory by monorail from the Olympic Winter Games Pyeongchang 2018. Enjoy the view of the Sky Lounge and have some free time enjoying coffee or tea. Then, travel to to Yangyang for a short hike at Jujeongol of Mt. Seorak. Return to Seoul in the evening. Drop off service is available at T-Mark Grand Hotel, T-Mark Hotel, Lotte Hotel Seoul and Center Mark Hotel.

Fridays (guaranteed with one person)