An interesting small group tour which not only highlights the capital, Seoul, the historical aspects of Gyeongju and the colourful port of Busan but adds a visit to the demilitarized zone. 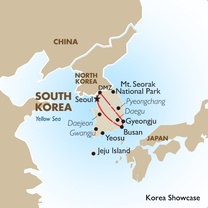 Korea is often referred to as the "Land of the Morning Calm”. This small group journey is perfect for those who are looking to experience true Korean culture as Korea has 5,000 years of unique cultural history.

Seoul, the capital of South Korea, is a city of contrasts where the new and the old co-exist in perfect harmony. Ancient palaces combine with modern cultural facilities and popular shopping districts. Seoul offers shoppers a wide variety of merchandise at large department stores, duty-free shops and at open air markets and arcades. During your stay, visit the Changdeokgung Palace, preserved from the days of royalty. Adjoining it is the picturesque Secret Garden, landscaped with ponds, woods and a pavilion.

Also visit the Jogyesa Temple, the principal Zen Buddhist Temple in South Korea and the Blue House, the official residence of the head of state for South Korea, a large complex of buildings in traditional Korean architectural style. Then it is time for shopping at the open-air South Gate Market and the shopping street, Insa-dong, famous for its antique stores.

The next day, visit the Korean Folk Village where life from the past is recreated daily through activities and displays. Afterwards, head to Demilitarized Zone (DMZ) which is located 44 kilometres/27 miles northwest of Seoul. From the Dora Observation Platform you will have a view of North Korean territory including the Propaganda Village, the People's School and Gaeseong City, the old capital city of the Goryeo Kingdom. Later, return to Seoul and continue to Gyeongju.

For a thousand years until the 10th century, Gyeongju was the capital of the Silla Dynasty. Now, almost another thousand years later, Gyeongju is an open-air museum with the remains of temples, tombs, shrines, palaces, gardens and castles. In the centre of town, Royal Tumuli Park is a huge walled area with 20 royal tombs. Nearby is Cheomseongdae, one of the oldest observatories in Eastern Asia.

The finest example of Silla temple architecture is Bulguksa, a magnificent temple built on a series of stone terraces just outside Gyeongju. High above the temple, a seated Buddha gazes over Gyeongju from the Seokguram Grotto also visited. There will be time to go to the Gyeongju National Museum with its collection of mainly Silla relics.

Busan is South Korea's largest port and second largest metropolis. During your stay here, take in the view from the Busan Tower, go to the Jagalchi Fish Market and to the Municipal Museum. Also visit Nampodong shopping street, one of the favourite haunts of the locals. Finally head to Haeundae Beach.

Return to Seoul for an overnight stay.

Your guide will collect you from your hotel in the morning. Your first day in Seoul will start with a visit to Jogyesa Temple, as the main temple as well as the district head temple of Jogye order in Seoul, and it is the center of Korean Buddhism. Next stop is Gyeongbokgung Palace and you will witness a changing of the Guard Ceremony. Built in 1395, Gyeongbokgung Palace is also commonly referred to as the Northern Palace because its location is furthest north when compared to the neighboring palaces of Changdeokgung (Eastern Palace) and Gyeonghuigung (Western Palace) Palace. Gyeongbokgung Palace is arguably the most beautiful and remains the largest of all five palaces. Then you will pass by Presidential Blue House, Cheongwadae Sarangchae (closed every Monday) before stopping for lunch. After lunch, visit Changdeokgung Palace which was the second royal villa built following the construction of Gyeongbukgung Palace in 1405. It was the principal palace for many kings of the Joseon Dynasty and is the most well-preserved of the five remaining royal Joseon palaces. Then visit the Insadong Arts and Crafts Street. Insa-dong Street is one of the most memorable attractions in Seoul and represents the focal point of Korean traditional culture and crafts. Stores in Insa-dong specialize in a wide variety of goods that can only be purchased or appreciated in Korea: hanbok (traditional clothing), hanji (traditional paper), traditional teas, pottery, and folk crafts.). Also visit the Namdaemun Traditional Market, the largest traditional market in Korea with shops selling various goods. Most of the goods are made directly by the store owners. At the end of the tour, you will be transferred to your hotel.

Your guide will collect you from your hotel in the early morning. Remember to bring along your passport for today's visits. Your first stop today is Imjingak Park which was built to console those from both sides who are unable to return to their hometowns, because of the division of Korea and here is where the "Freedom Bridge" is located.

Your next stop is the 3rd Infiltration Tunnel which was discovered by South Korea in 1978. It spans over 1,635m in length, 2m in width and 2m in height and is located 52km from Seoul. It is estimated that approximately 30,000 soldiers could move through the tunnel per hour. The scale is similar to the 2nd Tunnel, but it was thought to be more threatening as an invasion tool than the 1st and 2nd Tunnels. Next you will visit the DMZ Theater/ Exhibition Hall, to view a video which explains about the 3rd tunnel and other tunnels as well as history of the division of Korea.

After the video, your will visit the Dorasan Observatory, here visitors can overlook North Korea and various locations including Gaeseong, Songaksan, Kim Il-Sung Statue. It was first opened to the public in January 1987. And then a visit to Dorasan Station, a railway station on the Gyeongui Line, which is the northernmost stop on South Korea's railway line. Located 56 kilometers from Seoul and 205 kilometers from Pyeongyang, the station was opened as a tourist attraction on April 4, 2002 right before the 2002 Korea-Japan World Cup. At the end of your day, you will pass by Unification Village. Return to Seoul and you will be dropped off at City Hall or Itaewon Street and not at your hotel. Your guide can assist you to obtain transport back to your hotel.

The morning is at your leisure. Later, you will drive to the Korean Folk Village. Here you will see over 260 traditional Korean buildings relocated to the folk village and restored according to the original life style of the Korean people in the late Joseon period. Household goods of each region are exhibited, showing their own grace so that you can experience traditional Korean lifestyle. On your return to Seoul, you will be dropped off at the Seoul station to take the train to Gyengju, on arrival you will be met my a local driver you will transfer you to your hotel.

Today's sightseeing in Gyeongju includes Bulguksa Temple, the representative relic of Gyeongju. Seokguram Grotto, located on Tohamsan Mountain and is the representative stone temple of Korea. The official name of Seokguram, National Treasure No. 24, is Seokguram Seokgul. Designated as a World Cultural Heritage Site by UNESCO in 1995, it is an artificial stone temple made of granite. Gyeongju National Museum, representing Gyeongju, which used to be the capital of Silla (BC57-AD935), the museum is where you can view the cultural history of Gyeongju district. In the Main Hall you can see earthenware and in the Arts and Crafts room you can see various artwork and craftwork. The other galleries exhibit household goods. These various types of items show life in the Royal Court during the Silla Period. Visit Daereungwon Tomb Complex, large ancient tombs of kings and nobles of the Silla Kingdom and Cheomseongdae, the oldest existing astronomical observatory in Asia. Then proceed to Busan for overnight.

Busan is a major port city boasting a coastline with fine beaches, scenic islets and tall mountains. After breakfast you'll take a tour of Busan, which includes Gamcheon Culture Village which is formed by houses built in staircase-fashion on the foothills of a coastal mountain, earning this village the nickname "Machu Picchu of Busan." Many alleys that cut through this community are vibrantly decorated with murals and sculptures created by the residents. Youngdusan Park offers a beautiful view of Busan Port and the surrounding scenery. In particular, the night view from Busan Tower is magnificent. Next, visit Jagalchi Fishery Market is Korea's largest seafood market, selling both live and dried fish. After the Korean War, the market solidified itself as a fish market. Last spot will be Dongbaekseom Island which is an island located off one end of Busan's famous Haeundae Beach. Although the years of sedimentation have connected the island to the mainland, Dongbaekseom was originally an island and is still referred to as one. At the end of your day, you will be transferred to the Busan station for your train to Seoul. On arrival, you will be met by a local driver and transferred to your hotel.

Transfer to Incheon International Airport by a local driver.