DELUXE | PRIVATE-GUIDED: From the famous Bund to the fascinating Yu Yuan Gardens, Shanghai combines the traditional with a glimpse of the future with its architecture and progressive lifestyle plus much more. 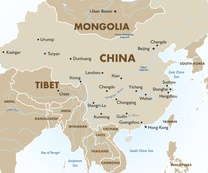 Shanghai is a city which has been described as futuristic due to the amazing recent developments to its infrastructure and architecture. However, although these developments will be found fascinating, the traditional side of the city still exists in its neighbourhoods.

A walk down pedestrian Nanjing Road will show a side of the city which has long been in existence with its small stores including a number of emporiums selling a variety of antiques. The legendary Bund or riverside boardwalk reveals examples of the British and French late 19th Century, early 20th Century architecture for which Shanghai is famous.

Visits to the atmospheric Jade Buddha Temple and the traditional extensive Yu Yuan Gardens will remind you of a bygone era that should never be forgotten.

This deluxe hotel is located in French Concession area-one of the nicest districts in Shanghai. It was originally the French Embassy and is now part of prestigious Japanese hotel chain. The Okura Garden Hotel Shanghai is in the heart of the city centre and enjoys excellent expressway connections to the Shanghai Railway Station, the Hongqiao Airport and the Pudong International Airport. The subway system provides a convenient way for you to visit Shanghai and to shuttle around the city. South Shaanxi station on line 1 is located immediately adjacent to the property.

If you are staying longer, you might consider our 1 & 2 day tours to Suzhou and its famous Classic Gardens, Grand Canal and silk factories. Hangzhou can also be considered as it is only 30-minutes by high-speed train from Shanghai. Speak to your Goway destination specialist for more details.