FIRST-CLASS | PRIVATE-GUIDED: A journey through the heart of Malaysia travelling from Singapore to Penang while enjoying not only the varied and colourful countryside but also stopping in interesting destinations. 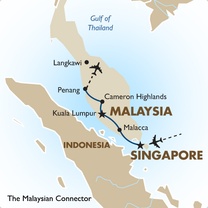 If you happen to be travelling from Singapore to Penang, why not add a tour through Malaysia? Malaysia includes modern cities, first rate beach resorts, lush jungles, verdant rainforests and numerous National Parks. The influences of the ethnic mix also add to Malaysia’s attraction with its Malay, Chinese and Indian cultures.

Set off by overland vehicle from Singapore, cross the causeway into Malaysia and travel through rural areas with views of plantations and small villages en route to your first stop, Malacca. Start with a tour of the city which includes the Cheng Hoon Temple built in 1685 and the oldest functioning temple in Malaysia combining Taoism, Confucianism and Buddhism, the Kampong Kling Mosque with its interesting architectural style, the Baba and Nonya Museum, a showcase for the local history of ethnic Chinese Malays and the Porta de Santiago, the remains of a Portuguese fortress. There will be time to visit Jonkers Street with its decorated houses and antique stores. Overnight in Malacca.

The next day, continue by overland vehicle to the capital, Kuala Lumpur. On arrival, your tour of the city includes the King’s Palace, an impressive white building standing in its own grounds, the National Mosque, the interestingly designed main Railway Station, the National Monument dedicated to those who fell during World War Two, the Sultan Abdul Samad Building, a major architectural landmark, China town and the Seri Mahamariaman Temple, the oldest Hindu temple.

The next day continue your sightseeing in Kuala Lumpur visiting a pewter factory and the Batu Caves, a series of cave temples and a sacred Hindu shrine. Later head north to the Cameron Highlands stopping en route to see the cottage industry of basket weaving followed by the Lata Iskandar Waterfalls.

Depart with a day of sightseeing en route to Penang.  Visit the Sam Poh Tong Cave Temple built into a hillside, the royal town of Kuala Kangsar with its massive marble structure, the Iskandarian Palace, home of the Sultan of Perak and the town of Kuala Sepetang where you will visit the scenic mangrove swamps. Eventually cross over the causeway into Penang for overnight.

Two major attractions in Penang are Georgetown, the main city where its old historical centre is a UNESCO world heritage site with its British colonial architecture and the several beaches, mainly in the north of the island. The next day, begin your exploration of Penang. Start with Georgetown visiting the Reclining Buddha, gold plated and 33 metres/107 feet in length, the Kek Lok Si Temple, the largest Buddhist temple in South-East Asia, Fort Cornwallis, the largest standing fort in Malaysia and Khoo Kong Si, the largest Chinese Clan House. You will also have a ride in a Trishaw through the streets of Georgetown.

The following morning your tour of Malaysia concludes.

Meet at your hotel in Singapore at 08:00am and depart to Malacca with 1 stop in Johor Bahru to change vehicle. Continue the journey with estimated arrival time around noon, tour of the historic sites such as Cheng Hoon Teng Temple - the oldest functioning Chinese temple in Malaysia, Kampung Kling Mosque, Jonker Street (Antique Row), Baba and Nyonya Museum, Stadhuy's Building, Malacca Clock Tower, Christchurch and the famous Porta de Santiago.

Breakfast at hotel and check out.

Depart by 8:30am to leave for Kuala Lumpur, Malaysia's capital city. Upon arrival you will be given a tour of the King's Palace, National Mosque and Railway Station, National Monument, Independence Square, Sultan Abdul Samad building, Selangor Club, St. Mary's Church and the world's tallest free-standing flagpole. The tour resumes for a visit to the Seri Mahamariaman Temple and the colourful Chinatown for bargain hunting.

Before checking into your hotel, visit the KL Tower the tallest Communication Tower in South East Asia for a stunning panoramic view of the city and the Petronas Twin Tower, the highest twin tower in the world.

This tour brings you to the outskirt of Kuala Lumpur city. Firstly, you will visit the well-known Royal Selangor Pewter factory, which is the largest in the world. Here, you will get a brief tour around the factory in which you will not only learn about its history, but you will also be given a demonstration of some of the many processes of a pewter product such as casting, filling, polishing and hammering. Thereafter, there will be a brief stop at the Batik Centre, were you will discover how the popular Malaysian fabric is designed and printed. The last part of the tour will be the most exciting, as you will then proceed to the Batu Caves. This world famous limestone
outcrop houses a Hindu temple and is visited by thousands of pilgrims and tourists every year. Before climbing up the 272 stairs in order to reach the main cave temple, you will have a chance to admire the impressive golden structure of the 140 feet tall statue of Hindu God Lord Murugan located at the entrance. Once you reached the top you will not only be greeted by several cheeky monkeys, but you will also have a great view of the beautiful skyline of Kuala Lumpur. The rest of the day is at your leisure.

Note:
Tour not available for 3 days on Thaipusam Festival (Eve of the festival, festival day and one day after the festival).

Early morning set off to Penang.

Early morning set off to Penang. En route visits along the way include the Sam Poh Tong Cave Temple in Ipoh, after have a break for lunch in Ipoh for local tastes (at
own expense). Next we will have a photo stop the Ubudiah Mosque in Kuala Kangsar.

We will continue our journey to Penang, en route visiting is Bukit Merah Resort. It is one of Malaysia's premier eco-tourism destination in the northern region. The resort offers a wide variety of excitement and the main attraction is their conservational Orang Utan Island, the only one in Peninsular Malaysia. This is a unique Eco Park with its educational walk-in enclosures, where you can experience nature by interacting with some friendly animals. Here's an amazing orang utan fact: 97% of the orang utan's DNA is identical to that of a human. In fact, the name 'orang utan', when translated from Malay to English literally means 'person of the forest'. Not surprisingly, they are extremely intelligent creatures that have the ability to think, feel and express emotion the way we do.

After the visit, cross over to Penang, using the forth longest bridge in the Southeast Asia, arriving in the evening.

Depart your hotel at 9:00am for a City, Culture, and Heritage tour of Georgetown, which was officially declared a UNESCO site in 2008. Visit the 3rd longest reclining Buddha figure in the world, followed by Kek Lok Si Temple, also known as Temple of 1000 Buddhas, built in 1904. It is the most beautiful and largest Buddhist temple complex in South East Asia. Next, visit Fort Cornwallis, the landing site of Captain Francis Light when he arrived to start the first British colony in Penang in 1786. The tour carries on with a visit to the water village of The Clan Jetties at Weld Quay, so named as residents of each jetty share a similar surname. Continue along to Pitt Street, also known as "The Street of Harmony". Here churches, Chinese temples, mosques and Hindu temples are built side by side in harmonious existence for centuries. Visit the intricate Khoo Kong Si clan's house and enjoy a breezy trishaw ride, a still popular mode of transport in Georgetown. Return to the hotel and the rest of the day is at your own leisure. In the late evening, you can explore the nightlife along Batu Ferringhi, Penang style!

At noon, transfer to Penang International Airport for your onward flight.