Traverse the Mekong River on a boutique river cruise taking you from Laos to China, passing through Thailand and Myanmar on the way. Survey the famous markets of Luang Prabang in Laos before learning about the opium trade at the Golden Triangle and visiting a tea plantation in China’s Yunnan Province. 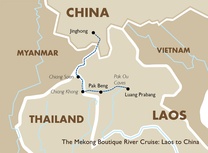 This 15-day river cruise takes you through the heart of the Golden Triangle on the Mekong River onboard the brand-new boutique vessel, the RV Laos Pandaw.

This exciting Laos vacation begins in Luang Prabang, at the meeting point of the Mekong and Khan Rivers. This Laotian city boasts a charming blend of French colonial architecture and bustling modern growth. It was declared an UNESCO World Heritage Site in 1995. A city tour will get you acquainted with Luang Prabang’s 33 wats and village-like atmosphere. In the morning, witness the Tak Bat, when saffron-robed monks silently collect alms throughout the city. Then visit the open-air Morning Market and an ancient royal palace. Embark on the RV Laos Pandaw to continue your exploration of these Southeast Asian countries.

The RV Laos Pandaw is a brand new vehicle built in 2015. With its brass railings and teak paneling, the vessel is a handcrafted work of art ready to carry you up the Mekong. Its 10 cabins are equipped with comfortable bedding and linens, and the lounge and restaurant offer world-class food from a local master chef. Meals can be personalized and the vessel has a 24-hour laundry service as well. Onboard the RV Laos Pandaw, you will explore the dense jungle wilderness and unspoiled nature of the Mekong River and the Golden Triangle. Pass by the Kuang Si Waterfalls and swim in the crystal-clear waters and turquoise pools beneath the magnificent falls. At the Pak Ou Caves, marvel at thousands of Buddha statues that decorate the caves.

Pass by the river village of Pak Beng to get a glimpse of traditional Laotian life. Then pass into Thailand and visit Chiang Saen, a sleepy river town covered in ruins of an ancient Thai kingdom. Chiang Saen also acts as the centre of Chinese trade in Thailand, so marvel at the constant flow of trading barges heading down the Mekong into Thailand. Nearby Chiang Saen is Sop Ruak, the official centre of the Golden Triangle, where Laos, Myanmar, and Thailand meet. Visit the House of Opium and Hall of Opium for a fascinating lesson on the opium trade that used to dominate the region. After educating yourself on the region’s history, dip into Myanmar to explore the smuggler city of Tachileik. Located on the Thai border, this small town bustles with illegal trade and massive marketplaces peddling a variety of goods.

Leave Myanmar behind and sail up the Mekong, straddling the border between Laos and Myanmar on your way to Yunnan Province in China. The river grows narrower and the current faster as you move closer to the Chinese border. Stop off at Laotian villages to inspect the production of lao-lao, a Laotian whisky. At night, listen to Laotian folk stories as you’re surrounded by floating fire lanterns.

Your Mekong vacation ends in Jinghong in China’s Yunnan Province. Jinghong has belonged to the Burmese, Chinese, and Thai, so the city offers a fascinating conflux of cultures. It’s also rapidly developing, with apartment blocks and shopping malls popping up everywhere you look. It’s rarely visited by westerners, so consider yourself lucky as you tour a local tea plantation and explore its fascinating blend of architectures.

This Asian trip from Laos to China up the Mekong River offers a fascinating blend of cultures and natural wonders.

You will be picked up this morning from either the Luang Prabang airport or a city hotel and transferred to the ship. Check in to your cabin and enjoy lunch on board, then take an afternoon walking tour of Luang Prabang. This enchanting UNESCO World Heritage city is filled with traditional Laotian wooden houses and gilded monasteries. Return to the ship for drinks and dinner and a welcoming Lao baci ceremony.

Enjoy a guided visit to the key Buddhist temples, libraries and the Royal Palace. The afternoon is at leisure for individual exploration. This evening, visit Luang Prabang's lively night market with its buzzing cafe life.

This morning, drive to the amazing jungle pools below the Kuang Si waterfall and visit a fascinating butterfly garden. Back on board for lunch, sail upstream towards Pak Ou. Enjoy canapés and cocktails on the riverbank this evening.

This morning, visit the Buddhist sanctuary set amongst spectacular limestone cliff faces. Explore the area more in depth using a local boat, and pay a visit to the so-called "Whisky Village". Moor overnight in the jungle.

Today is spent sailing through dramatic scenery of lush jungle and forest punctuated by tiny villages clinging to the riverbank. Stop for a walk ashore and enjoy a presentation on Laos language and culture. Moor overnight in the jungle.

As you continue upstream the river becomes faster and more treacherous. This passage can be quite exciting and it can be quite engrossing to simply watch the river from the sundeck. This morning will feature a cooking demonstration of favourite Laos dishes by on-board chefs. This afternoon, walk around the market town of Pak Beng. Moor overnight in the jungle.

Today is a long sailing day covering a considerable distance, punctuated by a morning walk around Ban Pak Sit and an afternoon walk around Pak Tha, both charming riverside villages. Moor overnight in the village.

After an afternoon visit to a local pagoda, proceed to Lao and Thai Immigration, sailing into Thailand in the late afternoon. Moor overnight in Chiang Kong.

Here the river forms the border between Thailand and Laos. Make a shore visit to a Thai village. In the evening, traditional Thai dancers will perform on deck. Moor overnight in Chiang Saen.

After breakfast, visit the Golden Triangle and fascinating Opium Museum. Enter Burma and explore the city of Tachilek and its extraordinary market. Notorious for smuggling, Tachilek is now essentially a massive duty-free area. Back on board, pass through Thai Immigration and sail onwards, with Laos on the right and Burma on the left. Moor overnight in the jungle.

Leaving behind the bustle of the Golden Triangle, return to a Mekong that is narrower and faster than anything encountered so far on this journey. This afternoon, take a walk around Pok Lok village followed by a talk on the region's ethnography.

Today visit Ban Pak Keo, one of two villages along the Mekong famous for producing lao-lao or "Laotian whisky". Earthenware jars filled with water and rice are covered so that the rice ferments and produces alcohol. Stop at Ban Na Kor (Sob Luoy Port) in the afternoon, then sail on to a remote sand bank to moor for the night. Canapes and cocktails are served on the sandbank followed by Laos folklore stories and traditional floating fire lanterns.

Crossing into China at Guan Lei Port this morning, take a walk and explore before passing through immigration. Sail the final stretch of your journey into Jinghong, founded in 1180 by Tai King Phanya Coeng. Take a city tour, then enjoy an evening cultural show at the Maxmumbani theatre. Moor overnight in Jinghong Port.

The city of Jinghong has had a turbulent history of Thai, Burmese and Chinese occupations. These influences can be seen in its buildings and heard in the local language. Take a tour of a local tea plantation with trees aged over 800 years. Visit a local Dai village (Dai refers to "Thai"). Dai people make up the largest ethnic group in Yunnan province. Moor overnight in Jinghong Port.

Disembark after breakfast at the Jinghong Port, near Xishuangbanna Bridge, and transfer to either Jinghong airport or a city hotel for your onward journey.