Enjoy a one week leisurely cruise on the Indian section of the Brahmaputra River through stunning, colourful scenery. Go on safari to view amazing wildlife, get to know local fascinating ethnic tribes and learn about the folklore surrounding the river. 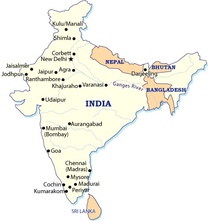 The Brahmaputra River (named after the son of the creator of the cosmos in Hindu mythology) is one of the holiest rivers in India and which is considered holy by Hindus, Buddhists, Jains and Bonpas. It is the only navigable river in the world from which you can see the high, snow covered Himalayan Mountains. It is also the only river, apart from the Zambezi River in Africa, from which elephant, jeep and boat safaris are conducted.

Start your cruise itinerary on arrival at the airport of Guwahati, Assam’s largest city. En route to your cruise boat, visit the Kama-Kaya Temple.

The Mahabaahu, your on board home has 23 comfortable cabins all with private bathroom and TV. Later sail on the river passing Peacock Island renowned for its Golden Langur.

The next morning, sail through stunning scenic countryside and view wildlife including dolphins and birds of prey. Later have a short talk on board about the local river life.

The following day, pass the town of Tezpur, a historical city of Assam whose existence dates back centuries. See the 3 kilometre/2 mile long arched bridge. Arrive at Silghat and here have an excursion to a tea plantation and factory producing the famous Assam tea.

The next morning brings a visit to Kaziranga National Park which is spread over 858 square kilometres and is located in the floodplains on both sides of the Brahmaputra. Here you will have an elephant safari hopefully viewing the elusive Greater One-Horned Indian Rhinoceros and Indian Tiger. Arrive at Bagori and have an open jeep safari to view more wildlife. Later, visit Biswanath Ghat, a small village where women weave colourful traditional handicrafts by the riverside.

The following day is a boat safari to the eastern range of Kaziranga National Park where one can see vultures, water buffalo, monitor lizards and otters. This evening, have an alfresco dinner on a deserted island.

Next day is a visit to meet the local Mishing tribe of people who weave their own colourful costumes. Spend time getting to know them. Mishings have their own peculiar folk music, dances and musical instruments. Most of these are used or performed on their social and religious festivals.

The last full day on board visits Majuli and its 15th Century Satras (monasteries). Then continue to Sibsagar where the inhabitants are originally from southern China as far back as the 13th Century. See the highest Shiva Temple in India and then learn about tea-making from a tea plantation family.

Arrive the next morning at Jorhat where you disembark.

Arrive at the Guwahati International Airport and with packed lunch, we drive through the busy streets to the Kamakhya Temple. This Temple is devoted to Kama Khya, the eternal Feminine- the goddess of desire.

After the Temple visit, we drive towards Pandu Port and check into the Cruise and gather on the open deck to enjoy the first sail! A quick orientation and we de-board for a short visit of the picturesque Peacock Island, the smallest island on the Brahmaputra (flight time permitting) famous for the highly endangered Golden Langur. It would be a good idea to have one's binoculars and cameras at hand.

Proceed into the evening with a talk on 'Kamakhya and the occult in Assam'. Soon MV Mahabaahu drops anchor and the evening follows into the welcome dinner.

MV Mahabaahu lifts anchor early. We enjoy Yoga on the deck for an hour and move on for breakfast. We enjoy a talk on 'Assam, its geographical location in the national and international context and how it is acclaiming recognition'. MV Mahabaahu heads on towards an island that is occupied predominantly by a 'Bangla' speaking Muslim community who are involved in extensive farming. After t visiting this village, we return to the ship for lunch and sail towards the Orang Point.

Evening sets in and over a cup of tea, we enjoy a talk on 'The River Brahmaputra and the tribal life'. We anchor at a deserted island for the evening and enjoy a bonfire and a barbeque.

NOTE: (Bonfire may be avoided if a suitable sandbank cannot be found or if we experience inclement weather conditions)

MV Mahabaahu sails early and we enjoy Yoga on the deck and move on for breakfast and for a talk on 'Wild life in Kaziranga with an overview of the wild life in India'.

We sail on for the next couple of hours and enjoy a relaxed lunch as we reach Silghat. After a talk on 'Tea, Jute &amp; Silk in Assam', we take a short drive to Kaliabore Tea Estate which is a vast undulating expanse with tea bushes. We proceed to the tea factory to see the processing of the Assam Tea and getting an insight into all that goes into preparing a cup-of-tea.

While returning to the ship, we visit a co-operative Jute Mill which is an interesting place to understand how the Jute fibre takes the form of very eco-friendly gunny bags. We enjoy a cultural evening on the ship followed by an early dinner.

An early wake- up call with Tea/coffee and we set out towards the Kaziranga National Park.

The most prized inhabitant of Kaziranga is the Greater One-Horned Indian Rhinoceros, but the Park is home to as many as 180 different mammals including wild elephants, tiger, deer, Asiatic wild buffalo and a rich variety of birds. We reach the Kohora Mihimukh range of the National Park and are ready to start our morning adventure. An elephant-back safari is an experience, to search for the elusive rhinoceros, tigers, swamp deer and hog deer and more and a large number of very interesting birds. The park never ceases to surprise its visitors!

After breakfast at a resort in Kaziranga, we drive on to Bagori, the Western Range of Kaziranga and get into the open jeeps for some more wildlife adventure and an extensive coverage of this magnificent park. We return to MV Mahabaahu, start sailing towards Bishwanath Ghat as we enjoy a leisurely lunch and a relaxed afternoon.

We get into the excursion boats to reach the shores of Bishwanath Ghat. We walk through the village and are struck by the simplicity of life while the weaver women surround us with their silk and cotton weaves. We enjoy some happy interaction with them.

We return to the ship to enjoy an evening on a deserted island and then proceed for dinner.
NOTE: (Bonfire may be avoided if a suitable sandbank cannot be found or if we experience inclement weather conditions)

Enjoy a relaxed breakfast over a talk on 'The River Brahmaputra and the life that exists alongside'.

We return to the ship for hot lunch.This evening, we enjoy the Chef's Cooking Demonstration and sample the snacks. The evening on a deserted island with bonfire is always exclusive! We enjoy dinner on-board.
NOTE: (Bonfire may be avoided if a suitable sandbank cannot be found or if we experience inclement weather conditions)

After Yoga and breakfast, we enjoy the sail towards the Mishing Village.

The Mishings live on the bank of river in 'Chang Ghars' houses with raised platforms. All Mishing women are expert weavers. We can buy the ethnic colorful cotton weaves and indulge in a dhoti tying and Mekhela Chaadar wearing demonstration.

We return to the ship to enjoy a talk on 'Sibsagar and the Ahom civilization' and proceed to get ready for a Traditional Assamese evening.

After breakfast, a talk on 'Majuli the seat of Neo-Vaishnav Culture' will be given and then you will board the excursion boats to the mainland. Here on, a drive takes you to a scenic corner of a Satra (Monastery) for an interesting cultural performance by Satriya singers and dancers.

Next, proceed to Kamlabari Satra to witness the Vaishnavite priests dancing to the rhythm of cymbals, drums and chanting in the temple premise. The humble dwellings of the monks are a revelation of utmost simplicity. Lunch will be served on board the boat as it sails towards Neamati Ghat.

After lunch, drive through the countryside to reach Sibsagar, the ancient city, built around a huge man made water tank ordered by the Ahom queen. A town that literally means 'the ocean of Lord Shiva'. The district is strewn with the tell-tale ruins of a powerful empire of the Ahoms. Sibsagar was the capital of the Tai-speaking Ahoms who came in the 13th Century AD to the area from the north-east and were essentially of Tibeto-Burman origin. The Shiva Dol, constructed in the year 1734 is believed to be one of the highest Shiva temple in India.

You will visit Talatal or Kareng Ghar which was the palace of the Ahom Kings and after a leisurely stroll in and around the monument, you go on to Rang Ghar which was a place for hosting wrestling bouts and buffalo fights and other entertainment or important meetings of the Royals and their guests. Return to boat by sunset for the farewell dinner.

Your morning is at leisure to enjoy, Yoga or bird-watching or perhaps an early morning indulgence in the spa. After a relaxed breakfast you will disembark, please have your baggage ready prior to breakfast. En route to the Jorhat airport a stop for shopping at a tea Estate and to enjoy a traditional Assamese early lunch. Drive on to the airport to board the flight to the Kolkata departing at 2:15pm to arrive at 5:05pm (subject to change).

Upstream
Saling dates to be advised

Downstream
Saling dates to be advised