DELUXE | PRIVATE-GUIDED: Explore the art and architecture of the medieval centres of Kathmandu, and experience the luxury of staying in an award winning ‘living museum’. Then escape to the country, and take in the infinite charms of rural Nepal while enjoying a holistic lifestyle. 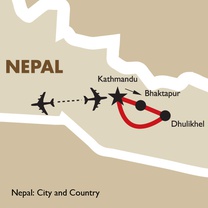 Perched high in the Himalayas, it’s hard not to feel close to the gods in Nepal. This 7-day trip combines the urban charms of Kathmandu with the simpler lifestyles of rural Nepal, always keeping an open mind and heart to the country’s holistic side.

Begin in Kathmandu, on the edge of the Himalayas, perched in the Kathmandu Valley, 1,500m above sea level. You’ll visit Dubar Square for in-depth sightseeing on your second day, including the temple of Kasthamandap, the three storied Akash Bhairav Temple, and the old royal palace, Hamuman Dhoka. It’s an ideal place to learn about how Hinduism and Buddhism have shaped local traditions. Afterwards, take a cycle rickshaw to Thamel and see the traditional houses of Kathmandu up close. Your final destination is the 2000-year-old ‘monkey temple,’ Swayambhunath.

Go on to Patan, the city of a thousand golden roofs, now considered part of Kathmandu. Artisans define the city as they have for thousands of years, working in the shadow of its 50 or so temples. After lunch, go on to the 6th century village of Bungamati, where life remains steeped in the traditions of medieval Nepal. The heritage continues at Khokana, before you visit the sacred Hindu shrine of Pashupatinath, said to house the sacred linga of Lord Shiva. In the evening, witness the Aarti ceremony at the temple.

Leave Kathmandu behind and visit the Palace of 55 Windows in Bhadgaon. The next three nights are spent in Dhulikhel, a town with spectacular views of over 20 Himalayan peaks. Here you’ll visit the Buddhist pilgrimage site of Namobuddha, built on the relics of Prince Mahasattva, who is said to have saved a sickly tigress’ life by cutting pieces of his own flesh for her to eat. Your second full day here is spent at leisure, allowing you to relax or spend more time sightseeing as you see fit before returning to Kathmandu for your flight home.

Welcome to The Kingdom of Kathmandu is situated between India and Tibet, and famous for Mount Everest, the Shangri-la of the East. The rich cultural and artistic heritage of Nepal is synthesized in Kathmandu, the capital, which lies in a valley, south of the Great Himalayas at an altitude of 1,500 m. Successive dynasties have left their marks in the stupendous palaces and temples, sculptures and carvings found throughout the valley. Kathmandu is also the largest city of Nepal and its festivals exceed the number of days in a year. The valley has seven heritage sites that have been enlisted in cultural World Heritage Site list. On arrival you will be transferred to your hotel until your afternoon excursions.

This afternoon you will visit Boudhnath, one of the largest stupas of its kind in the world. It stands with four pairs of eyes in the four cardinal directions, keeping watch for righteous behavior and human prosperity. It is built on an octagonal base inset with prayer wheels. This afternoon visit Patan, one of the oldest Buddhist cities in the world and known for its fine arts. Here you will visit the Durbar Square, and its UNESCO World Heritage Sites.

Today's touring begins with a visit to the Durbar Square (note Durbar square means "meeting place"), Here you'll find a gathering of temples and shrines including the temple of Kasthamandap, believed to have been made from the timber of a single tree; the three storied Akash Bhairav (God of the sky) Temple and Hanuman Dhoka, the old royal palace, named after the monkey god. From the entrance gate of the Hanuman Dhoka you will enter the Nasal Chowk courtyard. Continue on to the Temple of the Living Goddess, or Kumari House where you may catch a glimpse of the "Kumari". Kumari is a tradition in Nepal of worshiping young girls as manifestations of the divine female energy (or "Devi") in Hindu religious traditions.

Enjoy a cycle rickshaw ride to Thamel. The rickshaw ride will take you through the narrow streets of Kathmandu and you will see the old traditional houses with many wooden sculptures.

Lunch (direct payment - suggested Kaiser Cafe) at Thamel and some free time to enjoy in this tourist area. You will find many shopping options for traditional clothes, music, thangka, etc.

This afternoon visit Swayambhunath, also known as "the monkey temple". The 2000 year old, world famous Buddhist Stupa has a lofty white dome and glittering golden spire which is visible for many miles from all sides of the valley. Painted on the base are the all-seeing eyes of Lord Buddha and above each pair of eyes is the 'third eye' signifying the wisdom of looking within.

Later this morning, visit Patan city of fine arts. Patan is better known as "The city of a thousand golden roofs." Once separated from the capital, Patan and Kathmandu are now separated only by a bridge over the Bagmati River. The city of Patan has recovered its label of origin "Lalitpur". The historic heart of the city is entangled with narrow streets and theatrical decoration: brick houses with carved wooden balconies and bronze decorations, patios and backyards that house oratories, temples, etc. The city is famous throughout the country for its tradition of blacksmiths and goldsmiths. Artisans model effigies of the divinities of the Hindu and Buddhist pantheons. The city has more than 50 main temples, some of which were destroyed or damaged by the earthquake of April 2015.

Many stupas, chaytyas and bahals (ancient Buddhist monasteries) bear testimony to the long history of Buddhism in the city that remains today a Bastion of Newars Buddhism in the Kathmandu Valley. The four stupas, erected in the four cardinal points, originally defined the city. They were erected during the reign of Emperor Ashoka some 250 years before our era.

Continue to the Bungamati Village which is a 6th century village within the Kathmandu Valley. Here you will see the Shikara-style temple of Rato Machhindranath ringed by the traditional houses, where the villager still follow a traditional lifestyle and engage in traditional occupations. Bungmati is the living museum within the Kathmandu Valley, which preserves the prosperous legacy of arts and civilization of the ancient and medieval Nepal. Other sights to visit around village are Bungamati Culture Museum and , Dey Pukha (central pond).

Not far from, Bungmati, lies another small traditional Newari Village - Khokana which is another living museum. This village has its own incredible history and has the most authentic Newari culture that has been preserved here in every house since the medieval era. Most of the households in Khokana depend on farming and traditional occupations like woodcarving. You will see women spinning traditional wool-wheel (charkha) to weave the wool and men carrying kharpans (the circular boxes joined by a bamboo and stringed down to air to put their farm products inside it.

Late afternoon visit the World Heritage Sites at the Pashupatinath Temple, one of the most sacred Hindu shrines in the world. The richly ornamented pagoda houses the sacred linga, or phallic symbols, of Lord Shiva. It stands as a symbol of unity bringing together the different sects of Hinduism under a single fold. It is situated on the bank of the sacred Bagmati River. Please note: Non-Hindus are not permitted to enter, but can view the temple from a special vantage point. Devotees can be seen taking ritual dips in the holy Bagmati River, a sacred place of cremation and where thousands of pilgrims from all over the world come to pay their respects. This temple is also known as 'The Temple of Living Beings, and the presiding deity here is Shiva.

This evening you will witness the Aarti ceremony which is one of the most mesmerizing rituals at Pashupatinath Temple and is known as the Pashupati Bagmati Aarati. The Bagmati is the holy river that flows through the temple. The river divides the temple into two sides, with the main Pashupatinath Temple being on one side and the location of this Aarati on the other. The priests perform the Aarati by taking oil lamps and moving them in circular motion accompanied by the chanting of religious song. The Aarati starts at 6 pm every evening. This is a ritual that allows everyone to be a part of it and creates an environment of union of God and the devotees.

This morning drive to Bhadgaon, also known as Bhaktapur or the "city of devotees". Founded in the 9th century it is the home of medieval art and architecture. Here you can visit the Durbar Square, with its array of temples, and the Palace of 55 Windows. This Palace is the best example of the Pagoda style of architecture and stands on five terraces, on each of which stands a pair of figures: two strong men, two elephants, two lions, two griffins and two goddesses.

Continue to Dhulikhel, set amidst verdant hills and valleys and it is one of the most popular places to witness the perfect panoramic views of more than 20 Himalayan peaks ranges stretching from Mount Annapurna in the far west to Mount Karolung in the Far East.

Upon arrival, check in at hotel and the rest of the day is at leisure.

In the morning, drive to Namobuddha an important Buddhist pilgrimage site and one of the 3 main stupas of Kathmandu valley. The stupa was built on the bones and hair of prince Mahasattva. According to the Buddhist sutras Mahasattva was one of Buddhas former incarnations. He was the youngest of the three sons of king Maharatha. One day as the three brothers were walking through the forest, they saw a tigress with the five cubs she had given birth to. She was so hungry she could hardly move. The three princes went away, but Mahasattva decided to go back and started to cut his flesh to give it to the tigress to eat. When his brothers went to look for him they found only his bones and hair. The stupa was built on top of these remains.
Return to the hotel.

Later today enjoy a walk through the nearby village of Dhulikhel.

The rest of the day is at leisure.

The day is at leisure.

Today you will depart and return to Kathmandu where you will proceed to the airport and connect with your onwards flight.