FIRST-CLASS | PRIVATE-GUIDED: Explore the beauty and vibrancy of Nepal. Start in Kathmandu and then travel to Bandipur, Pokhara and Royal Chitwan National Park. Immerse yourself in this stunning country with a trip that includes visits to Buddhist stupas, picturesque towns nestled in the Himalayan foothills, soaring peaks and dense forests and wildlife in National Park. 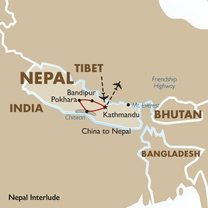 Explore the highlights of Nepal, starting with a half day sightseeing tour of Kathmandu city and Swayambhunath to visit a famous Buddhist stupa said to be 2000 years old. Also see Patan (also known as Lalitpur), a city of fine arts, enclosed within 4 stupas built in the 3rd Century AD, by Emperor Ashoka.

Visit Bandipur, a picturesque town nestled in the Himalayan foothills of Nepal, a land as famous for its natural beauty as for the hospitality of its people. Continue to Pokhara, located on the main road between Kathmandu and Bhairahawa. There is no other place in the world from where the peaks of the Himalayas can be admired from such a close distance.

Before returning to Kathmandu, journey to Royal Chitwan National park situated in the foothills of the Churia ranges. Join optional tours such as a jungle safari or a boat ride.

Arrive into Kathmandu. Situated between India and Tibet, is the Kingdom of Nepal, home to Mount Everest and known as the Shangri La of the East. Upon arrival into the airport, you will be met by Goway's representative and transferred to your hotel. Kathmandu is the capital and largest city of Nepal and is rich with temples. The valley has seven World Heritage Sites and the city uniquely blends culture with the modern world. This evening you may wish to explore the popular Thamel area.

This morning visit Swayambhunath, the 2000 year old, world famous Buddhist Stupa also known as the "monkey temple". Its lofty white dome and glittering golden spire are visible for many miles from all sides of the valley. Painted on the four-sided base of the spire are the all-seeing eyes of Lord Buddha. Above each pair of eyes is the 'third eye' signifying the wisdom of looking within. Continue on to Durbar Square, or "meeting place", very much the centre of old Kathmandu. Here you will find a gathering of temples and shrines with intricate carvings, the temple of Kasthamandap, which is believed to be made from the timber of a single tree; the three storied Akash Bhairav (God of the sky) Temple and Hanuman Dhoka, the old royal palace, named after the monkey god. From the entrance gate of the Hanuman Dhoka you will enter the Nasal Chowk. Although the courtyard was constructed in the Malla period, many of the buildings around the square are later Rana constructions. During that time Nasal Chowk was used for coronations, a practice that continues to this day on the coronation platform in the centre of the courtyard. Just by the entrance there is a surprisingly small but beautifully carved doorway, which once led to the Malla King's private quarters. There is a tradition of worshiping young girls as manifestations of the divine female energy or "Devi" in Hindu religious traditions and your tour also includes a visit to the Kumari House (Temple). This afternoon visit Patan City, also known as Lalitpur and one of the oldest Buddhist cities in the world. It is best known for its fine arts and crafts and rich cultural heritage. Here you will see the Durbar Square and UNESCO World Heritage Sites. Your tour ends with a visit to the Tibetan Handicraft Centre where you can witness the hand- weaving techniques used to make Tibetan carpets and the moulding of metal statues. Its main objective is to help the Tibetan refugees by providing them job opportunities.

This morning you will explore Bhadgaon, also known as Bhaktapur, literally translated means "city of devotees". Found in the 9th century and shaped like a conch shell, is the home of medieval art and architecture. Here you can visit the Durbar Square, with its array of temples, and the Palace of 55 Windows. This Palace is the best example of the Pagoda style of architecture and stands on five terraces, on each of which stands a pair of figures - two strong men, two elephants, two lions, two griffins and two goddesses. One of the World Heritage Sites, the Pashupatinath Temple is one of the most sacred Hindu shrines inthe world. The richly ornamented pagoda houses the sacred linga, or phallic symbols, of Lord Shiva. It stands as a symbol of unity bringing the different sects of Hinduism under a single fold and is situated amidst a lush green natural setting on the bank of the sacred Bagmati River. Non-Hindus are not permitted to enter, so for these guests, you will only be able to view the temple from a special vantage point. From here devotees can be seen taking ritual dips in the holy Bagmati river banks. Bagmati is also important because Hindus are cremated on the banks of this holy river. According to the Nepalese Hindu tradition, the dead body must be dipped three times into the Bagmati River before cremation. Before returning to the hotel, you will visit Boudhnath, one of the largest stupas of it's kind in the world. It stands with four pairs of eyes in the four cardinal directions, keeping watch for righteous behavior and human prosperity. It is built on an octagonal base inset with prayer wheels.

Today visit the Manakamana temple situated in the Gorkha district of Nepal. It is the sacred place of the Hindu Goddess Bhagwati, an incarnation of Parvati. The name Manakamana originates from two words, "mana" meaning heart and "kamana" meaning wish. Venerated since the 17th century, it is believed that Goddess Bhagwati grants the wishes of all those who make the pilgrimage to her shrine to worship her. Later this afternoon drive to Bandipur, a picturesque town nestled in the Himalayan foothills of Nepal, a land as famous for its natural beauty as for the hospitality of its people. Here you will get to see the traditional Newari houses, with carved wooden windows and overhanging slate roofs. Overnight in Bandipur. Your overnight stay is basic but is best hotel offered in the region.

This morning you will enjoy a walking tour around Bandipur. This Newar town (people of Nepal) has maintained its age-old flavour and presents sightseers with a mix of history, architecture, incredible views, caves and unspoiled landscapes. Feast your eyes on a spectacular panorama of the entire Annapurna Range plus the peaks of Dhaulagiri, Manaslu and Langtang from here. You will also gain an insight into Newar culture, while enjoying the pristine scenery. This afternoon drive to Pokhara, a remarkable place of natural beauty. Situated at an altitude of 900m from the sea level and 200km west of Kathmandu valley, Pokhara is known as a center of adventure and the starting point for most treks The enchanting town has several beautiful lakes and offers stunning panoramic views of Himalayan peaks. The serenity of lakes and the magnificence of the Himalayas rising behind them create an ambience of peace and magic. Your hotel for the next 2 nights is a heritage type property and considered a deluxe option for its amenities but rather its location and experience.

Your exploration of the area includes Devi's Fall also known as Devin's and David's. Legend has it that a trekker (Devin, David) was washed away by the Pardi Khola and mysteriously disappeared down into an underground passage beneath the fall. Continue to Gupteswore Cave, one of the largest caves in Pokhara dedicated to Lord Shiva is another nature's wonder in Pokhara and Mahendra cave Known as Bat Cave. Your tour ends with a visit to Phewa Lake for a boat ride. Phewa Lake is the second largest lake in the Kingdom. It is the largest and most enchanting of the three lakes that add to the resplendence of Pokhara. The afternoon is at leisure.

Early this morning drive to Chitwan, Nepal's first national park, located in the south-central region of Nepal. Chitwan was established in 1962 by the late King Mahendra as a rhinoceros preserve. Prior to this, Chitwan used to be a favorite hunting ground for Nepal’s ruling class. Today Chitwan is a protected World Heritage Site, praised as one of the most rich wildlife sanctuaries in all of Asia. Arrive and proceed to your resort where the rest of the day is at leisure.

Today is at your leisure to enjoy various jungle activities organized by the resort, such as nature walks, canoeing, jeep safaris, elephant safaris and bird watching. Have lunch and dinner at the hotel.

Enjoy breakfast at the hotel and then continue overland to Kathmandu. Upon arrival, proceed to your hotel. This afternoon is at your leisure to shop or walk around on your own. This evening enjoy a traditional Nepali Dinner.

You will be met and transferred from your hotel to the airport.