MODERATE | ESCORTED COACH TOUR: The very essence of this special country is revealed with stays in its vibrant capital, Tokyo and its historic ancient capital, the beautiful Kyoto. A further stay in Hakone National Park with the nearby Mount Fuji and a day in Hiroshima complete the tour. 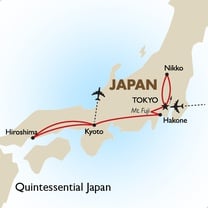 Your Quintessential Japan tour starts off with 3 nights in Japan’s vibrant capital, Tokyo.
Sightseeing includes a full day to Kamakura with its Great Buddha, ancient temple of Hase-Dera, famous for housing a massive wooden statue and the Tsurugaoko Hachimangu Shrine, Kamakura's most important shrine. Return to Tokyo via Yokohama and stop in at the traditional Japanese Sankeien Garden.

The following morning, enjoy a tour of Japan’s largest city which will include the observation deck of the Tokyo Tower, the gardens of the Imperial Palace, the Asakusa Kannon Temple and the traditional Ueno district.

Leave Tokyo by bus for the Hakone National Park and drive half way up the famous Mount Fuji for some spectacular panoramic views. Later, enjoy a cruise on Lake Ashi followed by a scenic ride on the Hakone Ropeway, one of the world’s longest aerial lifts. Overnight in Hakone.
The next day, take the bullet train to Kyoto. On arrival, head to the attractive city of Nara, to view the ancient Todaiji Temple with its Great Buddha, the largest bronze Buddha in Japan, the colourful Kasuga Taisha Shrine with its 3,000 lanterns and visit Nara Park, affectionately called "Deer Park" because of the friendly, free-roaming deer that inhabit it. Return to Kyoto for a 4 night stay.

You will have a full day of touring to some of the most famous sites including Nijo Castle, completed in 1626, the Kyoto Imperial Palace, former home of Japan’s Imperial families and the Golden Pavillion (Kinkakuji Temple), an impressive structure built overlooking a large pond which reflects a mirror image of the temple. You will also visit Sanjusangendo Temple, which has over 1,000 Buddha images and the Heian Jingu Shrine and the Kiyomizudera Temple with its famous wooden verandah.

Next head to Hiroshima for the day by the bullet train. Although widely known as the city destroyed by an atomic bomb in 1945, Hiroshima is now a modern, cosmopolitan city. On arrival, enjoy a tour which includes the beautiful Miyajima Island famous for its Itsukushima Jinja Shrine floating in the water, the Hiroshima Peace Park and the Atomic Bomb Dome, a reminder of World War II and an inspiring symbol of peace.

Another full day at leisure to further explore Kyoto brings to a conclusion your quintessential visit to Japan.

Upon arrival at Narita or Haneda airport, clear immigration and proceed to the arrivals hall, where our representative will greet you and assist you in boarding a taxi to your Tokyo hotel. After check-in, the remainder of the day is at leisure.

Start off your stay in Tokyo with a morning tour. Pass the Imperial Palace which is formerly known as Edo Castle, this palace is the residence of the Emperor of Japan. The grounds are lush with green foliage and provide a relaxing spot for Tokyoites and visitors alike. Then visit Tokyo Tower, an Eiffel tower inspired communication tower. Visit the main deck at 150 m. Next, visit Senso-Ji Temple and Nakamise Shopping Street. Senso-Ji, Tokyo's oldest temple, offers plenty to see including the bright red Kaminarimon Gate, a statue of the god of thunder, and a five-story pagoda. The bustling street known as 'Nakamise' stretches for about 250 m from Kaminarimon Gate to Senso-Ji Temple and is filled with a plethora of shops. The tour ends in Asakusa after enjoying a stroll around. Enjoy your free time in the afternoon.

Tokyo to Nikko to Tokyo

Today take a full day bus excursion to Nikko. Please make your way to the pickup point in Tokyo (details will be provided). Please ensure you have good walking shoes. In Nikko visit Nikko Toshogu Shrine, a UNESCO World Heritage Site famous for its lavish decorations and ornate details. This 400-year-old shrine houses the remains of Edo period's founder, Ieyasu Tokugawa. Enjoy seeing the traditional beauty of the main hall, as well as the sleeping cat and monkey carvings. Thereafter, you will be able to enjoy a Japanese-style lunch. After lunch, you will head over to Lake Chuzenji, created by an eruption of Mt. Nantai, this lake is a symbol of Nikko. You will also see Kegon Falls from the observation deck, known as one of Japan's 3 great waterfalls (should you wish to take the Kegon Falls elevator please pay on the spot as this is not included). The tour will send near Shinjuku Station in Tokyo.

Tokyo to Mt Fuji to Hakone

Depart from Tokyo by bus for Fuji Hakone-Izu National Park in the morning. Your first stop is Mt. Fuji where you will drive half way up the mountain to the 5th station for a spectacular view of the surrounding countryside from a sight 2,300 meters. (When the drive to the 5th Station is closed in winter, due to snow, you will go to the highest possible point.) After lunch (included) take a cruise on the beautiful Lake Ashi followed by a scenic ride on the Mt. Komagatake Ropeway. Arrive at your hotel in Hakone in the evening, where you will overnight. Please note: Please Note: Baggage will be separately transported from Tokyo to your hotel in Kyoto with allowance of 1 piece per person. Some hotels have a terminal for LFT (luggage free travel) if this is the case at your hotel, please take your luggage to the terminal and you will need to input your 6 digit Goway reference/booking number to receive the printed receipt. Please keep this receipt in order to take delivery of your luggage in Kyoto. If the hotel does not offer LFT, please hand your baggage over to the hotel porter indicating you are part of the Sunrise Tour by showing your travel vouchers. For extra luggage, JPY 2,200 will be charged per piece in destination. Please arrange an overnight bag for your stay in Hakone.

Hakone to Kyoto to Nara to Kyoto

Drive to Odawara Station in the morning and take the Shinkansen (bullet train) to Kyoto. Enjoy a western style lunch at a local restaurant, and then go on an afternoon tour to Nara, the first permanent capital of Japan. Visit the ancient Todaiji Temple and its massive Great Buddha (the largest bronze Buddha in Japan). You will also see the colorful Kasuga Taisha Shrine with 3,000 lanterns. This Shinto shrine is considered one of Japan's "Three Great Shrines". Also visit Nara Park, affectionately called "Deer Park" because of the friendly, free-roaming deer that inhabit it. After this you will return to Kyoto in the evening.

Take a full day tour to explore some of Kyoto's most famous sites and discover the history behind this one thousand year capital. Visit Nijo Castle, noted for its gorgeous interiors and its 'squeaky' nightingale floors which alerted residents to unwanted intruders (if Nijo Castle is closed, visit Ryoanji Temple instead). Continue to Kinkakuji Temple, famous for its Golden Pavilion covered entirely in thin layers of pure gold as well as for its exquisite Japanese gardens and koi ponds. Afterwards, visit Kyoto's Imperial Palace and gain exclusive access to the former residence of the Emperor of Japan (if the Palace is closed, visit Kitano Tenmangu Shrine instead). After lunch, visit Fushimi Inari Taisha Shrine to walk through the thousands of ted tori gates that line the hillside. Continue on to Sanjusangendo Temple, home to the world's longest wooden structure which houses over a thousand life-sized statues of Buddhist deities. Finally, proceed to the hilltop temple Kiyomizudera and admire the views of Kyoto from its wooden veranda. You might also want to catch a few drops of the Otowa waterfall which flows underneath the main hall, known to grant wishes to those who drink it.

Kyoto to Hiroshima and Miyjima to Kyoto

Leaving from Kyoto early this morning (select hotels have pick up service) travel to Hiroshima by shinkansen train. The journey takes approximately two hours. Arrive at the JR Hiroshima station and walk to the Granvia Hotel, directly connected to Hiroshima station. First, you will transfer to Miyajimaguchi where you will take a ferry over to beautiful Miyajima Island, an UNESCO World Heritage Site famous for its Itsukushima Jinja Shrine. Here, you will have the opportunity to take in one of the three most renowned views in Japan, especially at high tide when the shrine appears to be floating magically on top of the sea! Break for lunch (not included) and enjoy some time to relax on your own. Continue on to Hiroshima Peace Memorial Park and Museum, dedicated to promoting peace around the world. Walk around and reflect on human history through the poignant portrayals of Hiroshima's darkest hours. See the Atomic Bomb Dome, a sobering reminder of World War II and an inspiring symbol of peace. At the end of the tour take the shinkansen train back to Kyoto station, you will arrive in Kyoto in the evening.

Today is a day at leisure to explore Kyoto on your own.

2022: Departure Dates to be advised