Explore the historic region of the River Kwai on this 3-day journey to the west of Thailand. Staying on a floating raft hotel moored on the banks of the river, you’ll meet Mon villagers, venture to the Bridge on the River Kwai, and learn about the dark and fascinating history of this jungle region. 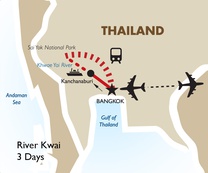 This 3-day Thailand vacation takes you to far western Thailand to visit hill tribes and see the infamous Bridge on the River Kwai.

Your trip to Thailand begins in Bangkok, where you’ll catch a bus travelling to Kanchanaburi and the Bridge on the River Kwai. This black iron bridge was part of Japan’s Death Railway in World War II, linking Thailand with Myanmar (then Burma). Still in use today, the bridge was the target of frequent Allied bombing raids during World War II and was rebuilt after the war ended. Your first stop is the War Museum and the War Cemetery to learn about the effects of World War II on the region before boarding a long-tailed speedboat to reach the Jungle Rafts, a “float-el” with 17 bamboo rafts moored along the historical River Kwai. This incredible accommodation offers you the opportunity to step out of your everyday world into a life that’s at harmony with nature. You can bask in the sun and dive off your verandah to cool off in the river. After lunch, take a boat ride down the river to the Hell Fire Pass Memorial. This pass was one of the most difficult parts of the railroad and was built by forced labourers. Reflect on its dark history before returning to the hotel. After dinner, enjoy a dance performance from the local Mon people.

The next morning, enjoy another boat ride as you head to Saiyoke Yai Waterfall and National Park, where you’ll pass through dense forests and spot numerous birds and land animals. Return back to the hotel for lunch, after which you’ll explore the breathtaking limestone rock formations of the Lava Cave. On your final day on the River Kwai, you’ll visit a local Mon Tribe village to meet with the jungle’s inhabitants and learn about their traditions. Afterwards, you’ll board the Death Railway Train and ride along the infamous railway, following a part of the original track that forced labourers had to build during World War II. After your hour-long train ride, you’ll disembark and head back to Bangkok to continue your onward journey.

Early morning you will be picked-up from major hotel in Bangkok downtown area and arrived in Kanchanaburi. Visit to the Thailand-Burma Railway Centre Museum, War Cemetery and Bridge over the River Kwai. Lunch at local restaurant (food only) and then take a long tail boat from the pier to get to The Float House Rive Kwai, passing by unspoiled mountainous jungle scenery. After that, you will check in at your hotel and visit the nearby ethnic Mon Tribal village. Then, return to hotel and will have dinner (food only), followed by a 45-minute presentation of Mon dances.

After breakfast, take an exciting boat ride upstream to visit Sai Yoke Yai Waterfall and National Park to experience the nature at its best. Then, you will have lunch at a local restaurant (food only). After that, you will visit to Lava Cave to explore the fascinating rock formations inside and have an afternoon relaxation in paradise. You will go back to your hotel to have dinner (food only) and stay the rest of the night.

After breakfast, take an exciting boat ride downstream to Resotel pier and continue to visit the Hellfire Pass Memorial. then you will check out at your hotel and leave for lunch (food only). You will take a historic ride on Death Railway Train, passing lush forest. And, will continue to Bangkok on air-conditioned minivan. After arriving in Bangkok, you will be transferred to your hotels in Bangkok downtown area.

Prices are "from", per person, based on twin/double share accommodation and for travel in low season. Seasonal surcharges and blackout dates will apply, Limited seats/spaces and all pricing is subject to change and availability. Rates for single or triple travellers are available on request -- please inquire.