This tailor-made Suzhou stopover will enhance any trip to China. Taken as a final stop before departure, or as an addition to a Shanghai city break, Suzhou is the ‘Venice of China,’ a beautiful city crossed with canals and dotted with beautiful gardens. 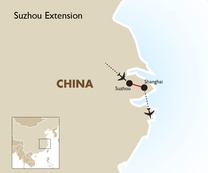 This 3-day visit to Suzhou adds one of China’s most attractive and peaceful cities to your itinerary, and is a quick, easy trip from Shanghai airport.

Check into your hotel and spend what remains of your day wandering one of the few Chinese cities ideally suited to the pedestrian visitor. The following day, meet your English-speaking guide, ready to marvel at the picture-perfect gardens and photogenic canals of this city. Visit the Humble Administrator’s Garden, and enjoy a sampan ride along the Grand Canal. Explore the Suzhou Museum for a 101 on the region, told within a gorgeously designed building, then find your serenity on scenic Tiger Hill, ending your day’s exploration with a stroll down Santang Cultural Street.

On arrival in Suzhou, you will be met at the airport and transferred to your hotel for check in. The rest of the evening is at your leisure.

Today you will explore the Humble Administrator’s Garden followed by a traditional sampan ride on the Grand Canal. The largest of Suzhou's gardens, the Humble Administrator’s Garden dates back to 1513, and the use of water here is quite complex. The creation of multiple vistas and the dividing of spaces into distinct segments are the garden artist's means of expanding the compressed spaces of the estate.

Then, proceed to the Suzhou Museum, which has been a highly-regarded regional museum with a number of significant Chinese cultural relics, designed by world famous architect I.M.Pei.

Thereafter, continue to Tiger Hill (Hu Qiu) which enjoys a reputation as 'the first scenic spot in the State of Wu'. Suzhou was once the capital of the State of Wu during the Spring and Autumn Period. It is where the King of Wu, He Lu, was buried after his death. The area was named Tiger Hill after a tiger was seen lying on the tomb of He Lu.

After stroll along the Santang Cultural Street, transfer back to hotel and evening is at your leisure.

You will be picked up from your hotel and transferred by road to Shanghai airport for your onward journey.