FIRST-CLASS | ESCORTED COACH TOUR: Discover this diverse country with time spent in the capital city of Taipei, touring through the scenic East Coast area including Taitung, visiting iconic Taroko Gorge and soaking in hot springs in Chiaohsi (Yilan). Taiwan will surprise even the most traveled globetoretter with its natural beauty, culture, history and fabulous cuisine. 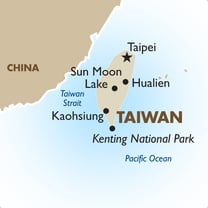 Situated off the east coast of China, Taiwan came of age in 1949 when, as the Republic of China, it separated from Mainland China. It is a country with many natural attributes with a steep mountain chain running from north to south, lush forests, lakes and an abundance of natural beauty. All can be experienced on this itinerary.

Begin your time in Taiwan with 2 nights in its capital, Taipei, a vibrant centre of culture and entertainment. The morning after arrival, travel to Keelung and visit Chung Cheng Park with its large statue of the Goddess of Mercy where you will have panoramic views of Keelung Harbour. Also visit Yehliu with its amazing rock formations. Return to Taipei and have an afternoon tour which includes the National Palace Museum which houses the world's largest collection of Chinese art treasures brought mainly from Mainland China by Chiang Kai-Shek when he fled from there to set up in Taiwan. Also see the Martyr's Shrine, an excellent example of classical Ming dynasty architecture dedicated to the fallen heroes of China's wars and the Chiang Kai-Shek Memorial Hall, an impressive monument to a great Chinese leader. Later visit the Taipei Handicraft Centre.

Depart from Taipei and drive to Puli, an historic town with an amazing monastery. Continue to Sun Moon Lake, the largest natural lake in Taiwan half shaped like the sun and half shaped like the crescent of the moon. While here, enjoy the beauty of the lake and also visit Wen Wu Temple located on the lake and built in 1938, the Peacock Garden which contains 200 peacocks as well as pheasants and the Holy Monk Shrine which contains the remains of a monk from the Tang Dynasty era. Overnight at Sun moon Lake.

The following morning, proceed to Lukang known as a centre for arts and handicrafts, particularly wooden and bamboo items. In earlier times, Lukang was the site of magnificent homes and temples examples of unique Taiwanese architecture. Some of these structures still exist today. Continue to Kaohsiung for 2 nights’ accommodation.

Kaohsiung is a city with a large harbour. It is surrounded by many fascinating landscapes including two of the country’s largest and most beautiful parks. Head south the next morning to Kenting National Park, Taiwan's only tropical national park covering a large area of land and the coast with amazing flora and fauna - it is known as a recreational area and it has exceptional beaches. There are stops at the Eluanbi lighthouse, the Maobitou coastal scenic area and Longpan Park.

The following morning brings a tour of Kaohsiung. First, visit Cheng Ching Lake with its stately Restoration Pagoda. The lake also has islands and bridges, towers and pavilions, boating and aquariums, tree-lined paths and a nine-corner bridge. After this, visit the Spring and Autumn Pavilions and the seven-tiered Dragon and Tiger Pagodas which stand in the water of Lotus Lake. After the city tour, return to Taipei for a further 2 nights.

Fly the next day to Hualien for a visit to the Taraoko National Park which contains the scenic Taroko Gorge with its sheer cliffs, walking trails, waterfalls and pagodas. Explore the area with visits to places such as the Eternal Spring Shrine, Swallow Grotto and the Tunnel of Nine Turns. Also take time to stop at a marble factory. On your return trip to Hualien you will visit Chi Hsing Beach and the Hualien Stone Sculptural Park. Then return to Taipei by train.

The following day is departure from Taipei.

Upon arrival at Taoyuan international airport (TPE), you will be met and transferred to your hotel. The remainder of the day will be free.

Today, you will take early morning express train from Taipei to Hualien, you will then drive to the East Coast National Scenic Area to stop at Shitiping (Terraced Rocks), Sanxiantai, Amis Folk Center until you arrive at Taitung. Stay overnight at Taitung

Visit Taroko National Park which is an exceptionally beautiful, narrow raving created by a river which has cut deep into the mountains of solid marble.

A road carved into sheer walls of rock snakes its way past forested peaks and cliffs towering thousands of feet above it, while hundreds of feet below a river roars past gigantic marble boulders. Stops will be made at Eternal Spring Shrine, Swallow Grotto, passing by Tunnel of Nine Turns, Cihmu Bridge, Tienshiang, Qingshui Cliff.

You will then drive to Chiahsi for overnight stay and enjoy the natural hot spring bath.

After breakfast, you have a morning tour of Taipei city that includes the impressive Chiang Kai-Shek Memorial Hall, the world-famous National Palace Museum where 5,000 years of Chinese imperial arts and jade collections are exhibited, the Martyrs' Shrine, a stop by The Grand Hotel Taipei to take a photo, and then pray for good luck in Hsin Tian Kong at Xingtian Temple. In the afternoon, continue with a tour to Northeast Coast. Drive past the Bay of Two Colors, visit Nanya Rock Formations, Jiufen Village and stop by Jinguashi - The Remains of the 13 Levels for a photo.

At leisure until the time for hotel check out and transfer to the airport for departure flight.

This tour can also be offered on a private basis. If interested, please inquire with your Goway destination specialist.