MODERATE | ESCORTED COACH TOUR: Literally a tale of two contrasting Japanese cities, modern and sophisticated Tokyo and traditional and historical Kyoto. Travelling between these two fascinating metropolises, this trip to Japan tours to Mount Fuji and the Hakone National Park. You'll also enjoy a ride on a bullet train. 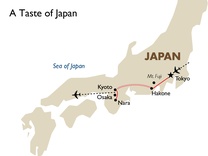 Start your Taste of Japan itinerary in Tokyo, Japan’s sprawling, busy capital, which offers a mix of the ultramodern and the traditional. It has been the capital of Japan since 1868 when it moved from Kyoto. The city is made up of a number of districts, each one with its own character and attractions. In order to become familiar with Tokyo during your 2 nights here, a tour will include the Tokyo Tower with its observation deck offering excellent views of the city, the Imperial Palace Plaza outside the Emperor’s Palace to visit the beautiful gardens and the traditional Asakusa Kannon Temple and Nakamise Shopping Arcade. Later, drive through the old Ueno area which offers a glimpse of what old Tokyo would have looked like without the high rises and the neon of the shopping arcades.

Leave Tokyo and travel by bus to the Hakone National Park On arrival, drive halfway up Mount Fuji to the 5th Station for a spectacular view of the surrounding countryside. Later, enjoy a cruise on the beautiful Lake Ashi followed by a scenic ride on the Hakone Ropeway, one of the world's longest aerial lifts. You will be dropped off at the Odawara station where you board the bullet train to Kyoto for a 3-night stay.

Kyoto was the capital of Japan for over 1000 years before Tokyo became its capital. It is Japan’s most beautiful city with a rich cultural heritage and remains a highlight of many Japan tours. Arriving initially in Kyoto, one’s first impression is that of a modern metropolis which is in parts. However, it doesn’t take long to unearth the infinite number of cultural treasures which are spread out all over the city.

A morning tour will introduce you to some of Kyoto's most famous attractions. These include the Kinkakuji Temple which is famous for both its Golden Pavillion and its exquisite Japanese garden and the impressive Nijo Castle which is noted for its interiors. This is the Kyoto residence of the Tokugawa Shogun and its main keep dates all the way back to 1603.

In the afternoon, head to Nara, the first permanent capital of Japan. Visit the ancient Todaiji Temple and its massive Great Buddha which is the largest bronze Buddha in Japan. You will also visit the colourful Kasuga Taisha Shrine with its 3000 lanterns. This Shinto shrine is considered one of Japan's "Three Great Shrines". Finally finish with a visit to Nara Park known as "Deer Park" because of the friendly, free-roaming deer that inhabit it. Return later to Kyoto.

A further day is at leisure to explore the fascinating treasures of this fabulous city.

Upon arrival at Narita or Haneda airport, clear immigration and proceed to the arrivals hall, where our representative will greet you and assist you in boarding a taxi to your Tokyo hotel. After check-in, the remainder of the day is at leisure.

Start off your stay in Tokyo with a morning tour. Pass the Imperial Palace which is formerly known as Edo Castle, this palace is the residence of the Emperor of Japan. The grounds are lush with green foliage and provide a relaxing spot for Tokyoites and visitors alike. Then visit Tokyo Tower, an Eiffel tower inspired communication tower. Visit the main deck at 150 m. Next, visit Senso-Ji Temple and Nakamise Shopping Street. Senso-Ji, Tokyo's oldest temple, offers plenty to see including the bright red Kaminarimon Gate, a statue of the god of thunder, and a five-story pagoda. The bustling street known as 'Nakamise' stretches for about 250 m from Kaminarimon Gate to Senso-Ji Temple and is filled with a plethora of shops. The tour ends in Asakusa after enjoying a stroll around. Enjoy free time in the afternoon.

Tokyo to Mt Fuji to Hakone to Kyoto

Depart from Tokyo by bus for Fuji Hakone-Izu National Park in the morning. Your first stop is Mt. Fuji where you will drive half way up the mountain to the 5th station for a spectacular view of the surrounding countryside from a sight 2,300 meters. (When the drive to the 5th Station is closed in winter, due to snow, you will go to the highest possible point.) After lunch (included) take a cruise on the beautiful Lake Ashi followed by a scenic ride on the Mt. Komagatake Ropeway. After the tour, drop off at Odawara station to take the shinkansen (bullet train) to Kyoto. You will arrive in Kyoto late this evening.

Please Note: Baggage will be separately transported from Tokyo to your hotel in Kyoto with allowance of 1 piece per person. Some hotels have a terminal for LFT (luggage free travel) if this is the case at your hotel, please take your luggage to the terminal and you will need to input your 6 digit Goway reference/booking number to receive the printed receipt. Please keep this receipt in order to take delivery of your luggage in Kyoto. If the hotel does not offer LFT, please hand your baggage over to the hotel porter indicating you are part of the Sunrise Tour by showing your travel vouchers. For extra luggage, JPY 2,200 will be charged per piece in destination. Please arrange an overnight bag for your first night in Kyoto.

Kyoto to Nara to Kyoto

Take a full day tour to explore some of Kyoto's and Nara's most famous sites. Spend the morning in Kyoto. Visit Nijo Castle, noted for its gorgeous interiors and its 'squeaky' nightingale floors which alerted residents to unwanted intruders (if Nijo Castle is closed, visit Ryoanji Temple instead). Continue to Kinkakuji Temple, famous for its Golden Pavilion covered entirely in thin layers of pure gold as well as for its exquisite Japanese gardens and koi ponds. Afterwards, visit Kyoto's Imperial Palace and gain exclusive access to the former residence of the Emperor of Japan (if the Palace is closed, visit Kitano Tenmangu Shrine instead). After lunch travel to Nara, the first permanent capital of Japan. Visit the ancient Todaiji Temple and its massive Great Buddha (the largest bronze Buddha in Japan). You will also see the colorful Kasuga Taisha Shrine with 3,000 lanterns. This Shinto shrine is considered one of Japan's "Three Great Shrines". Also visit Nara Park, affectionately called "Deer Park" because of the friendly, free-roaming deer that inhabit it. After this you will return to Kyoto in the evening.

Today is a day at leisure to explore Kyoto on your own.

Prices are "from" per person based on twin/double share accommodation and for travel in the low season. Seasonal surcharges and blackout dates may apply. Limited seat/spaces and all pricing is subject to change and availability. Rates for single or triple travellers are available on request - please enquire.