DELUXE | RAIL: Travel the legendary Trans-Siberian Railroad through Russia, Mongolia and China in comfort. Dramatic changes in landscape and culture abound as you traverse both Europe and Asia on this exclusive train. It's time to check one off the bucket list. 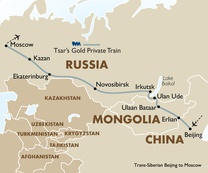 The train journey from Beijing into Mongolia, across Siberia and finishing in Moscow is one of the most epic of itineraries linking two very large countries. This journey aboard a very comfortable train covers almost 8000 kilometres/5000 miles all in two weeks travelling through six time zones and ever changing landscapes. The trip will expose you to several different cultures and a myriad of exciting and unusual landscapes and all this while relaxing in your compartment or the observation/day car.

Your journey by train departs from Beijing travelling to Mongolia. Before arriving in Mongolia, the vast and expansive Gobi Desert is another highlight.

On arriving in Mongolia, you have an overnight stay in Ulaanbaatar, a city which combines the traditional and modern. However, the main impression one gets is of a city lost in time. Cows roam the streets and many locals still dress in traditional garb. All this will be seen on a tour of the city. After an overnight in Ulanbaatar, visit the Gandan Monastery after which, head out into the countryside to the Mongolian Alps where you will meet nomadic herdsmen and enjoy a demonstration of horsemanship and traditional wrestling.

Depart from Mongolia and cross into Russia where the train stops in Ulan Ude, an old town in Eastern Siberia. There is time to stroll around the town or take a guided tour.

Next stop is Lake Baikal, the oldest and deepest freshwater lake in the world, rich in biodiversity with more than 1000 plants and more than 1500 different animals existing in the area. Enjoy a cruise and a picnic on its shores. After that, stop in Irkutsk, an attractive city in Siberia with wide streets, ornate architecture and many museums. It has been described as “The Paris of Siberia”. Overnight in Irkutsk

Continue next to Novosibirsk, the third largest city and an important industrial centre after which stop at Ekaterinburg, the fourth largest city in Russia. The final en route stop is at Kazan, a University City and home to the Tartar population (a religion and culture which is a blend of Muslim and Christian faiths).

Complete your train journey at Moscow where you will stay for 1 night at a local hotel. Here the highlights include Red Square, the Kremlin which is an ancient fortress containing the seat of the Russian parliament and St. Basil’s Cathedral. Also travel on the Moscow subway where the station platforms are miniature art galleries and/or museums.

You will have undertaken an amazing journey and an exceptional experience!

Friendly and knowledgeable travel guides await you at the airport to take you to your first class hotel in the centre of town. After a brief rest the itinerary starts off with a tour of Beijing. Highlights include Beijing's most stunning sights: the Temple of Heaven as well as the famous Tiananmen Square. The day concludes in a relaxed manner with drinks and dinner.

The Great Wall of China is the 8th Wonder of the World; this is your chance to experience it up close. On your way there you stop at a pearl farm as well as at the famous Ming Tombs (a UNESCO World Heritage Site) and the Sacred Way, a boulevard lined with carved stone animals. Wrapping up the day is a feast featuring what is surely the world's best-known Chinese delicacy, Peking Duck, at one of China's most famous theme restaurants.

Forbidden City and Departure for Mongolia

For centuries the doors to the former Emperor's Palaces have been closed to the public. Today the glorious halls and mysterious temples of the Forbidden City are open for you. In the evening, the rail part of the journey begins. A modern Chinese train will pull out from Beijing's station, en route to Mongolia, a 16-hour trip. Meanwhile, China's busy rural life unfolds outside your window: people working in the fields, donkey-drawn carts on dusty roads, and the great steps of the Gobi desert.

At noon you arrive at the Chinese-Mongolian border and change to your Private Train the Tsar's Gold. Formalities are easily dispatched in your compartment. In Erlian you can explore the colourful border market. Afterwards, your Private Train takes you through the vast expanse of the Gobi desert, then through the great green steppes of Mongolia.

In the morning you arrive in the Mongolian capital Ulan Bataar. Major luggage can be left on the train while you check into the centrally located moderate hotel and then enjoy a tour of the city. You will see the Choijin Lama temple; at night you will have the unique opportunity to watch traditional Mongolian music performances.

Gandan Monastery and the Mongolian Alps

After breakfast you will visit the Buddhist Gandan Monastery and undertake an excursion to a mountainous area with stunning rock formations, known as the Mongolian Alps (about 90 minutes east of Ulan Bataar). Along the way, an open-air railroad museum puts the Mongolian railway into context. A picnic lunch in a yurt is followed by a demonstration of Mongolian horsemanship and the traditional wrestling match. Try some lamb in milk, a culinary specialty of Mongolia. Or, for the brave of heart, there's always kumys (fermented mare's milk), the beer of the nomads.

Bid farewell to the Mongolian steppes as the train rolls on through the valley of Selenga, the largest river of Mongolia. In Ulan Ude your train joins the main route of the Trans Siberian Railroad. Here you can stroll through the city streets or join the guided tour of the city.

The entire day is dedicated to Lake Baikal. Before noon you will arrive at the old station of Port Baikal, located directly on the shore. During two long photo stops on the ancient tracks running parallel to the shore you will have the chance to capture the beauty of the lake on film and explore the wonderful scenery. Take a moment to have a dip in the lake or visit a picturesque Baikal village. You will also enjoy a short boat ride on the lake. If the night is warm, your dinner will be served as a picnic on the shores of the spectacular lake before re-boarding the train.

In the morning you will check into a centrally located moderate hotel in Irkutsk. You can safely leave your bags on the train. A tour of the city includes the lively market hall, the drama theatre and a rather spectacular oddity, a newly erected statue of the Tsar. The afternoon features an excursion to an open-air museum displaying Siberian life in the old days. Spend the night at your centrally located hotel in Irkutsk.

After breakfast the train takes you through the landscapes of Eastern Siberia with its mountains, crystal-clear rivers and verdant slopes. On board of the train you enjoy entertaining lectures about Siberia. A social get-together complete with caviar and vodka tasting makes you familiar with Russian hospitality.

At noon you pull into Novosibirsk, Siberia's biggest city, and are greeted in the traditional Russian way: with bread, salt and balalaika music. Your city tour includes a visit of the Trans Siberian monument and the mighty Ob River. After dinner, the train continues its ride westwards.

In the afternoon the train stops in Yekaterinburg, the capital of the Ural Mountains and the border between Asia and Europe, where you enjoy a short tour of the city centre which was just restored in 2009. In the course of the city tour you will see the newly erected Cathedral-on-the-Blood, built in memorial of that tragic historical event. From now on your train is on European ground.

After breakfast you arrive in Kazan, the old Tartar capital on the banks of the Volga. There is plenty of history here: on a guided tour of the Kremlin you will learn about the wild and often bloody relations of the Tartars, Cossacks, and Russians. The evening offers you one last chance to be pampered in the onboard restaurant.

Before noon you arrive in Moscow, Russia's capital and one of the world's richest and most dynamic cities. After the long rail journey, your first class hotel offers comfort and convenience. At noon, your first stop is the Kremlin with its glorious cathedrals. You can also check out the interiors of some of the buildings. After dinner you go on a magical evening trip through the city. This special tour includes a stop at Red Square as well as a subway ride with a visit of two beautiful old stations.

Tour of Moscow and Depart Moscow

After a savoury breakfast at your hotel you go on a guided tour of Moscow to see the reconstructed Cathedral of Christ the Saviour, Lomonossov University, the New Virgin Monastery, and Red Square with its colourful St. Basil's Cathedral, but also the notorious former KGB headquarters and the White House. Bid your fantastic journey farewell before your departure to the airport.