Explore two countries with startling contrasts and countless treasures. Energetic cities, tranquil villages, ancient capitals, aromatic street food, and beautiful natural settings all make up part of the experience in Cambodia and Vietnam. From Hanoi to Siem Reap, see the best of Indochina on this unforgettable trip. 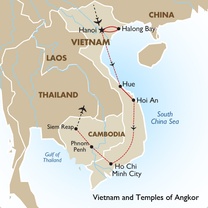 This 15-day trip explores the top sights of Vietnam and Cambodia, taking you on a journey through one of the most diverse, beautiful, and resilient regions of Asia.

Vietnam’s graceful capital of Hanoi is a brilliant place to begin your journey. Take a walking tour of the Old Quarter to get a real sense of Hanoi. Visit the former home of Ho Chi Minh,  One Pillar Pagoda, the 11th century Temple of Literature where graduating classes still celebrate today, and the infamous 'Hanoi Hilton' prison for a very different version of the Vietnam War narrative. Much of Hanoi's joy lies in simply exploring the city on its own terms, so watch for traffic and enjoy the rush and charm of Vietnam's capital.

Four hours drive from Hanoi, visit Ha Long Bay, a UNESCO world heritage site, and a natural wonder of the world, consisting of some 1600 islands in a series of bays, most of which are uninhabited. Enjoy an overnight cruise, during which you will explore the islands, discover floating villages, and see peaks with panoramic views of the area, lagoons, caves and excellent sandy beaches. Return to Hanoi for your onward journey.

Fly the next day to Hue, the former capital of Vietnam, located on the enigmatically named Perfume River. VisitThien Mu Pagoda, and the impressive burial grounds of former Emperors and the Citadel modeled on the Beijing Imperial Palace. Drive the following morning to Hoi An, a UNESCO world heritage site. This historical port offers a maze of interesting narrow streets and alleyways in its old town. Take a walking tour to see its many galleries, tailor shops and cafes, and take the next day to explore on your own.

Take a trip to the Mekong Delta, where the mighty Mekong River empties into the South China Sea. This is the 'rice basket' of Vietnam, where te villages are generally only reached by river or canal rather than by road. A boat cruise will take you to a number of typical delta villages, introducing you to the lifestyles of the local people.

Your visit to Phnom Penh begins at the sobering Tuol Sleng Museum, a former prison in which thousands of Cambodians languishd prior to being murdered by the Khmer Rouge. That history continues at the infamous Killing Fields, just outside of the city. This is a grim part of the tour, but it's essential for understanding Cambodia as it is today. Then go on to Phnom Penh's Royal Palace, noted for its gold leafed roofs and the beautiful Silver Pagoda, often considered the highlight.

The following morning, fly to Siem Reap, the gateway to Angkor Wat. Start today with a visit to the communities of Tonle Sap, the largest freshwater lake/river combination in the country. It is unique as the direction of the flow of water reverses itself twice a year. It is also home to ethnic Vietnamese and Cham people who live most often in floating villages earning their existence through fishing. There over 300 different species of fish in the lake.

The next day, visit the amazing Angkor Archeological Park. Start by evading the crowds for an unspoiled dawn view of Angkor Wat at the little used Eastern Gate. This enormous temple complex signifed the centre of the Khmer Empire, and remains in use today, making it the world's largest active religious building. After some time to explore - and a Khmer breakfast - visit Angkor Thom, the capital city of the Khmer Empire. Here you will see the Terrace of the Elephants and the Terrace of the Leper King, along with Ta Prohm a temple complex still covered with plant life. One final highlight is Banteay Srei, the Citadel of Women, famous for its elaborate decorative wall carvings that archaeologists believe could only have been carved by women at the time.

The quality of accommodation is a real highlight of this trip. Hotels are usually centrally located, three and four-star with private, western style bathrooms and air-conditioning. All road travel is in comfortable minibuses or mid-sized coaches. Your journey is escorted by both a Western tour leader, based on a minimum of seven travellers, and a local English-speaking guide in each location. Groups are never more than 16 travellers in size.

On arrival in Hanoi, transfer to your hotel and enjoy free time until your Vietnam tour briefing. Overnight at Tirant Hotel

Drive from Hanoi to Halong Bay and cruise the bay. Enjoy a delicious seafood lunch before stopping to explore an enormous grotto. Overnight on Indochina Sails boat

After brunch on board, disembark and drive to Hanoi. In the afternoon, visit a market, try some
delicious local snacks and drink beer local-style at a 'Bia Hoi' establishment. Stay the next two nights at Tirant Hotel.

On a city tour, discover the Hanoi Hilton prison, walk through the Old Quarter and visit the Temple of Literature. In the afternoon, explore the Presidential Palace, One Pillar Pagoda and House on Stilts.

Travel like the locals on the Reunification Express from Hue to Danang and take in some of Vietnam's most beautiful coastal scenery before driving to Hoi An. Join the students of Streets Café on a food focused walking tour. In the afternoon, visit some of Hoi An's main sites on a walking tour. Stay the next two nights at Hoi An Garden Palace.

Spend a free day in Hoi An.

Hoi An to Saigon

Enjoy free time in Hoi An before driving to Danang and flying to Saigon. Relax with a drink at the iconic rooftop bar, Saigon Saigon, the perfect end to the day. Stay the next three nights at Grand Hotel Saigon.

Drive to Cu Chi and discover the network of underground tunnels before enjoying a bowl of Pho at a
local restaurant. Take a walking tour of Saigon's city centre.

Board a speedboat from Saigon to the Mekong Delta. Travelling this way allows you to explore areas
of the Mekong that few travelers get to experience. Spend time exploring the palm-fringed canals,
visit local temples and markets, and enjoy a traditional lunch. Return to Saigon and join your group for dinner.

Fly from Saigon to Phnom Penh. On arrival, transfer to your hotel and enjoy free time until
your Cambodia tour briefing. Stay the next two nights at Sunway Hotel.

Begin your day with a fun cyclo ride to the Central Market. Learn about Cambodia's chilling history at Tuol Sleng Museum and the Killing Fields memorial at Choeng Ek. In the afternoon, see the Royal Palace and Silver Pagoda before relaxing with sunset drinks.

Fly from Phnom Penh to Siem Reap and drive to Tonle Sap Lake. Explore the lake by boat and see the floating villages. Return to Siem Reap for a free afternoon. Stay the next two nights at Somadevi Angkor Hotel &amp; Spa.

Take a tuk-tuk to Angkor Wat's seldom-used East Gate entrance and explore the temple. After sunrise, enter the Angkor Thom complex by the little-visited West Gate. Spend time at Bayon temple and see the Terraces of the Elephant and Leper King. Return to the hotel before travelling to Banteay Srei temple and Ta Prohm temple. This evening, enjoy a farewell group dinner.

Note: It is compulsory to have comprehensive travel insurance on this itinerary (additional charge).