Discover Vietnam’s fascinating culture, turbulent and inspiring history, and scrumptious food with a thorough exploration of this enticing country. This trip is for travellers who want to see the highlights of Vietnam, but also want to go deeper, visiting some less travelled national parks and sights. 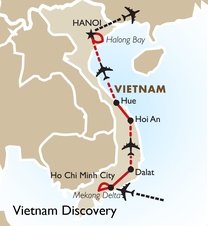 This 17-day small group trip takes you through one of Asia’s brightest travel stars from energetic Saigon to serene Ha Long Bay.

Ho Chi Minh City, still known to the locals as Saigon is at once frantic and enchanting. In Vietnam’s largest city, every sight is a treasure trove of history, every road ‘rule’ governing the ever moving sea of motorbikes is a mere guideline, and every café and restaurant is ready to charge your senses in one of the world’s great food (and coffee) destinations. Get a different slant on the ‘American War’ at the War Remnants Museum or drive your hardest bargain at Ben Thanh Market.

Ho Chi Minh City is also a base for some excellent day trips. Jjourney out on your first day to the Cu Chi Tunnels for a close look at guerilla warfare, Viet Cong style. You'll also spend a day in the Mekong Delta. The food basket of Vietnam, the Mekong produces more than half the country’s rice and supports a large fishing industry. You’ll explore by boat, meeting some of the friendly locals and getting a taste of life in this unique region.

Onward to Dalat, visit a Zen monastery and ride the restoration of the original French train here. From there, fly on to Danang, gateway to Hue and Hoi An, two of Vietnam’s most beautiful cities. Hue is the former capital, and despite suffering considerable damage in the Vietnam War, still contains spectacular remnants of the Nguyen Dynasty such as the Imperial City and Mu Pagoda. Not far away is Hoi An, which has somewhat overshadowed its neighbour as one of old Southeast Asia’s best preserved trading ports. Much of the architecture here reflects that history, so it can often feel more ‘authentic’ than in other parts of the country. Visit the tomb of Nguyen Dynasty Emperor Tu Duc, before a city and market tour lets you sample the best of Hoi An.

To the north of Hue, visit Phong Nha, one of Vietnam's most beautiful national parks. Kayak among the limestone karsks, and explore the aptly named Paradise Cave. It's enough to whet your appetite for flying into Hanoi, bound for Ha Long Bay, Vietnam’s most astonishing natural wonder. Meaning ‘the Bay of Descending Dragons,’ Ha Long contains 1,969 islands and limestone islets. Spend the morning cruising through the bay before returning to Hanoi for a water puppet performance.

Vietnam’s charming capital has earned its reputation as a favourite of many travellers. A walking tour takes you through the Old Quarter, Ba Dinh Square and the Temple of Literature, home to Vietnam’s first national university. You’ll even visit what remains of Hoa Lo Prison (aka the ‘Hanoi Hilton’) and enjoy time at leisure before you depart.

On arrival in Saigon, transfer to your hotel and enjoy free time until your tour briefing. Stay the next two nights at Grand Hotel Saigon (or similar).

Drive to Cu Chi to discover the underground tunnels. Return to Saigon and enjoy a bowl of Pho noodle soup at a traditional restaurant. In the afternoon, take a walking tour along Dong Khoi Street, see the Notre Dame Cathedral and visit the War Remnants Museum. As the sun sets, relax with sundowner drinks at the iconic rooftop bar, Saigon Saigon.

From Saigon, travel south to the Mekong Delta and board your overnight cruise boat, Mekong Eyes. On a walking tour through a rural village, gain a glimpse into local life before returning to the boat for sunset and dinner. Overnight on Mekong Eyes boat (or similar).

Continue exploring the tributaries and canals of the Mekong Delta. Marvel at the vibrant scenes of an authentic floating market before returning to Saigon. Overnight at Palace Hotel (or similar).

An early flight takes you to Dalat, a former French hill station. Enjoy beautiful mountain scenery on the drive to a Zen monastery which features a delightful garden. Take a train ride on a restored French train before ending the day exploring the central market. Overnight at Saigon Dalat Hotel (or similar).

Dalat to Hoi An

Fly from Dalat to Danang, then drive to Hoi An. The evening is free for you to explore Hoi An or you may wish to take part in an optional cooking class. Stay the next three nights at Hoi An Historic Hotel (or similar).

Explore the old town on a morning walking tour. Visit a traditional ancient house, a Chinese Assembly Hall and the Japanese Covered Bridge. Spend the remainder of the day at leisure. The next day, enjoy a full free day to do as much or as little as you like in Hoi An.

Hoi An to Hue

Enjoy more free time in Hoi An before travelling along Hai Van Pass to Hue. Drive to a nearby village and spend the evening sampling regional dishes within a family home. Stay the next two nights at Hotel Saigon Morin (or similar).

Embark on a tour of some of Hue's most famous sites. Visit Spiral Foundation which employs people with disabilities and enjoy making a souvenir.

Drive to Hue across the Demilitarised Zone (DMZ) at River Hai. Continue to Phong Nha Ke Bang National Park and cruise through some of Asia's oldest limestone karst mountains. Stay the next two nights at Chay Lap Farmstay (or similar).

Enjoy a free day exploring the national park at your leisure. Kayak among the limestone karsts or explore the cave system of Paradise Cave.

Travel from Phong Nha to Dong Hai before flying to Hanoi. In the afternoon, visit a market and sample delicious local snacks in the Old Quarter. Stay the next two nights at Tirant Hotel (or similar).

On a city tour, visit the Hanoi Hilton prison, walk through the Old Quarter and stop at the Temple of Literature. Visit the Presidential Palace, One Pillar Pagoda and House on Stilts.

Drive to Halong Bay and board your junk boat. Feast on fresh seafood before exploring an enormous grotto. Overnight on Indochina Sails boat (or similar).

Rise early to make the most of Halong Bay. Enjoy brunch before returning to Hanoi. This evening, relax with a farewell group dinner. Overnight at Tirant Hotel (or similar).