Gain a deeper understanding of magical Vietnam with a more in depth journey through its historic highlights. Experience the busy streets of Hanoi and Saigon, pus the tranquil farmhouses of the Mekong Delta, the ancient towns of Hoi An and Hue, and be the serene beauty of misty Halong Bay. 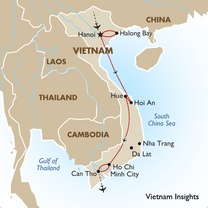 This 11-day journey is ideal for Vietnam first timers, but also takes the time to reveal sides of the country's most popular stops that other travellers might miss. Visit beautiful Ha Long Bay and Hanoi, Hoi and and Hue, and feel the rush of Ho Chi Minh City on this memorable journey.

Land in Hanoi and take a night to shake off the jetlag and adjust to Vietnam. Consider booking an extra day to explore the city on your own terms - it's a fun place to simply get lost before you join your small group. Four hours drive away, visit Ha Long Bay, a UNESCO world heritage site, and a natural wonder of the world, consisting of some 1600 islands in a series of bays, most of which are uninhabited. Enjoy an overnight cruise, during which you will explore the islands, discover floating villages, and see peaks with panoramic views of the area, lagoons, caves and excellent sandy beaches. You'll even take part in a sunrise tai chi lesson, if you so desire.

Returning to Hanoi, it's time for a walking tour of the Old Quarter. Visit the former home of Ho Chi Minh, One Pillar Pagoda, the 11th century Temple of Literature where graduating classes still celebrate today, and the infamous 'Hanoi Hilton' prison for a very different version of the Vietnam War narrative. Much of Hanoi's joy lies in simply exploring the city on its own terms, so watch for traffic and enjoy the rush and charm of Vietnam's capital.

Fly the next day to Hue, the former capital of Vietnam, located on the enigmatically named Perfume River. Visit Thien Mu Pagoda, and the impressive burial grounds of former Emperors and the Citadel modeled on the Beijing Imperial Palace. Drive the following morning to Hoi An, a UNESCO world heritage site. This historical port offers a maze of interesting narrow streets and alleyways in its old town. Take a walking tour to see its many galleries, tailor shops and cafes, and take the next day to explore on your own.

Take a trip to the Mekong Delta, where the mighty Mekong River empties into the South China Sea. This is the 'rice basket' of Vietnam, where te villages are generally only reached by river or canal rather than by road. A boat cruise will take you to a number of typical delta villages, introducing you to the lifestyles of the local people.

On arrival in Hanoi, transfer to your hotel and enjoy free time until your tour briefing.

Drive past scenes of traditional rural life as you travel from Hanoi to Halong City, the gateway to Halong Bay. On arrival, board a well-appointed junk boat and begin cruising among some of the 3,000 islands which rise from the sea. Enjoy a delicious seafood lunch before stopping to explore an enormous grotto. In the evening, retreat to your private cabin, or relax on the main deck or at the bar.

Take part in a sunrise Tai Chi lesson on the sundeck then climb to the summit of an island for 360 degree views of Halong Bay. After brunch on board, disembark and drive to Hanoi. In the afternoon, wander through the backstreets of Hanoi's bustling Old Quarter and sample delicious local snacks including a Vietnamese pancake, sweet tea 'che', shrimp cake and drink beer local-style at a 'Bia Hoi' establishment.

On a city tour, discover Hanoi's must-visit sites including the infamous Hanoi Hilton prison. Walk through the crowded streets of the Old Quarter and visit the Temple of Literature. In the afternoon, explore the Presidential Palace, One Pillar Pagoda and House on Stilts in the Ho Chi Minh Quarter.

Fly to the former imperial capital of Hue, situated on the banks of the Perfume River. Visit the city's sites including Emperor Tu Duc's elaborate tomb, Imperial Palace, Citadel and Thien Mu Pagoda - Hue's oldest and most revered religious monument.

Travel by train as the locals do from Hue to Danang on the Reunification Express and take in some of Vietnam's most stunning coast and mountain scenery. From Danang, drive a short distance to Hoi An. Meet the students from Streets Café, an organisation which was established to help disadvantaged youth gain skills in the hospitality industry. Join the students on a special food focussed walking tour while helping them practise their English-speaking skills. In the afternoon, visit some of Hoi An's main sites including the Japanese Covered Bridge on a walking tour.

Spend a free day exploring Hoi An independently. Wander through the old town, have a tailor create a new wardrobe or cycle to An Bang Beach.

Hoi An to Saigon

There's more free time to enjoy Hoi An and perhaps get those final alterations to your new tailored clothes before transferring to the airport for your flight to Ho Chi Minh City. A city of extraordinary energy, Ho Chi Minh City or Saigon as many locals still prefer to call it, is Vietnam's largest city and the country's commercial capital. Nowhere is Vietnam's rush to modernise more visible than in Saigon, yet despite this, the city is a friendly and welcoming place whilst still containing many reminders of its recent turbulent past.
After checking-in to your centrally located hotel, there's no better start Saigon than with a beer or cocktail in hand, as you watch the sun set over this historic city, looking down at the whirl of traffic below, from one of the city's many hidden rooftop bars favoured by your Tour Leader or local guide. The remainder of your evening is at your leisure to explore this vibrant city.

From Saigon, drive to the Cu Chi tunnels and discover the network of underground tunnels while learning about their role in the Vietnam War. On returning to Saigon, enjoy a bowl of traditional Pho at a local restaurant for lunch then explore the city centre on a walking tour. Wander along Dong Khoi Street which is lined with French-colonial buildings, see the Notre Dame Cathedral and Ho Chi Minh Square before visiting the War Remnants Museum.

Board a speedboat for a scenic trip from Saigon to the Mekong Delta. Travelling this way allows you to explore areas of the Mekong that few travellers get to experience. Spend time exploring the palm-fringed canals and tributaries, and visit some local temples and markets. Enjoy a delicious traditional lunch made using fresh local ingredients. Return to Saigon and join your group for a farewell dinner.