FIRST-CLASS | TAILOR-MADE: Get to the heart of Sydney as you surf, bike, and venture to some of Sydney’s most iconic sites. Climb Sydney’s Harbour Bridge at twilight before you head to Tasmania to venture on a 4 day hike on stunning Maria Island. This trips caters to guests who can walk 10-15 km a day carrying light daypacks of 5-8kg 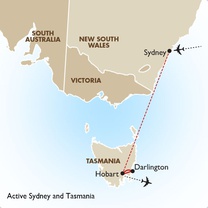 This 9-day Australian vacation gets you up and moving in Sydney and the island state of Tasmania. It features first-class accommodations and small group tours

Your active adventure across Australia begins in Sydney, the nation’s largest city and home to one of the most famous harbours in the world. Get in touch with one of Sydney’s greatest traditions at the surfer haven Bondi Beach. Go behind the scenes of the oldest surfing club in Australia and hike the coastline before learning to surf on the famous beach itself. Another day, head on a cycling tour through the city to stay active while seeing some of its highlights, including the Sydney Opera House, the Harbour Bridge, the Royal Botanic Gardens, and the Art Gallery of NSW. Close out the day with a BridgeClimb experience, scaling the famous metal structure of the Sydney Harbour Bridge to enjoy the best views of the city at twilight.

Fly south to Hobart on the island of Tasmania and ride a catamaran to Maria Island, where you’ll spend several days hiking and exploring some of the most beautiful beaches in Australia. Over the next few days, you’ll skirt pristine bays, discover ochre rocks, hike through thick forest, and see rare birds, including the spotted pardalotes, in the wild. You’ll also have the chance to see the famous Painted Cliffs, known for their psychedelic colours, or climb Mt. Maria for the best views of the island and the surrounding sea. After days of hiking, visit the settlement of Darlington and learn about its convict history before returning to Hobart for another night.

At the end of your stay, connect to the airport for onward travels.

On arrival at Sydney Airport, you will be met and transferred to your hotel.

The balance of the day is at leisure to relax and enjoy before beginning your exploration of the largest city in Australia.

Discover why Bondi Beach is such an important part of Sydney's beach and coastal life-style, the home of surf lifesaving and the famous Bondi lifesaver. Fun, interactive and informative your relaxed guided walking tour allows you spend time with a true blue Bondi lifesaver and learn all about the colourful history of Bondi and how surf lifesaving began.

Take an exclusive tour inside Australia's oldest surf lifesaving clubs and have your photo taken with a Bondi Lifesaver on Bondi's golden sand. Finish up with a guided walk along Bondi's famous coastal headland and discover aboriginal rock carvings, spot marine life and the best viewing points of Bondi and surrounding beaches.

What better place to learn to surf than on world famous Bondi Beach? This popular beginner course teaches you how to safely get out and up onto your first wave. Here you'll be taught in a small group setting of 6 students or less, so you get plenty of hands-on help. To build up your knowledge and confidence, you first start you out on the beach and learn how to recognize surf conditions and practice your surfing technique before you get into the water. Then, it's off into the ocean, where you start off in broken waves, the white foam created after the waves run their course. You'll be amazed at how easy, safe, and enjoyable it can be to learn to surf.

The Sydney Classic Tour is a relaxing ride around the amazing city of Sydney. You will see the Sydney Opera House, Sydney Harbour (right next to the yachts themselves), the Sydney Harbour Bridge, Darling Harbour, the Royal Botanic Gardens (including the Flying Foxes), Hyde Park, the Anzac War Memorial, Chinatown, Sydney Tower, Parliament House, Queen Victoria Building, Museum of Contemporary Art, Art Gallery of NSW, and over 30 more great attractions! You will even stop by a warm friendly pub as a half-way point on your tour! (But just for a quick drink...there's a lot to see on this tour.)

The colours of twilight add an element of romance to your journey, as you watch the magical lights of Sydney flicker around you. The city's dusk sky is truly breathtaking, alongside the bridges powerful structure. There are two options for climbing during twilight: you can experience the transition from day into twilight (early twilight) or twilight into night (late twilight). On either climb, you will begin your ascent in daylight and descend at night, with full night climb equipment provided.

Today, transfer to Sydney Airport for your flight to Hobart.

On arrival at Hobart Airport, you will be transferred to your hotel.

The balance of the day is at leisure to relax and enjoy.

You will be collected from your Hobart hotels at approximately 7:30am. Back out the city base, you'll have time to meet the rest of the group, pack backpacks and be given a briefing. Drive to the coast and take a marine adventure in a private catamaran to the remote southern end of Maria Island, arriving in ample time to enjoy stunning views and walk through beautiful forests with abundant wildlife. Enjoy fresh Tasmanian produce and fine wines in Casuarina Camp before heading to your comfortable cabin.

Today's walking distance in a minimum of 3 and maximum of 12 kilometres, depending if guests want to enjoy an optional walk.

Your morning starts leisurely and after a relaxed breakfast and morning dip it's time to start the journey along five beautiful beaches. Walk from Reidle Bay across the rare land formation of the isthmus to Shoal Bay. Explore the convict cells at Point Lesueur and visit an ochre pit at Bloodstone Point - one of the original ochre sources for the Tasmanian Aborigines.

You arrive by late afternoon for a refreshing swim and after the perfect day, relax with your fellow walkers, before enjoying another gourmet feast with fine Tasmanian food and wine. Today's walking distance is 14 kilometres over flat ground and sandy beaches.

Today, head inland to discover green forests that are a prime habitat for the endangered 40 Spotted Paradalote. Take the gentle inland track to Hopgrounds Beach and the Painted Cliffs or continue to the 709-metre summit of Mt. Maria for breathtaking views.

Arrive this evening at the enchanting World Heritage settlement of Darlington where you will stay at the historic Bernacchi House enjoying hot showers and a final banquet with fine wine and conversation. Today's walking distance is a minimum of 6 kilometres and around 17 kilometres if you choose to climb one of the mountain peaks.

The final day begins with a delicious breakfast and time to enjoy at your own leisure. Experience Darlington's rich history - the convict years, the industrial era and the fascinating farming history. Continue onto the dramatic sea cliffs of Fossil Bay and then head down to the remarkable fossils at Fossil Cliffs.

Enjoy a farewell lunch overlooking Darlington. Return to Hobart where you will be transferred to your hotel for the night.

Today, transfer to the Hobart Airport for your onward travels.