Explore the two most popular cities of Australia and New Zealand on this air-land combo tour. Start in Sydney, where you'll tour the Sydney Opera House, cruise across the famous harbour, and see koalas and kangaroos at Taronga Zoo. Then head on to Auckland where you'll explore the twin harbours, learn about Maori traditions, and enjoy unbeatable views of the landscape. 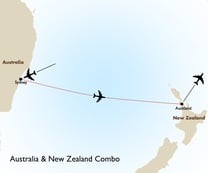 This 11-day Australia vacation showcases the two most popular cities in Australia and New Zealand. The airfare is included in the price.

Your trip to Australia begins in Sydney, the nation's largest city and one of the most beautiful cities in the world. Take a half-day tour to see the city sights, starting in the historic Rocks neighbourhood where you'll learn about the country's formation as a penal colony before heading to the harbour to feel the sea breeze on your face and admire views of the iconic Harbour Bridge and Sydney Opera House. You'll enjoy a guided tour of the opera house and experience its world-famous acoustics for yourself before rounding out your tour with a visit to Darling Harbour and Bondi Beach, where you can work on your tan and hobnob with surfers who worship the beach's warm sand and big waves. The next day, take advantage of a harbour cruise to see some of the most famous landmarks from the water. You'll cruise across Sydney Harbour to enjoy the best views of the Harbour Bridge and the Sydney Opera House before heading to Taronga Zoo to say "G'day" to kangaroos, koalas, and other critters that are unique to Australia.

After a few days enjoying Sydney's sunny climate and marvellous cultural sights, head to Auckland, the gorgeous city in New Zealand that's framed by two natural harbours. You can get your bearings and enjoy the best views of the city by climbing the Sky Tower or you can head to Auckland Domain to explore an extinct volcanic crater and meander about the gorgeous hillsides. While in Auckland, you'll take half a day to cruise the sparkling waters of Waitemata Harbour. Sit back and relax as you enjoy the best views of this stunning harbour and pass by various landmarks like the Viaduct Basin, historic Devonpoart, and Rangitoto Island, learning about the history of each icon. The next day, explore the wonders of nearby Waiheke Island. You'll cruise across the Hauraki Gulf to reach Waiheke Island, where you'll admire the island's unique culture, history, and geography. You'll then have another day in Auckland at leisure, where you can take advantage of the local markets bursting with Maori arts and crafts or take a day trip to the nearby Bay of Islands or Rotorua, home to mud pools and geysers. After exploring Auckland, you'll head to the airport where Air New Zealand will whisk you back home.

You will lose a day, which is regained on the return journey

On arrival in Sydney you will need to make your way to your hotel.  Goway can assist with prebooking airport – hotel transfers if required (additional charge applies).   The remainder of your day is at leisure.   Nature blessed Sydney with one of most idyllic settings in the world which is reflected in its large eye-appealing harbour and excellent beaches. This cosmopolitan city is not only scenically beautiful but, like most major cities, has an abundance of culture, history and venues to keep any visitor occupied for several days.

When in Sydney do what the locals do and travel on the harbour highway. The Hop On Hop Off Harbour Explorer pass is the easy way for visitors to explore Sydney over 2 days visiting up to eleven famous harbour precincts including Darling Harbour, Circular Quay (The Rocks & Opera House), Taronga Zoo, Watsons Bay, Luna Park, Manly, Fort Denison, Shark Island, Barangaroo, International Convention Centre Darling Harbour and Garden Island with full commentary. The round trip cruise is 60 - 90 minutes in duration with 30 - 45 minutes between vessels and you can stop off at any attraction and re-board the next Explorer with your two day ticket. Included in this pass is entry to Taronga Zoo and the Sky Safari Cable Car. Taronga Zoo is open from 9am - 5pm daily.

Today is a free day, perhaps take an excursion to the Blue Mountains or the Hunter Valley – one of the premier wine regions in Australia

Auckland, the largest city in New Zealand on the North Island, is known as the “City of Sails” due to its attractive harbour, home to thousands of sailing boats. It occupies a narrow isthmus between the harbour and the sea. It also has the largest Polynesian population of any city in the world.

This modern city combines urban with beautiful beaches, hiking trails, islands and a rugged West Coast. For amazing views of the city, visit the Skytower, the tallest building in the Southern Hemisphere or Mount Eden, an extinct volcano crater and the highest point in Auckland. Both have 360 degree panoramic views of the city and surrounding area.

Auckland offers excellent shopping mainly on Queen Street as do several nearby neighbourhoods such as Newmarket and Ponsonby, the latter a good place to stroll day or night for its cafes and nightlife.

Today explore the city on your Hop On Hop Off Auckland city sightseeing tour, plus escape the city and cruise the sparkling waters of Auckland's beautiful harbour. Sit back, relax and let the Fullers crew look after you with full commentary during the one and a half-hour harbour cruise. Visit the Viaduct Basin, see the harbour highlights including historic Devonport, the Auckland Harbour Bridge, Bean Rock Lighthouse, and the Devonport Naval Base. For those on a tight itinerary, the Fullers Harbour Cruise is an ideal way to experience Auckland taking in views of three major Auckland Icons: the Harbour Bridge, Rangitoto Island, and the Sky Tower.

Be introduced to Waiheke on the Fullers Explorer Tour, a picturesque 35 minutes boat trip followed by 1.5 hour scenic highlight tour of Waiheke's stunning locations. Cruise to Waiheke through the glorious Hauraki Gulf, on arrival you will be met by an experienced guide who will give you a taste of the views, culture and history that make up the diverse Island of Waiheke. On conclusion of the tour, take advantage of the complimentary All Day Bus Pass allowing you to either return to a destination on the tour or discover the island further on the Waiheke Island scheduled bus services.

Today is a free day, perhaps take an excursion to the Bay of Islands or Rotorua, the geothermal wonderland of New Zealand

Your South Pacific vacation ends today with your transfer to the airport.  Join your Air New Zealand flight back to North America

If you hotel stay falls over the following dates, a surcharge will apply to your vacation

Prices are quoted in USD/CAD and are ‘from’, per person, based on double/twin occupancy. Single supplements apply. Seasonal surcharges and blackout dates may apply, pricing also based on flights Mon/Tue/Wed/Thu, if travelling on a Fri/Sat/Sun a weekend surcharge will apply.