Embark on New Zealand cruise vacation that takes you to the island country’s most appealing ports including Nelson, Picton, Dunedin, and of course, the magnificent Fjordland National Park. It all starts in Sydney, where you’ll enjoy a tour of the land Downunder’s most recognisable city. 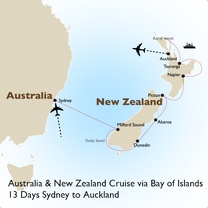 Beginning in Sydney, Australia, this 13-day cruise offers a superb introduction to New Zealand’s most attractive coastal cities, its most famous wine region, and its most iconic natural landmark.

Your journey begins in Sydney, Australia’s most recognisable and beautiful city. An afternoon panoramic city tour takes you to many of the city’s most impressive sights, including world famous Bondi Beach, Circular Quay, spectacular harbour views at Mrs Macquarie’s Chair, and the Queen Victoria Building, Australia’s most beautiful shopping mall. Then board the Norwegian Jewel for your two day journey across the Tasman Sea, where your New Zealand adventure awaits.

New Zealand’s biggest attraction in more ways than one, Milford Sound is the awesome centrepiece of Fjordland National Park. You’ll spend a full day cruising the (often misnamed) fjords, including Milford, Doubtful Sound, and Dusky Sound. Even as you admire the peaks surrounding you, keep your eyes peeled for wildlife both on shore and swimming alongside ship.

The South Island adventure continues in Dunedin, New Zealand’s most Scottish settlement, crackling with both Gold Rush history and the energy of a modern day university town. Then sail on to Akaroa, just outside the city of Christchurch. This historic peninsula has become a haven for little penguins as well as a delightful small town in its own right, with open air cafes, galleries, and shops lining its streets.

Your last stop before leaving the country’s South Island is Picton, where you’ll enjoy a wine tour in the famous Marlborough region, home to arguably the world’s best Sauvignon Blanc. If you’re not a wine drinker, Picton also offers a variety of shops selling locally produced artworks and craft pieces. Then dock in Napier, one of New Zealand’s most appealing cities, noted for an Art Deco style that echoes Miami.

The Bay of Plenty, watched over by the city of Tauranga, is a popular kiwi vacation spot and your next destination, showcasing why New Zealand is considered one of the world’s most liveable countries. Then explore New Zealand’s stunning Bay of Islands. Untouched by development, the entire bay preserves nature at its purest, offering kayaking, fishing, wildlife watching and more. The bay also has a fascinating human history as the first site of British settlement.

Disembark at last in Auckland, which offers the perfect mix of big city sophistication and outdoor appetite. You may wish to stay on a few days to explore the highlights, including the city’s picturesque university and inner city park, the Domain.

Holiday Inn Old Sydney is one of Sydney's little secrets, uniquely positioned between the Harbour Bridge and Opera House, perfectly located to experience the shops, cafes, and restaurants the Rocks is famous for. Stroll down the harbour-side promenade past the Museum of Contemporary Art to lively Circular Quay with its exceptional restaurants and bars. Here, you can catch a ferry to Manly Beach, Watson's Bay, Taronga Zoo, or enjoy a fabulous Harbour cruise.

Return to Sydney via Double Bay, Kings Cross and Mrs Macquarie's Point for a final magical viewpoint over the harbour before returning to the city centre.

Sydney's harbour is the hub from which there's much to see and do. You'll want to explore this area, home of the iconic Opera House. Admire the skyline, swim at a harbour beach or cross the Sydney Harbour Bridge. Want to see surfing? Grab your sunblock and towel and spend the day on world-famous Bondi Beach, or take a scenic walk on the coast from Bondi to Coogee Beach. The Rocks district is a shopper's mecca offering a wide variety of goods, from woodcrafts and unique art to outback fashions.

Today is a day at sea. From top to bottom and from bow to stern, the Norwegian Jewel has enough onboard activities - and relaxation options - to fill every minute of your cruise. Indulge in a refreshing swim, cocktail or ice cream treat at the Oasis Pool. Feeling lucky? Bet it all at the award-winning Casino at Sea. Hungry or thirsty? Choose from sixteen delicious dining options and fifteen bars and lounges. And when you need a break from it all, enjoy a pamper session at Mandara Spa. With so much to do, Norwegian Jewel will always have you coming back for more.

Spend today cruising Milford Sound, Doubtful Sound and Dusky Sound in Fiordland National Park. Fiordland is the most popular tourist destination in New Zealand. The Park is over 1.2 million hectares in size and encompasses mountain, lake, fiord and rainforest environments and is home to a diverse range of flora, fauna and fabulous landscapes.

This dramatic South Island coastal town offers a mix of unique natural beauty and fascinating history. Rare, yellow-eyed penguins, fur seals and the Royal Albatross all call Dunedin home. Equally impressive is the Victorian and Edwardian architecture that dates from its days as a gold rush town. New Zealand's only castle sits high above the city and offers sweeping views from its famous gardens. Shop for a locally made souvenir, with crafts, artwork, wool and leather items being popular.

Tiny penguins rule the roost in this historic settlement nestled in the heart of an ancient volcano. With a balmy, year-round climate, these famous foot-tall residents are certainly not snowbirds. The spectacular surroundings offer a wealth of outdoor activities, both in the sheltered harbour and on dry land. Cafes open onto streets and exquisite local boutiques and galleries offer superb local works. Be sure to sample the fine fudge and traditional cheeses.

Built around a sheltered harbour, Picton is lined with cafés and restaurants for you to choose from (we suggest the fish and chips). Popular attractions in Picton include a maritime museum and an aquarium. But this town is not short on recreational activities. Some of Picton's favourite pastimes include fishing, dolphin watching and sea kayaking. Walk or bike the Queen Charlotte Track or spend the day exploring the scenic Marlborough Sounds. Check out one of the many wine tours (probably after biking the track). Then relax as you browse the local shops that offer a wide range of trinkets, including handmade jewelry, paintings from local artists and woodcarvings. Before leaving Picton, it's time for more fish and chips along the shore. It's the Picton way!

Napier calls itself the Art Deco capital of the world, but it's also a leading wine-travel destination. Levelled by an earthquake in 1931, Napier was rebuilt in Art Deco style. Along with Miami Beach, Napier is one of the best examples of this style, with many of its structures well preserved. Take a walk down Marine Parade, a tree-lined ocean boulevard with fountains and gardens, or go out to the country to enjoy the lovely vistas, tour superb area vineyards and relax with a glass of wine.

Go walk-about and explore Tauranga, set on the beautiful Bay of Plenty. And indeed there are plenty of things to do. Head to the beach or discover Tauranga's lovely parks and rich history. Visit a village buried by a volcanic eruption and captured in a moment of time - a fascinating yet moving experience. Take a selfie at Hell's Gate, an aptly named geothermal park with boiling pools, fantastic geysers and mud baths, the largest of which is Poutamu, "the stairway to heaven."

This subtropical region of around 150 undeveloped islands is known for its stunning beauty and history. From kayaking to fishing to wildlife watching, it's a water enthusiast's paradise. You'll want to have your camera ready for an abundance of sea life, from dolphins that fly to penguins that dress in blue. The site of New Zealand's first British settlement, it offers numerous historic sites as well. Meet local artists while shopping for paintings, pottery, textiles and woodcarvings.