Surf, swim, and suntan your way along Australia’s East Coast between Sydney and Arlie Beach. You’ll hang out and surf in boho Byron Bay, explore the sand dunes and rainforest of Fraser Island, and cruise the Whitsundays aboard a yacht, stopping at famous Whitehaven Beach along the way. 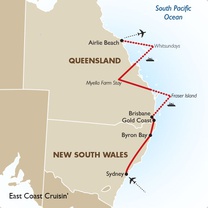 This 11-day Australian vacation takes you on a coastal adventure from Sydney to Airlie Beach. It features budget and moderate accommodations, including a stay at a farm and on a yacht, shared tours, and is perfect for 18 to 30-somethings looking for fun Downunder.

Your journey begins in Sydney, Australia’s largest city, where you’ll meet up with your crew and see some of the sights, including the Harbour Bridge, on your way out of town. First stop is the Hunter Valley, where you’ll sample some local wines, before you reach Surf Camp, where you’ll learn to crave like a pro. Continue onward to boho Byron Bay, where latte, yoga, and all-night parties are the norm. You’ll have a full day here during which you can hang out at a local beer garden, sunbathe on the sand, or kayak alongside friendly dolphins. Then leave New South Wales behind and pass into Queensland.

Today we hit Surfers Paradise and the Gold Coast, some of Australia’s most popular beach spots. Soak up some rays on the golden sands. Next, stop off in Brisbane, the state capital and one of the nation’s largest cities before connecting to Fraser Island, the world’s largest sand island and home to the longest beach in Queensland. You’ll spend a full day on a guided tour of the island, hiking alongside the freshwater of Eli Creek, spotting coloured sand pinnacles near the Maheno Shipwreck, and enjoying the beautiful landscape of Lake McKenzie and 75 Mile Beach.

Connect back to the mainland and embrace your inner jackaroo or jillaroo at Myella Farm. Spend a day on this working cattle farm, learning to crack a whip, milk a cow, and embrace the country life like a real farmer. Head back to the coast and board your yacht for a journey to the Whitsundays, among Australia’s most popular vacation spots. These islands have year-round warm waters and beautiful sandy beaches. You’ll stop off at the most famous of its beaches, Whitehaven Beach, before disembarking at Arlie Beach, where your journey ends.

This itinerary is also available in the opposite direction, from Arlie Beach to Sydney.

What's upppp, Sydney! Meet and greet your fellow Topdeckers in the big city, hop aboard the coach, whizz over the Sydney Harbour Bridge, and get pumped for the next eleven days of East Coast awesomeness. Our first stop? We're glad you asked! We'll call in at the Hunter Valley for a spot of wine tasting and grape stomping. After stocking up on a bottle or two, we'll hit the road to Surf Camp. Excitement levels: 100/10.

Roll out of bed, down that coffee and get ready to hit the waves - an included surf lesson awaits! Whether you're a complete beginner or a seasoned pro, the camp instructors will give you some expert tips that'll have you hanging ten in no time (insert shaka). Then, onwards to ultra-zen Byron Bay. Get your bearings on an included orientation tour before we set you free to explore. Here you can shop till you drop at cute boutique stores, sip matcha lattes with the locals, perfect your downward dog in a yoga class, and party hard on an epic night out - all in the space of 24 hours! Oh - and the beaches are incredible here, too.

Awww, yeah - you've got a free day in Byron Bay! Anti-McDonalds but pro fresh juice bars, sunny beer gardens, and hipster beards, it's no wonder Byron Bay is a traveler hotspot. Why not hit the beach and practice your new surfing skills? Alternatively, you could kayak with dolphins (seriously) or explore the array of funky vegetarian and vegan cafés in town. Want something a little higher-octane? How about freefalling at over 200km/hr from 15,000 feet on an optional skydive? Heck yes! Tonight, grab a perch at the Beach Hotel for some live music and awesome views.

Down one last chai latte in Byron Bay before we roll onto Australia's playground: the Gold Coast. New state alert! Known for its golden beaches, trendy restaurants, and theme parks, Queensland's GC has something for everyone. We'll hit up glitzy Surfers Paradise and get a chance to see why the nightlife here is up there with the best in the country. Enjoy it while you can - tomorrow, we're island-bound.

On our way to Fraser Island, we'll swing by the state capital: Brisbane. We'll cruise along the mighty Brisbane River and past prominent historic buildings and the pretty South Bank on an orientation tour before cracking on to our next destination. Have you turned your watch to island time? Breathe in the fresh air and relax - you've got two nights on rugged Fraser Island to look forward to. Make sure you keep your eyes peeled for the resident dingoes! Please note: As space is limited, we ask that you pack a small overnight bag to take with you to Fraser Island. Pack items like swimmers, a beach towel, chargers, a hat, sunscreen, a camera, a jacket, toiletries, sandals/flip flops and casual clothes for two days.

Rise and shine! We've got a full-day guided tour of this beautiful island on the agenda today. It'll be love at first sight as you hit up gorgeous Lake McKenzie and 75 Mile Beach, visit the Maheno Shipwreck and colored sands of the pinnacles, explore the awe-inspiring rainforest and splash in the fresh waters of Eli Creek. And if that wasn't enough, there's a yummy buffet lunch included, too. Prefer a view from above? There's an optional scenic flight on offer if you're keen. Tonight, we'll share pics, crack open a cold one and watch the sunset. What. A. Day.

Wash the salt from your hair and wave goodbye to the coast this morning as we roll onto Myella Farm. Think stunning landscapes, tonnes of wildlife and plenty of country hospitality. Pinch yourself - staying on a working cattle farm is as unique as it gets!

Embrace your inner jackaroo (or jillaroo) and prepare to get stuck into farm life! First up, we'll learn how to crack a whip and milk a cow like a real station hand. Later, you can opt in to explore the farm on horseback, or simply kick back by the pool. This evening, we'll dust off the red dirt and enjoy another delicious meal made with home-grown ingredients. Yum!

Stayed overnight on a yacht before? There's a first time for everything! Get ready to indulge in a spot of stargazing as you sail the beautiful Whitsunday Islands. It's a tough life! Please note: As space on the yacht is limited, we ask that you pack a small overnight bag to take with you. Pack items like swimmers, a beach towel, chargers, a hat, sunscreen, a camera, a jacket, toiletries, sandals/flip flops and casual clothes for two days. Twin/double/single upgrades are not available for overnight sailing in the Whitsunday Islands.

Sun. Sand. Sea. Does it get better than this? Shorten your bucket list with a visit to Whitehaven Beach and get ready to swim, sunbathe and snorkel the day away. Then: grab a last pic of paradise before we head back to Airlie Beach. The nightlife here is a traveler's dream. It'd be rude not to get out there and enjoy it - it's the last night of the trip, after all.

Grab one last group photo with your new #Topdeckfam - the trip ends after breakfast. Sticking around? We don't blame you. This place is amazing, after all!