FIRST-CLASS | SELF-DRIVE: Get to know both of New Zealand’s islands by driving through their most popular sites. Travel from Auckland to Christchurch, visiting Rotorua, Queenstown and Milford Sound in between. 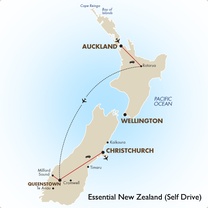 Haere Mai - Welcome to New Zealand. After collecting your rental car, drive into the city. The rest of the day is at leisure.

This morning go on a tour of Auckland to explore the sights and history and to discover how Aucklanders live and play. This afternoon travel to the Waitakere Ranges, visit the black sand beach and travel into a dense rainforest with tree ferns, Kauri trees and waterfalls.

The morning is at leisure before you drop off your car and board your flight to Queenstown. On arrival pick-up your car and drive to your selected accommodation (airfare not included).

Travel south into Fiordland, through Homer Tunnel to Milford Sound. Cruise past mile-high Mitre Peak, along this 16 km long glacially-carved fiord, and out to the open sea. This will be one of the most memorable experiences of your holiday. In the afternoon return to Queenstown.

Drive past Lake Wanaka and over historic Lindis Pass, stop to view majestic Mount Cook, known by the Maori people as "Cloud Piercer". Then cross the Canterbury Plains to Christchurch.

Christchurch to your next stop

The day is at leisure until you drop off your car at the airport and board your onward flight.