This escorted experience is perfect for train buffs. Travel on coaches, cruises and enjoy iconic New Zealand rail journeys while staying in comfortable accommodation. The journey will take you from Auckland and geothermal centre of Rotorua, to the capital of Wellington before moving onto the South Island and exploring famous Milford Sound. 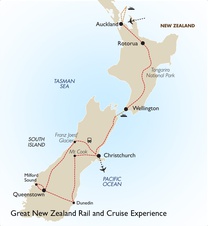 This 16-day tour takes you across New Zealand by boat and rail, offering a complete portrait of this amazing country.

Your journey across New Zealand’s waters and rails begins in Auckland, which is consistently rated one of the most livable cities on the planet. Auckland is about as pretty as a city can get. It’s framed between two natural harbours that form the rocky isthmus upon which the city stands. Climb the Sky Tower to view the harbours from high above, or visit the Auckland Museum to learn about the city’s history. From Auckland, take a journey aboard a restored steam engine, the Glenbrook Vintage Steam Train, enjoying the picturesque Franklin countryside as people would have 100 years ago. Then board the Ipipiri for an overnight cruise across Waitemata Harbour and the Hauraki Gulf.

Return to land and head south to Rotorua, a geothermal marvel that’s one of New Zealand’s main tourist hubs. In Rotorua you can see mud pools, hot springs, and Pohutu Geyser, which can shoot water 30 metres high. Also take the opportunity to learn about traditional Maori life at the Whakarewarewa village and visit the nearby Hobbiton movie set if you’re a film buff. Head onto Taumarunui to ride a decommissioned railway line and explore the tunnels, bridges, and towns of Whanganui National Park.

Onward to Wellington, the capital of New Zealand and its second largest city. Visit the Fell Locomotive Museum to a see Locomotive H 199, the last engine of its kind remaining in the world. Then ride the red Wellington Cable Car to the Botanical Gardens and look out over Cook Strait. If you want to learn about the nation’s history, visit one of the city’s many museums, such as the national museum, Te Papa Tongarewa. Then board the Interislander ferry to cross the Cook Strait and reach the South Island. Board the Coastal Pacific Train in Picton and make your way down to Christchurch, the South Island’s largest city.

Christchurch is still rebuilding from the earthquakes of 2010 and 2011 that devastated most of its historical sites. While the city remains in the process of redevelopment, it’s still very much worth visiting, with the Botanical Gardens remaining a great highlight. Once you’ve soaked in the city’s atmosphere, board the TranzAlpine Train to head across the Canterbury Plains and the Southern Alps to the incredible Franz Josef Glacier.

Continue to Queenstown on the shores of Lake Wakatipu in the Southern Alps, where you can satisfy your wildest outdoor ambitions. If you want to sky dive from airplanes, bungie jump from bridges, or jet-ski across waters, this is the place to be. Head to Skippers Canyon for outdoor adventure or visit the nearby film sets from The Lord of the Rings. Take a break from adventure by slowing down the pace at the many vineyards or golf courses around the valley.

Pass onto Milford Sound, one of the top travel destinations on the planet. This fjord in southwestern New Zealand is a stunning waterway that culminates in Mitre Peak (Rahotu), the most photographed mountain in the country. Explore Milford Sound and the surrounding Fjordland National Park before heading to Te Anau, the second largest lake in New Zealand. Pass into the harbour of Dunedin before visiting Mount Cook, the highest mountain in New Zealand, and Lake Tekapo before returning to Christchurch for your flight home.

Arrive in Auckland and be transferred to your centrally-located hotel. Enjoy some time to settle in and the evening at leisure.

Enjoy the opportunity to discover the 'City of Sails' with our range of sightseeing inclusions. This evening, enjoy a Welcome Dinner as you get to know your Tour Director and your fellow travellers.

Freedom of Choice Sightseeing
Perhaps take a cruise on Waitemata Harbour, head off on a Waiheke Island wine and olive tasting tour, or explore the fantastic Auckland Museum. Alternatively, get up close to marine life at Kelly Tarlton's Sea Life Aquarium, or set off on a Wilderness Adventure into the Waitakere Rainforest.

This morning, travel to Glenbrook and on arrive, enjoy a special Signature Experience. Travel to Victoria Avenue and Waiuku, before enjoying a stop at the Pukeoware Depot. Here, you'll explore the workshop, view other historic regional locomotives undergoing restoration, and indulge in a delightful morning tea. Later, reboard the train and travel back to Glenbrook. This afternoon, board your coach for your journey to Rotorua.

Signature Experience
Board the Glenbrook Vintage Railway. Lovingly restored, you will enjoy a journey through the beautiful rural Franklin countryside aboard this historic steam train.

Signature Experience
Immerse yourself in Maori culture as you enjoy a traditional Hangi feast and fascinating performance.

Freedom of Choice Sightseeing:
Perhaps experience the icons of Rotorua at the famed Agrodome Farm Show, then make your way to Rainbow Springs Nature Park to see a working kiwi nursery and visit the fascinating Te Puia Thermal Reserve. Alternatively, take a Hobbiton Movie Set tour for an enthralling insight into the making of the Lord of the Rings trilogy. Perhaps drive through forest and farmland to visit New Zealand's largest boiling mud pool and colourful hot springs; or explore Redwood Treewalk with a Maori guide.

After your Signature Experience, ride the Mt Ruapehu Gondola for sublime vistas before enjoying afternoon tea.

Today's journey takes you to the town of Featherston. Delight in a relaxing afternoon tea before travelling to Wellington, New Zealand's vibrant capital city by the water. Though it may be small for a capital city, Wellington is brimming with character and charm, alive in its compact CBD. Enjoy time to settle in at your hotel before dinner this evening.

Signature Experience
Take the opportunity to explore the fascinating Fell Locomotive Museum, home to H199, the only locomotive of its type in the world.

Set off on a tour taking you to the city's best-loved landmarks and sights, including New Zealand's national museum - Te Papa Tongarewa. Afterwards, ride Wellington's iconic Cable Car, gaining a fresh perspective as you gaze out across this coastal city. The afternoon and evening have been left free for you to enjoy Wellington at your own pace. Perhaps grab a bite to eat at one of the spectacular waterfront restaurants.

Arrive in Picton and board the Coastal Pacific train and enjoy a journey through the rugged east coast to Christchurch.

Signature Experience
Step aboard the Interislander ferry to cruise across the Cook Strait.

Signature Experience
Board the Coastal Pacific train and enjoy a journey through the rugged east coast to Christchurch.

On the TranzAlpine train, head to the open-air viewing platform and enjoy stunning views as you journey through the patchwork farmlands of the Canterbury Plains. Disembark at Greymouth and travel by coach to Franz Josef.

Signature Experience
Board the TranzAlpine train for one of the world’s greatest rail adventures.

Enjoy breathtaking scenery as you travel along the Haast River. Arrive in Queenstown, New Zealand's 'adventure capital', where this evening you will choose from four tempting restaurants in which to dine.

Freedom of Choice Dining
Perhaps sample quality crafted beer at Canyon Food &amp; Brew Co. Or, board a scenic gondola ride to the Skyline Restaurant to enjoy views across Queenstown as you dine. Alternatively, you may prefer to cruise aboard the TSS Earnslaw, or dine at Elements Restaurant.

Choose from a range of sightseeing today.

Freedom of Choice Sightseeing:
Lord of the Rings fans will jump at the chance to visit key filming locations, while thrillseekers can try a ride on the famous Shotover Jet Boat, a Skippers Canyon adventure or a river safari along the Dart River. Why not tour the country's premier wine-producing region and savour the local offerings? Nature enthusiasts may enjoy a 4WD experience at Mt Nicholas or a bird walk through the surrounding wilderness. A cruise on Lake Wakatipu is also on offer.

Embark on one of the most scenic drives today as you journey along into the heart of Fiordland National Park. Then, board a cruise across Lake Manapouri and then travel by coach over Wilmot Pass to arrive at Doubtful Sound. During your time here, board a spectacular overnight cruise to discover rugged peaks, hidden islets and pristine rainforest.

Signature Experience
Cruise along Doubtful Sound, the second largest fiord within the national park. The fiord is rich in flora and fauna, so keep watch for New Zealand Fur Seals and Fiordland Crested Penguins that call this special place home.

Leave the Fiordland region this morning and travel to Dunedin on the east coast of New Zealand. This historic city is often referred to being the Edinburgh of the South.

After a unique Signature Experience, you will enjoy the rest of the day at leisure.

Signature Experience
Step aboard the Taieri Gorge Railway and journey through the picturesque Southland countryside.

After a special Signature Experience, rejoin the coach and travel to Oamaru, then head north to see the unusual Moeraki Boulders. Visit the Sir Edmund Hillary Alpine Centre, including a visit to the planetarium and a stargazing session with an astronomer.

Signature Experience
Board the Seasider train and travel along Otago Harbour before climbing the gentle slopes of Port Chalmers on the Pacific coast.

After breakfast this morning, travel to Lake Tekapo and visit the tiny Church of the Good Shepherd. Later, continue to Christchurch airport where your tour ends.