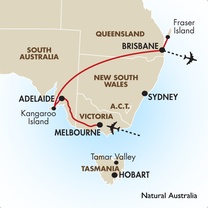 Go beyond ‘postcard’ Australia on this magical 2 week journey, taking in natural wonders such as The Twelve Apostles, Kangaroo Island and Fraser Island.

Collect your rental car for the journey along the Great Ocean Road. See unforgettable sights such as The Twelve Apostles, a spectacular formation of offshore limestone stacks shaped by centuries of erosion from the Southern Ocean. Continue on to the Grampians National Park, home to Victoria’s biggest collection of Koori rock art and a network of 50 walking tracks.

Cross the state border into South Australia to visit either the town of Naracoorte or Coonawarra. Then, it’s on to charming Adelaide, the centre of one of the country’s largest winemaking regions. Spend the evening at leisure in Australia’s ‘Festival City’.

Fly on to Kangaroo Island, one of Australia’s most diverse ecological regions. A guided walk will introduce you to the local wildlife, which includes over 260 species of birds. Other highlights include Flinders Chase National Park, the Rocky River region and a stop at Seal Bay National Park, where you’ll have the chance to walk among the island’s famous sea lions.

Staying at Kingfisher Bay Resort, discover the amazing coloured sands and shipwrecks of nearby Fraser Island on a full day 4WD coach tour, before boarding the Tilt Train for your journey back to Brisbane.

Upon arrival you will transfer to your hotel. Tonight you might like to dine aboard Melbourne's Tramcar Restaurant (additional cost)

Your city tour will take you to cathedrals, parks, gardens and historic landmarks such as Captain Cook's cottage. An afternoon and evening tour takes you to see the world renowned "Little Penguin Parade"

Today you will collect your rental vehicle and make your way past Geelong and on to Torquay. This is where the Great Ocean Road begins its journey westward

Apollo By to Warrnambool

Continue along the Great Ocean Road. On your way to Warrnambool visit the quaint town of Koroit, where Irish immigrant farmers originally settled.

Travel to the Grampians National Park and Halls Gap. The scenic Grampians is one of Victoria's largest and most accessible National Parks. It is home to the biggest collection of Koori rock art in the state, and is well known for its wildflowers, striking rock formations, panoramic lookouts and network of 50 walking tracks.

Depart Halls Gap today crossing the border to Coonawarra. The lakes and waterways are perfect for fishing and enjoying the views of the Grampians

Continue travelling north to Adelaide. Drop off your vehicle and make your way to your accommodation. The rest of the day is at leisure.

Transfer to the airport for your flight to Kangaroo Island. Visit unique Seal Bay where you'll get up close to nature as the wild Australian Sea-lions frolic and laze about on the stunning beach. Enjoy lunch in an Australian bush setting, followed by a walk around Remarkable Rocks and Admirals Arch in the Flinders Chase National Park

Start the day with an early morning birdwalk. Later, enjoy afternoon tea and a guided rainforest walk or 4WD program (tours may vary each day). In the evening watch an audiovisual presentation or just relax in the lounge room

Transfer to Kingfisher Bay Resort on Fraser Island. Explore the resort, swim in the pools, go bush walking or try your luck with fishing.

Depart after breakfast, you will travel by catamaran and on the Tilt Train back to Brisbane. On arrival you will transfer to your hotel and the remainder of your day is a leisure

Daily*
* In January 2020 areas of Kangaroo Island were affected by bushfires and access to some areas may be limited. The Kangaroo Island portion of your itinerary may be subject to change to include visits to alternate attractions as listed in this itinerary but you will experience amazing sights, wildlife and people

Check with GowayAir for the best airfares to be used with our Classic itineraries.