Journey through Queensland to sample its diverse landscape and vibrant local life. Surf the beaches of the Sunshine Coast, hike the sand dunes of Fraser Island and dive into the wondrous ecosystem of the Great Barrier Reef. 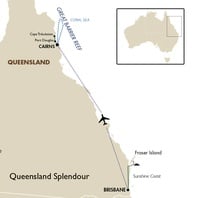 This 8-day tour takes you from the beaches of the Sunshine Coast north to the tropical rainforests around Port Douglas.

Begin your tour in Brisbane and head one hour north to the Sunshine Coast. The Sunshine Coast is one of the best places in Australia to take the local pulse. It comprises 50 kilometres of white-sand beaches and verdant hinterland. Catch a wave at the surf beaches of the Noosa Heads or take the local pulse in the region’s many pubs. Visit the Caloundra County & Farmers Market to sample the region’s produce and seafood or golf on world-class golf courses at Mount Coolum or Palmer Resort Coolum, the home of the PGA Championship in Australia. The Sunshine Coast is an ideal spot to while away the hours of a sunny afternoon on an Australian vacation.

North of the Sunshine Coast is the UNESCO World Heritage Site of Fraser Island. Part of Great Sandy National Park, Fraser Island is like a natural theme park for outdoor adventurers. Ride an ATV across the stretches of Seventy Five Mile Beach. Hike the massive sand dunes or snorkel the water searching for manta rays or dolphins. Take full advantage of the island’s exotic mix of landscapes.

After Fraser Island, head into the north of Queensland to Port Douglas via Cairns. Cairns might by the tourist centre of northern Queensland, but Port Douglas has it beat in terms of charm. A smart little resort town that attracts both backpackers and yacht tourists, Port Douglas is perfectly situated for exploring the surrounding reefs and rainforests that make northern Queensland so spectacular. Relax on Four Mile Beach or kitesurf in the waters off the port.

From Port Douglas, take a cruise out to the Great Barrier Reef, the world’s largest coral reef system. Snorkel beneath the waves for an up-close view of the reef’s amazing sea life. Afterwards, take an excursion to Daintree Rainforest. Cruise down the Daintree River and hike Alexandra Range for a panoramic view of the jungle. At Cape Tribulation, dip into the crystal clear streams of Emmagen Creek or stroll along the beach.

This tour through Queensland showcases the local rhythms and wondrous landscape of eastern Australia.

Experience the ultimate beach holiday at Seahaven Noosa Resort, located with direct access to Noosa Main Beach and the world famous Hastings Street with renowned restaurants, cafes and boutique shopping. You can enjoy the very best of Noosa right at your front door.

Jump aboard a purpose-built 4WD "Warrior" and experience a great value tour of World Heritage Listed Fraser Island. Your experienced and knowledgeable guide will provide you with informative and fun commentary in air-conditioned comfort. First, over to Fraser Island to travel along the spectacular Seventy Five Mile Beach. Explore the natural beauty of this magnificent wilderness with a guided rainforest walk, then continue on through Pile Valley at your own pace. Next enjoy an authentic Aussie lunch followed by a refreshing swim in Lake McKenzie, topping off a perfect day of discovery on the World's largest sand island.

The Meridian at Port Douglas

Meridian Port Douglas is a contemporary boutique resort that offers 33 luxury 4 star apartments in a selection of self catering Studios and One Bedroom Apartments. Meridian is ideal for couples requiring a peaceful and relaxing getaway and is suitable only for mature guests over 16 years of age.

The resorts central feature is the heated lagoon style pool with a sundeck, large BBQ area all set amongst lush tropical gardens. Meridian is a true haven for adults only looking for an escape, in the heart of vibrant Port Douglas. Rooms are not serviced daily (daily housekeeping for an additional fee is available).

For an experience of a lifetime, Quicksilver's wave-piercing catamarans and friendly crew will take you to a reef at the very edge of Australia's Continental Shelf, to an underwater world that is a dazzling kaleidoscope of colour and brilliance.

Agincourt Reef is a magnificent ribbon reef, where you can experience firsthand the magic that is the Great Barrier Reef. Choose to dive, snorkel, or stay dry and explore the stunning reef from the comfort of a semi-sub, only one-metre underwater. Watch the fish feeding from a unique underwater viewing platform and underwater observatory, or fly in a helicopter over the reef (at an extra cost). Whichever way you choose; you'll bring home a lifetime of memories from this living natural wonder.

Your naturalist guide will meet you at your accommodation and after introductions all round we then drive north along the scenic route via Mossman to Cape Tribulation.

Lush farmland contrasts with seascape as we approach the majestic Daintree River. Time for a short morning tea break then its 'all aboard' for an informative river cruise. Relax and enjoy the splendour only the Daintree can offer as you learn of Estuarine Crocodiles, mangrove forests and wildlife, this is nature at its best!

We ascend the Alexandra Range and pause for a panoramic view of World Heritage Tropical Rainforest merging with the azure colours of the Coral Sea. Experience the rainforest intimately on our elevated National Park Boardwalk. Accurate interpretations of flora and fauna will be given with ample time for photographs and questions as we search for the elusive, rare and totally unique Southern Cassowary and other wildlife species within this habitat.

A delicious barbecue lunch with freshly prepared salads (dietary requirements catered for with prior notice) is served while you can hand feed Wallabies and enjoy a cold drink from the bar (own cost). Our tour does a little more, it takes you beyond Cape Tribulation along 7klms of the 4WD Bloomfield Track too pristine Emmagen Creek and time for a refreshing rainforest fresh water swim. Seek fish and turtles in the creek, butterflies and exotic birds in the trees and indulge in a taste testing of tropical fruit, a cup of traditional Billy Tea, and damper all of which enhance the tranquil surroundings.

After a short afternoon refreshment stop at the Daintree Ice-creamery (own cost), we cross the Daintree River by cable ferry and begin our homeward journey somewhat wiser for our 'Total Rainforest Experience'.