From sparkling Sydney to the red centre, discover Australia in detail on this amazing journey. 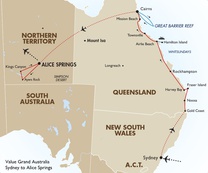 This 17-day trip takes you to some of Australia’s most popular highlights from Sydney to Alice Springs.

Start with a coach tour of Sydney, Australia’s most glamourous and diverse city. Take it all in over dinner atop Sydney Tower then set out for Port Macquarie, a beautiful beach town on the New South Wales coast. Continue north to Byron Bay. Australia’s most easterly point has been a haven for hippies and free thinkers for decades, and offers some relaxation and respite before you cross the border into Queensland. Here, you’ll visit Australia Zoo, made famous by the late Crocodile Hunter, Steve Irwin.

Overnight on Fraser Island, the world’s largest sand island, where a half-day sightseeing tour takes you to highlights such as the Maheno wreck. Back on the mainland, travel through sugarcane country before reaching Rockhampton, your gateway to Daydream Island. Another of Queensland’s offshore gems, Daydream is part of the Whitsunday Islands, with secluded beaches and a wide variety of marine life. You may opt to visit the famously unspoiled sands of Whitehaven Beach.

Heading north to Cairns, turn inland to discover the Atherton Tablelands, and the rainforests they support. You’ll visit some of the local towns before returning to Cairns aboard the Skyrail Rainforest Cableway. Then it’s on to the Great Barrier Reef, the jewel in North Queensland’s crown. Snorkel in a sheltered coral lagoon or join a semi-submersible tour to admire the colourful inhabitants of the world’s largest reef system.

Say goodbye to your Tour Director today and get airborne for your final stop, Australia’s red centre. Start in Alice Springs, then follow the trail of the early settlers to Uluru, also known as Ayers Rock. Uluru is a sacred site to Australia’s indigenous people, who ask guests to refrain from climbing it. Instead, you’ll tour the base of this awesome monolith, discovering its many stories along the way. Just as essential is a visit to Kata Tjuta, also known as the Olgas. Visit awe-inspiring Kings Canyon on your way back to Alice Springs.  Your Northern Territory touring arrangements are operated on an independent basis by a local driver guide.

Be met on arrival in Sydney and transferred to your hotel. Explore this stunning city on a half-day sightseeing coach tour this afternoon, soaking up the world-renowned landmarks, including the Opera House and Sydney Harbour Bridge.

Transfer to the airport for your flight to the Gold Coast, famous for its uninterrupted coastline fringed by vibrant communities and lush wilderness areas. After settling in, perhaps stroll along the famous soft golden sands of Surfers Paradise Beach, before enjoying the evening at leisure.

Today you have a full day to explore the Gold Coast at your leisure. With 52 kilometres of golden beaches at your doorstep, you won't have trouble finding a patch of sand. Perhaps grab a board and learn to surf, see what's on the menu at one of the restaurants along the waterfront or head into the lush hinterland for a day amidst the subtropical wilderness.

Departing the Gold Coast this morning, you'll head north to the Sunshine Coast. Continue to the chic resort town of Noosa.

Insider Experience
Visit the world-renowned Australia Zoo, made famous by the late Crocodile Hunter, Steve Irwin. Here you will be given the opportunity to gain an in-depth understanding of conservation and see many native Australian species up close.

Insider Experience
Dine with the locals this evening at the Noosa Surf Club.

With some time in Noosa, perhaps head into town or take a stroll along the stunning waterfront. Later, travel to Hervey Bay and join your cruise transfer to the world's largest sand island, World Heritage-listed Fraser Island. This evening, enjoy dinner in the company of your fellow travellers.

Located at the southern tip of the Great Barrier Reef, Fraser Island is a rare and inviting paradise. The untamed wilderness will entice you from the moment you arrive, providing adventure and excitement, but also a relaxing atmosphere from your base here at the eco-friendly Kingfisher Bay Resort. Discover the island today with a half-day tour. With some time at leisure this afternoon, slip into island living and perhaps explore the hundreds of walking trails which criss-cross the island. Immerse yourself in the ancient rainforests or explore the coloured sand cliffs on Seventy-Five Mile Beach. Perhaps visit the wreck of the Maheno, a liner that was driven ashore during a cyclone in 1935 (own expense).

A morning ferry takes you across Hervey Bay, where you will discover why this special place is often referred to as the jewel in Queensland's crown. The journey concludes back on the mainland where you will rejoin your coach to continue heading north. Travel through sugarcane country, crossing some of the many narrow-gauge railway lines that transport sugarcane from the field to processing plants in town, an iconic sight of rural Queensland. Later, arrive in the inland city of Rockhampton.

Explore the charming historical town of Rockhampton, known as the gateway to the coast and the Outback. Founded in 1853, the city is home to beautiful heritage architecture and a rich, fascinating history. Then, travel to Airlie Beach and enjoy one of the region's most beautiful beaches. Here you will join a ferry through the sparkling Whitsundays.

You have the entire day at leisure to do as little or as much as you like. Perhaps snorkel off the beach; enjoy a round of golf or hire a buggy to explore this island paradise (all at own expense).

Take an early morning ferry transfer, gliding from Hamilton Island to the Port of Airlie, where you will reboard your coach and travel to Townsville. On arrival, enjoy a tour of the city. Continue to Mission Beach, the destination where two of the most stunning World Heritage-listed areas meet; the Wet Tropics Rainforest and the Great Barrier Reef. Arrive at your beachfront escape, Castaways Resort and Spa, where the only thing between you and the golden beach is a grassy lawn and a line of coconut palms. Complete with a secluded rainforest swimming area, it won't be long before you discover why Mission Beach has earned its reputation as a haven for rest and relaxation.

As you continue your journey north, you will discover the lush Atherton Tablelands. This region is part of the Waterfalls Circuit, including magnificent Millaa Millaa Falls, known to be some of the most photographed falls in Australia. As you journey towards Cairns, you will visit the Curtain Fig Tree, a natural Australian icon. Arrive in Cairns this afternoon. Enjoy a free evening to explore at your own pace.

Insider Experience
Board the Skyrail Rainforest Cableway in Kuranda and ride above the treetops to Caravonica Lakes.

During an Aboriginal cultural dinner and performance, you will discover the spiritual concept known as Dreamtime, witness a corroboree, then be guided along a flame-lit pathway to a dinner of local produce.

Insider Experience
Cruise from Cairns by fast catamaran to Reef Magic's exclusive activity platform on the Great Barrier Reef and enjoy five hours amid the coral and marine life.

Say goodbye to your Tour Director this morning. From today your Northern Territory touring arrangements will be operated on an independent basis by AAT Kings Australia by local driver/guides. Your adventure to the Red Centre of Australia commences. Fly from Cairns to Alice Springs today (flight not included).

Drive along the West MacDonnell Ranges and stop at a camel farm for an optional camel ride (own expense).

Insider Experience
Head to your resort and enjoy a glass of wine at sunset at a viewing platform overlooking Uluru (Ayers Rock).

Rise early to catch sunrise over Uluru. Visit Kata Tjuta - The Olgas and walk to Walpa Gorge, then travel to Kings Canyon.

Choose one of two walks available to you at Kings Canyon.

Transfer to the airport.

From Day 13, Your Tour Director will say goodbye before your flight to Alice Springs.  From here, the Northern Territory portion of this trip is operated by AAT Kings using local driver/guides.