FIRST-CLASS | CRUISE: Venture deep into the Amazon rainforest and explore the flooded jungles and dark waterways of the Rio Negro on this river cruise. During your Amazon adventure, you’ll journey along the least-inhabited major river system in the basin and see what may be the greatest collection of flora and fauna in the world. 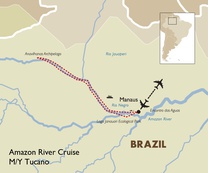 This 5 to 7 day Brazil vacation takes you into the heart of the Amazon Rainforest to explore its flooded forests and magical waterways.

Your Brazil vacation package begins in Manaus, where you’ll board the M/Y Tucano and begin your journey upstream along the Rio Negro. The M/Y Tucano is a 3-star vessel with spacious rooms and 70 large windows that offer great views of the Amazon. Its cabins are air-conditioned with wood panelling to evoke the style of classic steamships. The vessel will be your home as you journey through the water systems of the Amazon.

During your time exploring the Amazon, you’ll head on morning and afternoon excursions into the flooded forests to search for the incredible animals that call the jungle home. Spot howler monkeys yelling out their distinctive calls and snatch glances of colourful birds in the jungle canopy. After sunset, venture onto the water to see caimans engaged in the evening hunt. Explore the Anavilhanas Archipelago, one of the largest river island systems in the world. Track jaguars in the jungle and visit a local village on the east banks of the Rio Negro to learn about Amazonian traditions. When you reach Lago Janauari Ecological Park, you’ll search for three-toed sloths and collared anteaters in a dense forest populated by gargantuan trees. On the final leg of your journey, head to Encontra das Aguas, where the Rio Negro joins the Amazon River. Notice how the two rivers run parallel for long stretches before finally meeting and spot a pink river dolphin joining you in your journey along the river. Return to Manaus to continue your onward journey.

This Amazon cruise is a great addition to a longer trip to Brazil or South American tour.

This afternoon you embark on the Motor Yacht Tucano in Manaus, Brazil. You depart on the Rio Negro and as the vessel glides upstream you will have your first talk about Amazon environments. By late afternoon you enter one of the world's largest river island systems, the Anavilhanas Archipelago.

The boat will weave along a winding channel with rainforest on both sides in a riot of brilliant vegetation. Weather permitting, you will go for a launch excursion in the gnarled and dense flooded forest known as the Igapo. Along the river bank you may see some Squirrel Monkeys and you may hear the other-worldly growls of Howler Monkeys echoing through the primitive rainforest. The Amazon has one of the greatest collection of birds in the world and you are sure to see some of these brightly colored jewels perched in the treetops.

You return to the M/Y Tucano for hors d'oeuvres on the observation deck and a toast to the rainforest sunset. Following dinner you will embark in launches to search for nocturnal creatures such as the Caiman, the Amazon's crocodilians. You may also see one of the large night birds such as a Potoo with its bulging eyes and large mouth adapted to swallow the huge Mariposa Moths,

Shortly after sunrise this morning you explore the Anavilhanas Archipelago, a reserve that includes the world's largest system of river islands and also areas of tall dense rainforest. Here you will see the strange environment called the Igapo, the black water flooded forest where dense forests grow right out of the dark water of the Rio Negro.

Mid-morning you return to the vessel for a hearty Brazilian breakfast. After some time to relax, weather permitting you will disembark at mid-morning and will go for a walk in the type of rainforest known as the Terra Firme. Here you have a good chance to see the markings, if not the animals themselves, of some of the Amazon's great mammals like peccaries (wild pigs) or even a jaguar.

Around mid-day return to the vessel for lunch and a siesta. In the afternoon you will excursion the launches along the edges of the dense forest and listen to the sunset chorus of birds, howler monkeys, and frogs. Weather permitting, tonight you will have an excursion to spot caiman (the Amazon's crocodiles) and other nocturnal creatures. You will often see arboreal porcupines or sloths scrambling high in the limbs.

This morning you awaken to another remote rainforest area where you will explore launches early in the morning, and also walk in the forest in mid-morning. During the middle of the day the vessel will venture downstream to a small village on the east bank of the Rio Negro. Where you will visit the community to learn how traditions help families survive in the remote interior. Later in evening the vessel will weigh anchor and you will voyage downstream through the night to the Xiborena Peninsula that divides the two of the world's most storied rivers: the Rio Negro and the Amazon River.

Rising early, you will excursion in the Lago Janauari Ecological Park, a dense forest that is flooded with the coffee colored water of the Amazon River. You will explore a labyrinth of small channels overhung with gargantuan trees and vines. Listening to the chatter of creatures in the undergrowth, you will also keep your eyes open for monkeys, Three Toed Sloths, and the occasional Collared Anteater. By mid-morning you return to the M/Y Tucano for a hearty breakfast and some time to relax. Later in the morning you will foray off the vessel again to explore this environment rich in life.

Following lunch you will navigate to the "Encontra das Aguas", the several mile long joining of two of the world's greatest rivers, the Rio Negro and The Amazon. The dark and light waters run side by side for several miles without mixing. Often Pink River Dolphins and also Grey River Dolphins leap and cavort along this stark line of contrasting currents. You will cruise on the Amazon River until the late afternoon. On Brazilian maps this river is given the name Rio Solimoes - but it is the same vast, turbulent, mighty river that you know of as the Amazon. At this point in its course it has truly become the most magnificent river on the planet and carries fully 20% of all the fresh water on Earth.

Late afternoon you will have another launch excursion in a fascinating environment known as the Varzea where you may angle for piranhas or thrill at brightly colored birds that hunt in these the vast fields of waving grass. At sunset you will slowly begin to ascend the Rio Negro, cruising along but not stopping at the Porto de Manaus, one of the world's great ports. More than a thousand miles from the sea, Manaus is the major port for much of the entire Amazon. You will see boats of every imaginable shape and purpose that serve this continent sized forest. Tonight you will sample the national drink of Brazil, the Caipirinha and have a farewell dinner.

In the morning, after a hearty breakfast, you will disembark from the vessel at the riverside dock of the Hotel Tropical.

Please note that the day to day schedule must be considered approximate. Due to changing river levels and weather considerations, features and vessel course are altered and adapted to fit existing circumstances.
Degree of Difficulty: Good health is necessary. Though the trip does not include endurance hiking, participants should be able feel comfortable walking at a leisurely pace for 2 to 3 hours at a time.