Best of the Lakes

Few landscapes in the world can offer such beautiful scenery as the Chilean Lakes District, where crystal lakes, stunning volcanoes and ancient forests make it a truly unforgettable place. 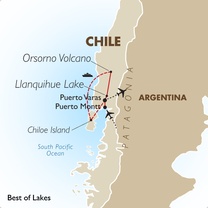 On arrival at Puerto Montt airport, transfer to the attractive lakeside town of Puerto Varas, a short ride away. It is a charming 19th Century town originally settled by German colonists and this is evident from the architecture and traditions of Puerto Varas. Your tour starts with a visit to Phillipi Hill which overlooks LakeLlanquihue on which Puerto Varas is located. This is Chile’s second largest lake. From here, you will have spectacular views of the surrounding area. Return to the town and tour its streets and avenues noting how well the lawns and gardens are maintained.  Next visit Calvario Hill for more panoramic views. Then travel along the shores of LakeLlanquihue to the city of Puerto Montt and the attractive fishing village and resort of Angelmo with its handicraft market and where the German influence is again present. Return later to Puerto Varas.

The next day drive once more around LakeLlanquihue past houses of the original German settlers. Arrive at Frutillar, a town separated into two parts, Low Frutillar with its natural beauty and High Frutillar situated o a steep hill with its maze of shops and houses.  Here visit the Museum of German Colonization after which head to Puerto Octay, a port founded in 1854 with rich and varied architecture. Next stop is at Ensenada the gateway to the Orsono Volcano arriving at the ski centre from which you will walk on foot to a vantage point to view the summit. The Orsono Volcano has been likened to Mount Fuji in Japan due to the similarity in appearance. Return once again to Puerto Varas.

Today brings a visit to Chiloe Island reached by ferry departing close to Puerto Varas. Cross the Chacao Channel and land at Ancud where you will enjoy a stop at the Mercado Municipal known for its produce and seafood. Afterwards, visit the Chilotur Cultural Centre with its exhibits of relics, photographs and other artifacts. Continue to Fort San Antonio built in 1770, a well preserved fortress with scenic views of the area.  The next stop is at the capital of Chloe Island, Castro wit its unique and typical regional architecture. A highlight will be the colourful houses built on stilts along the seashore. One final stop is at the village of Dalcahue, an attractive fishing village to end your Best of the Lakes visit.

The journey begins this morning in Puerto Montt where you will be met at the airport. You'll then drive to Puerto Varas, a beautiful town just 15 minutes away located on the borders of Lake Llanquihue. Just kilometres before entering town, enjoy a splendid view of the Lake's bay and the magnificent Osorno Volcano. Take note of Puerto Vara's German architecture as a result of the significant German immigration in early twentieth century.

Arrive at your hotel and have a couple of hours at leisure to check-in, have lunch (own expense) and rest for a while.

The tour begins in Puerto Varas, the charming 19th-century port town settled by German colonists. To get the lay of the land, ascend Phillipi Hill, which overlooks the bay and the city. The hill is also covered with intriguing native trees. Return to town and tour its principal streets and avenues, which boast painstakingly maintained lawns and gardens. Take in yet another bird's-eye view from Calvario Hill, then head out of town on Costanera Avenue, which skims the edge of big, beautiful Llanquihue Lake - in constant view of the equally big and beautiful Osorno volcano. Then the tour continues southwards to the city of Puerto Montt and the fisherman's cove known as Angelmo and the handicraft market located in the same area of Angelmo.

Located on the shore of the biggest Chilean lake, Llanquihue, and right opposite the magnificent snowcapped Volcan Osorno, it is a truly captivating lake resort. Defying many people's expectations of South America, this place is often found too clean and organized! The German influence is visible at every step - names like Kaiserseehaus or Frau Holle can be seen everywhere and restaurants offer "Onces Alemanas" with apple strudel. A number of houses have signs saying they sell the yummy Kuchen (a type of big tart).

Today you'll start touring the city of Llanquihue and drive around the lake of the same name visiting the viewpoint of the Germans and seeing the houses of the old German settlers. You'll then head for Frutillar which is completely separated in two parts-Frutillar Bajo (Low Frutillar) and Frutillar Alto (High Frutillar). The lower area surrounds you with picturesque beauty, while the higher part, situated up a steep hill is just a chaotic pile of houses and shops. After your visit to the Museum of German Colonization in Frutillar you'll continue onwards to Puerto Octay, another port on the lake founded in 1854. The turn-of-the-century architecture here is particularly worth noting.

You'll then proceed towards Ensenada to take the route to the majestic Osorno Volcano arriving at the ski centre called "La Burbuja" at a height of 1350 metres. From here you'll continue on foot to enjoy the panoramic views and take pictures and having a unique view to the summit of the Osorno Volcano and Calbuco Volcano with their snow-capped peaks and to the Lake Llanquihue.

You'll start your day early. After breakfast you'll head for Pargua to board a ferry to cross the Chacao Channel. After 30 minutes of sailing you reach Chacao and continue by land to Ancud directly to the traditional Mercado Municipal, where one can choose from a stunning collection of produce, fish seafood, and Chilote arts and crafts; then, visit the Chilotur Cultural Center that exhibits relics, photographs, embalmed birds and replicas as well as displays explaining the myths and legends of Chiloe Island and the San Antonio Fort, an old fortress that dates back to the 18th century. The trip continues towards Castro located on the shores of a fjord with calm waters, it is the main marketplace for products bought and sold by the inhabitants of neighboring islands. Its unique and typical architecture is particularly noteworthy as houses are built on stilts by the seashores and are known as "palafitos". On the way back, you will visit Dalcahue, a lovely fisherman village where you will visit the craft market. Lunch menu included en route.

After breakfast you'll be transferred to Puerto Montt Airport for your onward travel.