Cartagena Jewel in the Stone 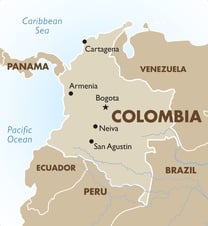 Unabashedly the glamour puss of Colombian cities, Cartagena blends South American energy with Caribbean charm. Experience it on this 3 day stopover, including a half day tour visiting the Convent of La Popa, San Felipe’s Fort and the handicraft stores of Las Bovedas.

With a day at leisure, be tempted by a trip to the Rosario Islands, home to crystal clear waters and a vast range of marine life. Or stroll around the city’s many historical monuments and colourful streets.

Located in the tourist area of the city, the hotel is close to boutiques, jewellers, casinos, galleries and business centres, with direct access to the beach in a privileged location. The hotel has a convention hall with high-tech A/V equipment. In the bar, guests can enjoy cocktails, tropical drinks and a selection of liquors. This beach hotel features air conditioning, Wi-Fi, as well as a restaurant.

We have adopted a Biosecurity Management System that covers all those involved in our value chain, all cleaning and disinfection processes have been strengthened and in this way we provide security to our collaborators, clients and all our visitors.

Dann Hotels in accordance with the Health Emergency COVID-19, at the time of Check-in, Colombian guests are asked for identification of the EPS (Health promoting entity) and for our foreign guests support or to have active international medical assistance insurance .

Due to the coronavirus (COVID-19), some facilities or services of the Hotel, will present closings or schedule changes, more information will be provided at the time of check in.