DELUXE | PRIVATE-GUIDED: Combining the verdant foothills of the Quindío Coffee Region and the best that historic and vibrant Cartagena has to offer, this is the perfect introduction to the best of Colombia. Eat well, unwind, and discover the gateway to South America for yourself. 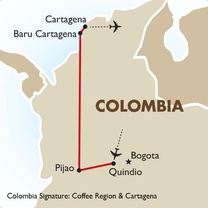 Begin in the foothills of the Quindio Coffee Region, where you can explore rural Colombia in all its splendor. A variety of Andean altitudes create a dynamic landscape with diverse scenery, flora, and wildlife. Coffee is one of the pillars of Colombia’s economy, and a tour is the best way to understand what makes this region tick. Medicinal plants are also harvested here, and a visit to El Patio reveals how these are used in daily local life. This is a tour for people who want to learn about coffee production from a community perspective, making it a great chance to explore everyday Colombia.

Your visit to Cartagena is divided into two parts. First, soak up some sun and beach time in Baru Cartagena. Just 45 minutes from the city by boat, this gorgeous island invites you to enjoy its white and pink sands and turquoise waters for a full day at leisure before returning to the city. Spanish, African, and indigenous influences all come together in colourful Cartagena. A half-day walking tour will show you why this is one of the world’s favourite Caribbean cities. Cartagena has survived piracy, the Inquisition, and in more recent times, gentrification to remain a Colombian treasure. A visit to the Museum of Cartagena will help bring the city’s past to life as you explore its streets, fortifications, and local neighbourhoods such as Getsemani.

Upon arrival by air to the Quindío Coffee Region, you will be privately transferred to your hotel. If you land at Armenia Airport (AXM), approximate transfer time is 45 minutes; if arriving into Pereira Airport (PEI), the transfer will take roughly 2 hours and 15 minutes. With its rolling hills, covered with green coffee plants and dotted with quaint, brightly-painted haciendas, this UNESCO listed landscape represents some of the most stunning scenery in Colombia. The adage that the journey is as important as the destination certainly applies to this region, as every twist and turn is rewarded with spectacular views and new perspectives. The coffee region is the rural heart of Colombia, where pastoral life continues as it has done for centuries, harvesting coffee and plantains as well as numerous other crops in the fertile land.

Coffee of course plays a pivotal role in the local economy and has molded the culture of the region. Its cultivation, harvesting and processing remain an important economic resource. The region is comprised of 3 Colombian departments: Caldas, Risaralda and Quindio. They run north-south along the central range of the Andean Mountains and are flanked to the east by the chilly snow-capped peaks of the Los Nevados National Park. Considering their relatively small size, the three departments are incredibly diverse, with altitudes ranging from below 1,000m (3,280ft) to over 5,000m (16,500ft). The geography, scenery, climate, flora and fauna are all reflected by these extremes in altitude variation.  In the space of just a few hours’ drive, the scenery can change from the rugged beauty and harsh temperatures of the towering mountain peaks to the sultry heat of the Cauca Valley. In the late afternoon, after settling into your room, join a hosted orientation walk of the haciendas grounds.

The “Wakecup” Coffee Tour is a unique way to discover Colombian coffee and is considered by many to be Colombia´s best coffee tour, and for good reason; this experience breaks the mold. Over the course of this 8 hour tour, you will visit a traditional farm to taste what’s in season, and set out on a private jeep ride through the local surroundings. Visit a couple of families who have shown that living off coffee is possible and who have turned their farms into sustainable ventures. You will also visit El Patio where you will learn about the medicinal plants that are used in daily lives throughout the region. This experience is for people looking for something more than an explanation of the "seed to the cup" journey, instead focusing on discovering the local characters in Pijao who reveal that in Colombia, coffee is made by a whole community: those who buy it, sell it, transport it. A highly recommended experience, the “Wakecup” Coffee Tour is a bridge that brings travelers from all over the world to experience the world of the Andes, all while speaking a common international language: coffee. Lunch is included.

The allure of the Caribbean coast is perfectly epitomized by Cartagena de Indias, often described as absurdly photogenic, and one of the most iconic destinations in Colombia. During your day at leisure in Baru Cartagena, you’re invited to kick back and relax. Sofitel Barú Calablanca Beach Resort creates a unique synergy between nature and architectural design. With LEED certification and drawing inspiration from the surrounding biodiversity, each detail is carefully considered using natural materials to evoke a feeling of luxury, which translates to relaxation, sophistication and fun à la plage.

After breakfast this morning, make your way to the nearby docks and board a boat with shared service to Cartagena. The boat ride will take approximately 1 hour. Upon arrival to the docks at Cartagena, you will be met by a driver who will privately transfer you to your hotel, which will take approximately 20 minutes. Founded in 1533 by Pedro de Heredia, Cartagena offers a wonderful insight into the life of the region through the 16th to 18th centuries by way of beautiful churches, atmospheric plazas and fascinating historical sites. Cartagena enjoys year-round tropical temperatures, and the historic old town and Getsemani neighborhood – with their dramatic colonial buildings – juxtapose strikingly with the nearby Boca Grande beach peninsula and its Miami-style, exclusive high-rise towers. Cartagena was the Caribbean gateway port of the Spanish. Here they stored the riches plundered from the interior before shipping them back to the Old World.

Unsurprisingly the city was a draw for pirates, most notably Sir Francis drake in 1586, who "mercifully" agreed not to destroy the city in return for a substantial ransom that he hauled back to England. After the attack, plans were made to fortify the city with a defensive wall and fort which remain today, and took nearly 200 years to complete. The Spanish finished them just 25 years before Cartagena gained Independence in 1821. The Costeños, locals, are an open and fun-loving people. They combine the best of the Caribbean with diverse backgrounds and have a delightfully laid-back attitude.

This passionate and vibrant city with its rich history and well-preserved colonial architecture exudes character. Mix in African rhythms, indigenous influences, and Spanish colonial splendor, and it’s no wonder that Cartagena is so widely considered an amazing destination. In the early evening enjoy he opportunity to taste some of the finest rums from regions of Colombia including aged rum of 3 and 8 years old at the el Baron Cocktail bar. The rum which is produced from sugarcane by-products is a common drink in Colombia throughout the regions and has been awarded several accolades throughout the world including the Superior taste awards in 2010 and 2012 in Brussels.

Carved from a colourful history rife with piracy, Caribbean heat, fusions of African, indigenous and European culture, Cartagena is Colombia’s living museum. Colour splashes every corner, balconies overflow with blossom, and energy seeps beneath the ancient wooden doors of hotels, restaurants and Casa Privadas. Your 6 hour tour will take through the old town under the Puerta Del Reloj (clock tower entrance), a symbol of Cartagena, into the Plaza de los Coches. Your guide will divulge the myths and legends, histories and stories of Cartagena from ancient time’s right up to the present. From the Plaza San Pedro Claver with its stunning church, on through to the Plaza Bolivar with its shady areas and where a fresh lemon juice can be enjoyed.

During the walk you’ll also visit the Museum of Cartagena. The former headquarters for the Inquisition of 1610, the building itself is considered one of the most characteristic colonial constructions of its time. Throughout its interior visitors to the museum will find instruments of torture and prison cells. A short walk away is San Pedro Claver Cloister, monastery and museum; built in homage to the protector of slaves, San Pedro, and which serves as reminder of the turbulent past of Cartagena, and more broadly, the Americas. The Cloister where Pedro Claver lived and died has become a special place of silence, and reflection – a shrine to the life's work of this extraordinary man. Adjoining the monastery is a beautiful baroque church, designed by German and Dutch architects. Here, at the high alter, within a glass encasement, lie the remains of Saint Pedro Claver, “the slave to the slaves.”

Leaving San Pedro Claver, make your way to Celele restaurant for lunch (included), and later continue your walk through the streets of Getsemaní. Unlike the rest of the colonial part of the city, where many families have sold their homes to be converted into boutique hotels or exclusive restaurants, Getsemani still retains much of its traditional culture. Many of the original families from the neighbourhood still live here, creating a hip yet family-friendly atmosphere. The local residents share their space with artists, bohemians, restaurateurs and poets in this eclectic little community. There is more to Cartagena that just the colonial walled city, and getting out to explore beyond the ancient walls is very much part of the fun.

After an incredible week in Colombia, it is time to return home. Following breakfast, you will be privately transferred to the airport. Approximate transfer time is 30 minutes.

Prices are "from" per person based on twin/double share accommodation and for travel in low season (advertised pricing based on 16 May 2022 departure – alternative dates available). Seasonal surcharges and blackout dates may apply. Limited seat/spaces and all pricing is subject to change and availability. Rates for single or triple travellers are available on request - please inquire.