The perfect one week tour to experience the delights of colonial Ecuador as well as be amazed at the breathtaking scenery including majestic towering active volcanoes. Visit the Equator, have lunches at special restaurants and enjoy an exhilarating train journey through the mountains. 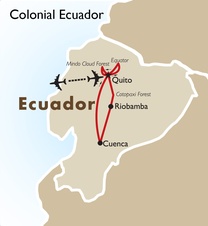 Start your Ecuador itinerary in Quito, the highest capital city in the world with a 3 night stay. The following morning commences with a visit to the old quarter of the city with its colonial architecture and old world charm. It is actually the best preserved historic centre in the Americas. Afterwards head to the highest point in Quito, Panecillo Mirador where you will be amazed at the views of both old and new Quito. You will have lunch this day at San Juan Hill. Later travel to the Equator located 25 kilometres/15 miles north of the city. Your guide will explain the gravitational effects here and give a briefing on the indigenous Ecuadorean cultures.

The next day brings a visit to the Cloud Forest of Mindo outside Quito. Its lush green vegetation includes orchid farms, butterfly gardens, a cable car ride and gushing waterfalls. The afternoon is at leisure back in Quito.

Head south the next morning to Cotopaxi, the conical active volcano which last erupted in 1904. Have lunch at an old colonial hacienda before continuing south to Riobamba for overnight.

Riobamba sits in the shadow of the dominating giant volcano, Chimborazo which rises to a height of 6310 metres/20,500 feet and which is Ecuador’s highest peak. From here, you will have an amazing train ride through the Devil’s Nose, a switchback carved into the mountains. During the ride you will experience a series of breathtaking views. En route to Cuenca, stop at the Ingapirca ruins, the largest Inca ruins in South America. Visit the sacred Temple of the Sun here. Eventually arrive at Cuenca for a 2 night stay.

The city of Cuenca, Ecuador’s 3rd largest, is surrounded by mountains. The centre of the city is a UNESCO World Heritage Site and dates back to the 18th Century. Enjoy a tour of the old city with its markets, craft shops and museums.

The next day explore some of the many villages around Cuenca, known for their artisan studios and workshops as well as their lively markets selling everything from ponchos to vegetables. A highlight today will be a visit to Ecuagenera, an orchid growing laboratory where 12 new species have been discovered. Later fly back to Quito for overnight ending your Colonial Ecuador experience.

On arrival into Quito you will be met and transferred to your hotel. The remainder of the day is at leisure.

Quito, the capital of Ecuador, was founded in the 16th century on the ruins of an Inca city and stands at an altitude of 2,850m. Despite the 1917 earthquake, the city has the best-preserved, least altered historic centre in Latin America. The monasteries of San Francisco and Santo Domingo, and the Church and Jesuit College of La Compania, with their rich interiors, are pure examples of the 'Baroque school of Quito', which is a fusion of Spanish, Italian, Moorish, Flemish and indigenous art.

You'll set off from the modern part of the city and continue on foot through Quito's Old Town to admire the colonial art and architecture of the XVI to XVIII centuries. Afterwards you'll have the opportunity to take in spectacular views of both colonial and modern Quito from the "Panecillo Mirador" which is the highest point on the valley floor. A special treat is lunch at "El Ventanal" restaurant on San Juan Hill. The restaurant is characterised by a cozy atmosphere, minimalist decoration and special attention to service. El Ventanal offers an extensive selection of international gastronomy with an Ecuadorian flavor.

Journey north to the Equator where your guide will show you the differences in the gravitational influence on either side of the equatorial line, as well as give you a brief overview of indigenous cultures.

After breakfast depart from Quito and just hours down the road you will come across the Cloud Forest of Mindo.

One of the most visited cloud forests in Ecuador Mindo has offers attractions such as tubing, orchid farm visits, butterfly gardens, cable car and waterfalls.

After lunch, return to Quito.

Early in the morning, you will travel south along the Pan-American highway and through the Avenue of the Volcanos. You are surrounded by over 12 active, extinct and dormant volcanoes offering stunning vistas everywhere you look. You will stop at a locals house and be invited in to learn the Andean way of life. Lunch will be at La Cienega, an old colonial hacienda that now functions as a restaurant and hotel.

Continue onto Riobamba, a small city with French influenced plazas and Cathedral.

The journey begins in the small city of Riobamba. Like many cities in the Ecuadorian Andes, Riobamba sits in the shadow of a giant volcano, Chimborazo, which at 6,310 meters enjoys the distinction of being Ecuador's highest peak. The train travels south from Chimborazo through a number of small villages and large expanses of open country before arriving at the small town of Alausi.

The main attraction of the Devil's Nose ride is the series of switchbacks that engineers carved into the mountain as a way to allow trains to climb a gradient of 1-in-18 from 1800 to 2600 meters, by going forwards then backwards up the tracks. As the rail cars go forward and backward over the three or four zigzags, they will occasionally stop to allow another car to pass. A hundred years after it was constructed, the steep grade of the Devil's Nose stretch of track precludes its use as a freight or efficient passenger line, but is a way for present-day explorers to catch a glimpse of the rugged and breathtaking Ecuadorian countryside.

From here you will continue your trip to Cuenca, visiting the Ingapirca ruins. They look like a small fortress. Some archaeologists think that its main elliptical platform structure (usnu), referred to as Temple of the Sun, was used for religious purposes. Its location on the Inca road that linked the northern and southern capitals of the Inca Empire, Quito and Cusco respectively, suggests it may have also served as a resting point for chasquis - runners that carried messages for the royal court.

The structure itself has outstanding Inca stonework. Its doorways and niches were designed in the trapezoidal shape that is the unmistakable Inca style. From here we journey through the many volcanoes to the colonial gem of Cuenca.

Overnight in a boutique hotel in Cuenca.

Santa Ana de los Rios de Cuenca is set in a valley surrounded by the Andean mountains in the south of Ecuador. This inland colonial town (entroterra), now the country's third city, was founded in 1557 on the rigorous planning guidelines issued 30 years earlier by the Spanish king Charles V.

Cuenca still observes the formal orthogonal town plan that it has respected for 400 years. One of the region's agricultural and administrative centres, it has been a melting pot for local and immigrant populations. Cuenca's architecture, much of which dates from the 18th century, was 'modernized' in the economic prosperity of the 19th century as the city became a major exporter of quinine, straw hats and other products.

Lunch is at a typical restaurant in the historic centre. Your guide will lead you on an exploration of the markets, churches, museums and craft shops for which the city is known. To the surprise of many, the Panama hat originated here.

Cuenca is surrounded by villages where skilled artisans work wonders. Among these are Gualaceo, with its markets that are especially crowded on Fridays and Sundays, where you can observe hand-woven shawls, ponchos and lots of fruits and vegetables on sale.

You also visit Bulcay for Ikat weaving and Chordeleg "chorro de oro" (waterfall of gold), a village specialized in jewelry - mainly gold and silver - with fine filigree work; handmade ceramic pottery and the chance to observe people weaving Panama hats and other items made of toquilla straw. One of the highlights on this trip is the visit to Ecuagenera, the most important orchid growing laboratory in Ecuador, whose aim is to study and preserve the different species existent through time. Among their achievements, they have discovered 12 new species and 1 gender.

During the visit you could observe hundreds of species and learn a bit about these amazing and beautiful plants. Lunch in a countryside hacienda. Your afternoon flight will find you back in Quito.

Transfer to the airport for your onward flight.

All departures are guaranteed with minimum of 2 participants. Maximum group size: 16 people