Discover unique Salvador, the first capital of Brazil. With an option to stay in the heart of the Colonial Town or on the amazing coastline, this tour is an essential Brazilian experience. 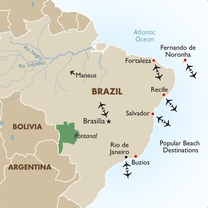 With a culture as colourful as its architecture, Salvador has a distinctly different feel (and accent) to the rest of Brazil. Spend 3 days getting to know this exciting corner of Latin America, where just a touch of Africa creates its own distinctive flavour.

Staying on the beach just outside the city, you’ll immerse yourself in Salvador’s history on day two. This is Brazil’s first colonial capital dating back to 1549. A half day city tour takes you to Barra Lighthouse for a fantastic view over the city’s best beach. Visit Teatro Castro Alves, then go on to the Pelourinho, Salvador’s UNESCO World Heritage listed historic centre to enjoy the city’s Baroque architecture at its finest.

The Vila Gale Salvador Hotel is located right on Praia de Ondina in Sao Salvador da Bahia and is ideal for leisure or business travellers. The hotel is only a 20 minute drive from the international airport. The hotel features 224 rooms with a full range of facilities.

Walking the streets of Salvador's historical district feels like being taken back to ancient times in Brazilian history. Visit the first fort that was built at the entrance point of the bay of All Saints to protect the city from attack. A stop at the city center is a must for anyone staying in Salvador da Bahia! Your tour begins at the Barra Lighthouse, passes the Teatro Castro Alves, home to the Bahian Symphony Orchestra and on to the Balet (ballet) de Castro Alves. The Forte de Sao Pedro and Praca Castro Alves are on route to the Historical Center of Pelourinho, which offers something to see along every street. Don't miss out on the historical churches, cafes, restaurants, shops and pastel-hued buildings.

With more than a thousand houses, churches and monuments built since the 16th century, Salvador makes up the greatest collection of Baroque architectural heritage in Latin America.