Enjoy a 5 day cruise of the world famous Galapagos Islands while sailing aboard Coral I, a modern vessel but with classic beauty. See the sights by hiking, snorkeling and exploring. 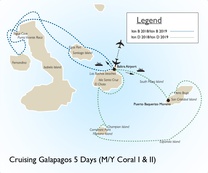 Nowhere embodies the spirit of eco-travel like the Galapagos Islands. They have inspired nature lovers all the way back to Charles Darwin, and today draw visitors from all parts of the globe. As the world’s second largest marine reserve after the Great Barrier Reef, the Islands are perhaps best experienced on a guided cruise. See Blue-footed Boobies, sea lions, and the famed Galapagos Tortoise. Then relax after each day’s discoveries aboard the Coral I. This first class vessel is designed for space and comfort, sleeps 36 guests and offers connecting cabins for families or larger groups.

This 5 day journey starts at Ballena Bay, at the base of Dragon Hill. The Bay’s green sands are caused by volcanic olivine crystals, creating a truly unique snorkeling experience. You’ll share the bay with marine iguanas and a range of sea birds.

On the Galapagos’ largest island, Isabela, follow the trail to Darwin’s Salt-water Crater Lake. Then explore the shoreline to see a wide variety of birds including Blue-footed Boobies, cormorants and around 2,000 Galapagos Penguins – the only species found north of the equator. The widest range of endemic sea fauna in the Galapagos can be found at nearby Fernandina Island, including sea lions and Sally Lightfoot Crabs.

Back on Isabella, cruise around the mangrove covered coast and visit a volcanic ‘black beach’, where giant tortoises, land iguanas and flightless cormorants roam, depending on the season. Snorkel amid sea turtles, sea lions and tropical fish. Then see a coral reef lifted by volcanic activity in 1954. On Santiago Island, flamingos descend on the lagoon near Sullivan Bay. There are a number of fascinating inlets here, including Buccaneer Cove, a safe haven for pirates and whalers in the 18th and 19th centuries.

Spend your final day exploring the highlands of Santa Cruz, where giant tortoises roam in the wild, before your return to Quito.

Today marks your departure from mainland Ecuador to Baltra (approx. 2 and half hour flight). You will be picked up at the airport by your guides and taken on a ten minute bus drive to the pier to board the Corals.

This afternoon you will have a dry landing. In the mountains of Galapagos is possible to admire different kinds of birds, such as tree and ground finches, vermillion flycatchers, paint-billed crakes, yellow warblers, and cattle egrets (usually standing on the tortoises' shell). The journey to the reserve offers great opportunities to see the contrasts that the island offers in reference to the variety of ecosystems. The road goes from the coast through the agricultural zone and straight up to the dense humid forests. Often, Galapagos Giant Tortoises are also seen on the way, wandering through pastures in the paddocks. This spot is a birdwatchers' haven since almost every land bird present on the island lives or migrates here.

Explore Vicente Roca point, a high peak of land created out of remains of a tuff cone, with two protected turquoise coves on both sides. One of them, the Bolivar Channel is one of the richest marine ecosystems on Earth. This place is only accessible by water, with great opportunities for deep-water snorkeling. In this part of the Galapagos, the upwelling of cold water currents from the west, offer an abundant plankton supply for marine species like red-lipped batfish, seahorses, frogfish, nudibranchs, octopus, and the mola-mola or sunfish. It is common to observe dolphin pods, sea lions rafts, and tuna banks. The dinghy ride along the coast will allow observing a great diversity of seabirds like noddies, brown pelicans, Galapagos penguins, flightless cormorants, Nazca and Blue-footed boobies are often seen feeding all at once during the cold season (May - December). Whale watching is also common while navigating.

Later, make a dry landing at Espinosa Point, the only stop on Fernandina, from where you can see the island of Isabela across the Bolivar Channel, an area that boasts some of the highest diversity of endemic sea fauna in the Galapagos. The largest, most primitive looking race of marine iguanas are found mingling with sea lions and Sally Lightfoot Crabs. This is a wonderful opportunity to encounter flightless cormorants at their nesting sites, Galapagos Penguins and the Galapagos Hawk, the King of predators on the Islands.

This morning, make a wet landing on a volcanic 'black' beach. Depending on the season, you may find giant tortoises, land iguanas and the unusual flightless cormorant. After a short walk inland, snorkeling time is allotted, giving you yet another chance to swim with sea turtles, sea lions and countless tropical fish. Urbina Bay features a wide variety of plant life that changes depending on season. You can observe the beautiful colours of plants that attract different insects, birds and reptiles. The tour will explore the uplifted coral reef that resulted from 1954 volcanic activity, with a spectacular view of Alcedo Volcano.

This afternoon, make a dry landing on Galapagos' largest island where you will learn about the eruption of the five volcanoes that form it. The trail leads to Darwin's salt-water crater Lake and excellent views of lava fields and volcanic formations. Later, return along the same path for a dinghy ride along a shoreline full of marine wildlife where you will admire a variety of seabirds such as Blue-Footed Boobies, Brown Noddies, terns, flightless cormorant and depending on the season, Galapagos Penguins. Galapagos Penguins, which only reach 35cm in height, are the only penguin species in the world to extend its range into the northern hemisphere along the equator. They are monogamous and lay their eggs in small cracks of lava on the lower parts of the island near the shoreline as not to be reached by the ocean waves. The population of penguins on the islands is about 2 000 individuals most of which live on this western portion of Isabela with others scattered further south on the island. You will have an opportunity to snorkel in deep water. Graffiti believed to be have been left by 19th century pirates is a curious reminder of an intriguing past.

This morning you will make a wet landing. Egas Port is a black volcanic sand beach, visited by Darwin in 1835. The first section of the trail is formed of volcanic ash (eroded tuff) and the other half is an uneven terrain of volcanic basaltic rock. The unique, truly striking layered terrain of Santiago shore is home to a variety of animals including the bizarre yellow-crowned night heron and marine wildlife including lobster, starfish and marine iguanas grazing on algae beds alongside Sally light-foot crabs. It is easy to see colonies of endemic fur seals swimming in cool water volcanic rock pools.

Later today, you will make a wet landing. This site located at the southeastern portion of Santiago Island is of important geologic interest. It features extensive relative young pa-hoe-hoe lava flows formed during the last quarter of the 19th century. In the middle of the lava flow, older reddish-yellow-colored tuff cones appear. Mollugo plants with their yellow-to-orange whorled leaves usually grow out of the fissures. Walking on the solidified lava gives the impression of been in another planet. Tree molds are found, indicating that in that position large size plants grew in small crevices, until the lava flow of past eruptions burned down the flora of the island.

This morning you will make a wet landing. On the north side of Santa Cruz; behind the beach lies two small flamingo ponds were iguanas sunbathe, see coastal birds, Darwin finches, mockingbirds, and gulls, as well as interesting native vegetation like red and black mangrove, salt bushes. This beach is one of the main sea turtles nesting sites in the Galapagos. A turtle can lay eggs 3 or 4 times per season with an average of 70 eggs each time. At this paradisiacal site, we will also find the remains of barges that sank a long time ago, when the United States Navy operated a base during World War II on Baltra Island. Local people modified the word barges to "Bachas".

Later, you will be transferred to the airport for your return flight to mainland Ecuador.